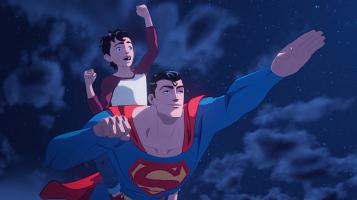 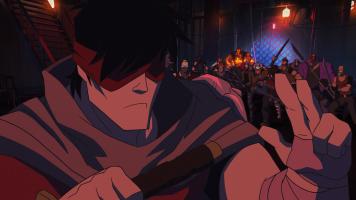 On Thursday, October 6, WBHE will host the World Premiere of Aqua Teen Forever: Plantasm at 8:30pm on Main Stage of NYCC. In addition to the screening, the event will lead off with a panel discussion amongst filmmakers and cast, including Carey Means and Dana Snyder, who voice Frylock and Master Shake, respectively, and series co-creators and the film’s directors/writers Dave Willis (who also voices Meatwad) and Matt Maiellaro.

And on Saturday, October 8, actors Ron Yuan (voice of Kuai Liang/Sub-Zero) and Courtenay Taylor (voice of Kira), producer/director Rick Morales and screenwriter Jeremy Adams will offer behind-the-scenes details and entertaining anecdotes about the making of Mortal Kombat Legends: Snow Blind on a panel at 3:30pm on Main Stage.

In addition, a limited number of free tickets remain for a special premiere screening of Mortal Kombat Legends: Snow Blind on Wednesday, October 5 at 6:30pm at Hudson Yards. See below for more details and instructions to request tickets.

WBHE panels will spotlight never-before-seen footage, discussions with filmmakers and actors. All three panels will be live-streamed through NYCC’s partnership with Popverse, and specific panel links will be found via the NYCC website at www.newyorkcomiccon.com.

About Aqua Teen Forever: Plantasm
Be among the first to experience the all-new mystery-adventure feature-length film based on the famed Adult Swim series when Warner Bros. Home Entertainment presents the World Premiere of Aqua Teen Forever: Plantasm. The R-rated film features everyone’s favorite rascals, the Aqua Teens: the brainy Frylock, the mouthy Master Shake, the loveable Meatwad, and everyone’s favorite perverted neighbor, Carl, as they split up then get back together to fight everyone’s favorite corporate overlord, Amazin, led by everyone’s favorite tech mogul, Neil and his trusty scientist sidekick, Elmer. In addition to the screening, filmmakers and key cast members will hold a panel discussion, including audience Q&A. Panelists confirmed thus far are Carey Means (Aqua Teen Hunger Force, The Brak Show) and Dana Snyder (Aqua Teen Hunger Force, Squidbillies), who voice Frylock and Master Shake respectively, and series co-creators Dave Willis (who also voices Meatwad) and Matt Maiellaro. The movie was also written and directed by Willis and Maiellaro, and produced by Williams Street Productions. Aqua Teen Forever: Plantasm will be available on Digital, 4K Ultra HD and Blu-ray starting November 8, 2022.

About Batman and Superman: Battle of the Super Sons
Witness the unveiling of Warner Bros. Animation’s first-ever all-CG animated, feature-length film when Warner Bros. Home Entertainment presents the World Premiere of Batman and Superman: Battle of the Super Sons. Ahhhh, to be young … and charged with saving the world from impending doom! That’s the burden that 11-year-old Jonathan Kent and reluctant young sidekick Damian Wayne face in this all-new DC Animated Movie. On his birthday, Jonathan Kent learns his dad is Superman and that he has latent superpowers of his own! He also meets the legendary Dark Knight and current Boy Wonder, Damian. But when the two boys are forced to team up to protect their loved ones from a hostile alien force, will they become the Super Sons they’re destined to be? Following the screening, filmmakers and key cast members will hold a panel discussion, including Jack Dylan Glazer (Shazam!, Luca, It) and Jack Griffo (The Thundermans), who lead the voice cast as Jonathan Kent and Damian Wayne, respectively, alongside Travis Willingham (Critical Role, Sofia The First) as Superman/Clark Kent, Laura Bailey (The Legend of Vox Machina, Naruto: Shippûden) as Lois Lane, director Matt Peters (Justice League Dark: Apokolips War), screenwriter Jeremy Adams (Mortal Kombat Legends franchise) and supervising producer is Rick Morales (Injustice, Batman: Return of the Caped Crusaders). Batman and Superman: Battle of the Super Sons will be available on 4K Ultra HD Blu-ray Combo Pack, Blu-ray and Digital starting October 18, 2022.

About Mortal Kombat Legends: Snow Blind
Warner Bros. Home Entertainment marks the 30th anniversary of the blockbuster Mortal Kombat video game series with an inside look at the making of Mortal Kombat Legends: Snow Blind, the third in a series of MK-inspired feature-length animated films. Mortal Kombat Legends: Snow Blind finds vicious, power-mad Kano determined to take over Earthrealm, one soul at a time. Assisted by a trio of cold Black Dragon mercenaries, he embarks on a brutal assault from town to defenseless town. The choice is simple: kneel or be annihilated. But when the cocky and talented but undisciplined Kenshi doesn’t take a knee, Kano and his clan destroy the young warrior, taking his eyesight and his confidence. Under the tutelage of reluctant, retired Kuai Liang, the only one powerful enough to challenge the malevolent Kano, Kenshi finds renewed hope and a clear path to redemption. But will it be enough to stop Kano from decimating all of Earthrealm? The presentation will include thrilling film clips and an entertaining panel discussion amongst Ron Yuan (Mortal Kombat 11, Mulan), the voice of Kuai Liang & Sub-Zero; Courtenay Taylor (Wonder Woman: Bloodlines), the voice of Kira; producer/director Rick Morales (Mortal Kombat Legends franchise, Injustice) and screenwriter Jeremy Adams (Supernatural, Justice Society: World War II). Produced by Warner Bros. Animation in coordination with NetherRealm Studios and Warner Bros. Games, Mortal Kombat Legends: Snow Blind arrives from Warner Bros. Home Entertainment on Digital on October 9, 2022 and on 4K Ultra HD Combo Pack and Blu-ray on October 11, 2022.

Ticket Information
Fans wishing to receive free tickets to the World Premiere of Mortal Kombat Legends: Snow Blind on October 5 must apply via email to WBHE.RSVP@gmail.com. The body of all fan RSVP emails need only include the (1) name of the entrant, (2) valid email address, and (3) the number of tickets being requested (limit two per entry). Tickets to the event will be distributed on a “first come, first served” basis, and fans will be notified via email. Please note that Mortal Kombat Legends: Snow Blind is Rated R and anyone under 17 years of age must be accompanied by a parent or adult guardian.

Batman and Superman: Battle of the Super Sons, the latest entry in the DC Animated Movie line, arrives October 18, 2022 on Blu-ray and Digital from Warner Bros. Home Entertainment. Check out the dedicated The World’s Finest subsite for more on the upcoming title, and stay tuned for further updates. Additionally, special The World’s Finest coverage for Mortal Kombat Legends: Scorpion’s Revenge and Mortal Kombat Legends: Battle of the Realms is also available.