HBO Max has released the official trailer for Harley Quinn: A Very Problematic Valentine’s Day Special, an upcoming Harley Quinn animated special, debuting February 9, 2023 exclusively on the U.S. streaming service. The animated special spotlights Harley and Ivy, among others, celebrating Valentine’s Day together. The official trailer, plus press details provided by HBO Max, can be found below.

HBO Max and Warner Bros. Animation describe the special as below:

Written by ALAN BURNETT and PAUL DINI
Art by TY TEMPLETON
Cover by JORGE CORONA
Variant cover by MIKE PERKINS
Villain variant by BRIAN BOLLAND
1:25 variant cover by HAYDEN SHERMAN
$3.99 US | 32 pages | 4 of 7 | Variant $4.99 US (card stock)
The tragic story of Straightman continues in “Crack-Up,” part two! The Joker’s not-so-funny sidekick is hell-bent on revenge and has arrived at the doorstep of the dastardly doctor who mangled his mind, Hugo Strange. Meanwhile, Batman tangles with a mysterious foe who has a strange and unexpected tie to Straightman.
ON SALE 4/11/23

BATMAN: THE DOOM
THAT CAME TO GOTHAM

Batman’s rational mind and unparalleled fighting skills are put to the ultimate test when an ancient force threatens his world and everyone he holds dear in Batman: The Doom That Came To Gotham, available to purchase Digitally and on 4K Ultra HD Blu-ray Combo Pack and Blu-ray on March 28, 2023 from Warner Bros. Discovery Home Entertainment. The all-new, feature-length DC Animated Movie puts Batman up against Lovecraftian supernatural forces threatening the sheer existence of Gotham as he’s aided and confronted along the way by reimagined versions of his well-known allies and enemies, including Green Arrow, Ra’s al Ghul, Mr. Freeze, Killer Croc, Two-Face, James Gordon and more. 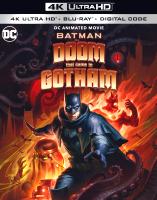 Sam Liu (The Death and Return of Superman) fills the dual role of producer and co-director of Batman: The Doom That Came To Gotham, working closely with co-director Christopher Berkeley (Young Justice) to bring to animated life the script from screenwriter Jase Ricci (Teen Titans Go! and DC Super Hero Girls: Mayhem in the Multiverse). Producers are Jim Krieg (Batman: Gotham by Gaslight) and Kimberly S. Moreau (Legion of Super-Heroes). Executive Producer is Michael Uslan. Sam Register is Executive Producer.

SYNOPSIS: Inspired by the comic book series by Mike Mignola, Richard Pace and Troy Nixey, Batman: The Doom That Came To Gotham is a 1920s-based tale that finds explorer Bruce Wayne accidentally unleashing an ancient evil, expediting his return to Gotham City after a two-decade hiatus. The logic/science-driven Batman must battle Lovecraftian supernatural forces threatening the sheer existence of Gotham, along the way being aided and confronted by reimagined versions of his well-known allies and enemies, including Green Arrow, Ra’s al Ghul, Mr. Freeze, Killer Croc, Two-Face, James Gordon and Bruce’s beloved wards. Prepare for a mystical, often terrifying Batman adventure unlike any other.

SPECIAL FEATURES INCLUDE:
–Batman: Shadows of Gotham (New Featurette) – An examination of themes of existential dread in a world drenched in gothic overtones that combine to create one of Batman’s most unique adventures.
-Audio Commentary – Filmmakers and storytellers, including producer/co-director Sam Liu and screenwriter Jase Ricci, take in all the gothic horror and intrigue of Batman: The Doom That Came to Gotham.

*Digital version not available in Canada

Gibson also created a title card in the style of Batman: The Animated Series for Batman: The Adventures Continue – Season Three #1. Watch the special video below.

For more on Batman: The Adventures Continue, check out the The World’s Finest subsite. Stay tuned for further updates and more right here!

Click here for discussion at The DC Animation Forum!