For a closer look, click on the thumbnail below. 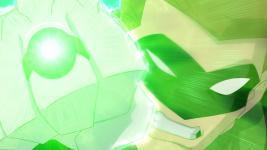 Any doubts about David Boreanazs excitement at voicing the role of Green Lantern were quickly put at ease the moment he walked through the doors of Warner Bros. Animation for his first recording session in late 2006.

Boreanaz quickly confessed that his green t-shirt was a subtle sign of his passion for the character. But, he confessed, purposely donning a pair of green socks that day should hammer home his enthusiasm at being cast as one of worlds favorite super heroes.

The star of the Fox hit series Bones and the former lead in the cult-classic Angel, Boreanaz heads an all-star voice cast as Hal Jordan and his alter ego, the Green Lantern, in Justice League: The New Frontier. The highly-anticipated DC Universe animated original movie is due from Warner Home Video on February 26.

Repeats for “The Batman” and “Legion of Super Heroes” Scheduled

The Batman is expected to end the month off with repeats of “Vertigo” on Feb. 23rd and “Attack of the Terrible Trio” on March 1st. Meanwhile, Legion of Super Heroes will finish off February with “Message In A Bottle” on the 23rd and “Cry Wolf” on March 1st.

“Batman: The Brave And The Bold” Is The Next DC Comics-Inspired Animated Series

News on this upcoming animated series should start trickling out soon. Stay tuned for further developments. 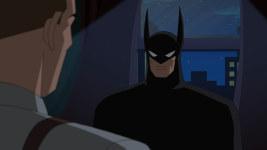 A year ago, Jeremy Sisto was starring as a private investigator with deep psychological scars in Kidnapped. This season, Sisto joined the Law & Order legacy of actors as a detective with a haunted past.

Its seem only natural that his next starring role would be as Batman. Sisto fills the vocal role of the Dark Knight in the highly-anticipated release of Justice League: The New Frontier, the second DC Universe original animated PG-13 film presented by Warner Premiere, produced by Warner Bros. Animation and distributed by Warner Home Video.