To promote the home video premiere of The Zeta Project, Warner Home Video has released a video clip from the The Zeta Project: Season One DVD release, which can be viewed by clicking on the image below. 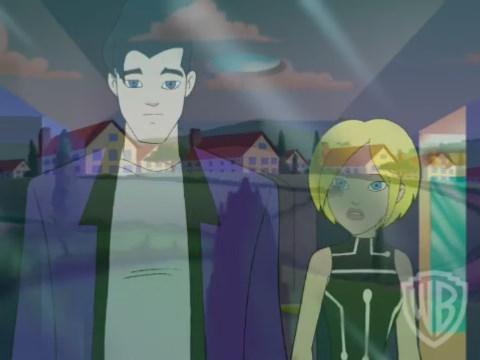 A long-awaited release by fans, the first season of the cult classic The Zeta Project animated series will finally hit DVD on Tuesday, March 17th, 2009, and Robert Goodman, series creator of The Zeta Project, caught up with The World’s Finest to participate in a new Q & A on the release.

Robert Goodman: Along with the first twelve episodes of the series, this set includes the two appearances of Zeta on Batman Beyond, “Zeta” and “Countdown,” plus a making-of mini-docu with interviews from all the people I listed last time. I was given a sneak-peek at about half of it and it’s really good. It includes plenty of concept art, storyboards, and materials like that, and all-around I’m really pleased with how it came out.

WF: Have you had a chance to look over the The Zeta Project: Season One DVD release ? Final thoughts on the release?

RG: Just this, for people to keep in mind now that they’ll have the whole series in their own collections (legally that is): Warners is releasing these discs according to aired seasons, not intended production seasons. We may have talked about this before, I don’t remember, but “Absolute Zero” was always meant to be the season one finale, not the season two opener, which was supposed to be the “Wired” two-parter. And if you look at what happens in “Absolute Zero,” spoiler alert, Zee getting to talk for the first time with Doctor Selig, Bennet finding out who Zee’s after and then coming to heads with his own boss Colonel Lemak, Lee quitting Bennet’s team — you can see how it was intended to play as a big season ender.

When Joe Kuhr and I realized the DVD releases weren’t going to be grouped the way we intended, instead of getting upset I just joked, “Ahh, it’ll be something to talk about on World’s Finest someday.” So now I’m just fulfilling my own prophecies.

WF: So, can fans start looking forward to The Zeta Project: Season Two?

RG: Last I heard, the plan was to release season two in a few months, sometime mid-’09. No clue when a date will be announced, though. We’ve already taped the added material for it, and I think it’s gonna be a lot of fun to watch. Unlike the talking-heads-style interviews in season one’s mini-docu, this one will have a panel discussion with Julie Nathanson, Liz Holzman, Joe Kuhr and me. The format was a lot more relaxed, and we got into plenty of behind-the-scenes anecdotes. This is what I was talking about before, when I said “If they use half of what was recorded.” I think people will have a good time with it.

WF: Thanks for your time, Robert!

Click here for our previous interview with Robert Goodman about the upcoming The Zeta Project: Season One DVD release.

The World’s Finest also has your first look at the menu system for the The Zeta Project: Season One DVD release. Click on the thumbnails below for a closer look.

The World’s Finest review of the The Zeta Project: Season One DVD release can also be found here.

JOIN ZETA ON THE RUN WHEN WARNER HOME VIDEO RELEASES
THE ZETA PROJECT: THE COMPLETE FIRST SEASON ON MARCH 17, 2009!

Warner Home Video (WHV) and DC Comics bring Zeta, the experientially infiltrated robot from Batman Beyond, to DVD in The Zeta Project: The Complete First Season, on March 17, 2009 for $26.99 SRP. The multi-disc compilation is a spin-off from the animated series Batman Beyond and includes bonus episodes from Batman Beyond that feature Zeta and a featurette with producer Robert Goodman.

Zeta, a robot programmed by the U.S. government to fight the country’s enemies using weaponry and a holographic self-projector, evolves to the point where he acquires both emotion and a conscience. As the value of human life became evident, he flees the government, who believes he has been reprogrammed by a foreign power. On the run, Zeta encounters Rosalie “Ro” Rowan, a street orphan who is wanted by the law herself. Join Zeta and Ro in The Zeta Project: The Complete First Season as they set out across America to find both Ro’s parents, and Zeta’s creator who can prove the robot is acting of his own free will.

The Zeta Project: The Complete First Season will be a multi-disc DVD with approximately 260 minutes of twelve 22-minutes episodes including:

Originally broadcast on Kids’ WB, The Zeta Project was a two season adventure that left fans in suspense with no conclusion ever written for the series. As an exciting extra The Zeta Project: The Complete First Season will feature:

Featurette: Finding Freedom – (15-20 minutes approx) With no conclusion ever written for the series, fans have been left to wonder what happened to Zeta and Ro. In a roundtable discussion, the cast speculates on various theories of where the show would have gone while producer/show runner Robert Goodman and his team give the fans the definitive answers.

“We are thrilled to be extending the Batman franchise with The Zeta Project: The Complete First Season” said Amit Desai, WHV Vice President of Family, Animation & Sports Marketing. “The twelve episodes are filled with high energy and the bonus featurette with Robert Goodman is a real treat for fans that have been waiting in anticipation for an ending.”

DC Comics, a Warner Bros. Entertainment Company, is the largest English-language publisher of comics in the world and home to such iconic characters as Superman, Batman, Wonder Woman and the Sandman. These DC Super Heroes and others have starred in comic books, movies, television series (both animated and live-action) and cyberspace, thrilling audiences of all ages for generations. DC Comics’ Web site is located at www.dccomics.com.

The Zeta Project and all related characters and elements are trademarks of and DC Comics.

A long-awaited release by fans, the first season of the cult classic The Zeta Project animated series will finally hit DVD on March 17th, 2009, and Robert Goodman, series creator of The Zeta Project, is excited to finally see this series released to the digital format.

“I’m psyched beyond words that The Zeta Project is coming out on DVD,” says Goodman, “And it was a blast doing the interviews for the added material.”

“Julie Nathanson (Ro), Liz Holzman (producer), Alan Burnett (supervising producer), Haven Alexander (associate producer), Rich Fogel (story editor), Joe Kuhr (staff writer), Rozalina Tchouchev (background painter) and I all got to contribute,” he continues, adding that he hopes he’s not forgetting anyone. “We all had a great time seeing each other and taking a trip down memory lane.

Goodman adds that he has high hopes for this release and wanted to be sure the release contained great bonus content.

“I’m hoping some good sales numbers will inspire Warner Bros. to let us resume telling Zee and Ro’s stories,” says Goodman, “Be it in series or maybe finishing the journey in a long-form straight-to-DVD or two.”

“Either way, thanks to everyone for still watching,” Goodman adds, “And I hope you all enjoy The Zeta Project on DVD!”

On a related note, The World’s Finest is holding a special poll to determine the best episode of “Batman Beyond,” a series now celebrating its 10th anniversary. To participate in this poll, please click here.

To view the back cover art, click on the thumbnails below.