The DTV That Could Have Been – “The Batman Versus Hush”

Countless projects are shut down at various stages of production. Whether it’s just after the initial idea pitch or early into design work, etc., some productions just aren’t able to make it for one reason or another. This is a brief look at The Batman Versus Hush, a Direct-To-Video feature that could have been.

It’s no secret that Jeff Matsuda, one of the lead creators behind The Batman, is friends with comic book scribe Jeph Loeb. It’s also no secret that Matsuda has talked to Loeb on more than one occasion about introducing the character Hush into The Batman mythos. Who’s Hush? Hush was a character Loeb introduced in the popular Batman comic book storyline “Hush” in the early 2000s. After the success of the The Batman Versus Dracula DTV, it seemed like another The Batman DTV was inevitable. And, actually, there was a second The Batman DTV in early pitching stages, a DTV which would have focused on Hush. Believing in the tremendous wealth of material from Batman’s comic roots, Matsuda thought a DTV focusing on Hush would be something the fans could really enjoy. 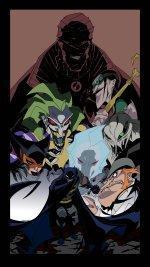 Thanks to Jeff Matsuda for the image and additional information.

No New Episodes of “The Batman” and “Legion” In January 2008

New episodes for both series will likely begin in February 2008, but nothing is confirmed at this time.

Batman: Gotham Knight is slated for a June 2008 video release.

Batman and Mr. Freeze: Sub Zero is a breathtaking animated adventure that explodes into action when the villainous Mr. Freeze kidnaps Batgirl. Now, racing the clock, Batman and Robin face off against Mr. Freeze in the iciest showdown of the century. Batman Mask of Phantasm was called one of the most imaginative films of the past year by Chuck Rich (Westwood One). Only here will you discover all-new revelations about Batmans past, his archrival the Joker and the most grueling battle of Batmans life the choice between his love of a beautiful woman and his vow to be the defender of right.