Click on the image below to check out the interview! Please note the interview contains exclusive images that are not to be removed without permission. 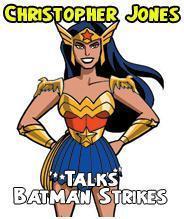 The Batman Strikes #50, the final issue of the series, will hit shelves October 1st, 2008. To discuss the interview, and see further images and responses to fan questions from Jones, click on the link below. Stay tuned for further updates.

The feature, comprised of six different short stories, is scheduled to air Saturday, October 4th, 2008 at 9pm (ET). The official description of the feature is seen below.

“Batman: The Animated Series” Mini-Marathon On Toon Disney This Weekend

The mini-marathon is scheduled for 8am (ET) on Saturday, September 20th and will feature the episodes, “Tyger, Tyger,” “Moon of the Wolf,” and “Day of the Samurai.” According to the programming schedule, Batman: The Animated Series currently does not have a regular timeslot on the programming block.

J. Torres, popular among the fan community for his work on the late comic series Teen Titans Go!, became the regular writer on Legion of Super Heroes In The 31st Century during the title’s first year. Much like his work on Teen Titans Go!, Torres has made the comic an integral part of the series’ continuity. Torres will be wrapping his run on the book with issue #19, the end of the current three-part “Flight Ring” storyline, and the series itself will be ending with issue #20.

The World’s Finest: Your current arc on Legion of Super Heroes In The 31st Century is a three-issue storyline called “Flight Ring.” What themes will you be exploring as your wrap up your run with these three issues?

J. Torres: Trust, leadership, team work. The types of things that hold the Legion together.

WF: Looking back at the series, do you have any particular favorite issue or moment that stands out for you?

JT: I’d say it’s a toss up between #6 (“Attack of the Green Lantern Corps”) and #12 (“Back in Metropolis”). #6 because it not only had a lot of Legionnaires in it, but the Green Lantern Corps, and Starro to boot. Plus, we introduced Jordana Gardner and Gen’Ma the Panda, both of which got terrific fan response. And #12 because I got to play with Lois and Clark and introduce Lex Luthor to the series.

WF: Fans appreciated your faithful run on Teen Titans Go! because it paid tribute to the characters and stayed faithful to the animated series. On Legion of Super Heroes In The 31st Century, your run has the series has been doing the same. With the series coming to an end, is there anything you wish you could’ve done on the series?

JT: Well, I would’ve liked to write another two dozen issues or so! *Smiles*

WF: Did you have any specific plans to follow-up on the many plot threads left dangling from the end of the second season of Legion of Super Heroes?

JT: We had lots of plans! We wanted to bring Alexis Luthor, the LSV, and some more Phantom Zone escapees in from the animated series. We wanted to do more with Garth and his siblings. Also, Phantom Girl and her mother. Oh, and Cosmic Boy and RJ Brande. Most importantly, we wanted to show where Brainy went after the end of season two and how he made his way back to the Legion, but that was contingent on what happened with the show. Unfortunately, we never got the chance. While we were waiting to hear the fate of the show, we basically just “skipped ahead” and started writing stories as if we were in a third season, and that’s why #17-19 have Brainy back on the team and back to his old self more or less.

WF: Fans sometime turn to the comic book spin-offs to see some of their favorite characters pair up in a romantic context. Legion of Super Heroes had a unique relationship that many fans were hoping to see expanded upon – Brainiac 5 and Superman. Any thoughts on why fans took to that pairing, could have it been explored in any further context, or could it have been done realistically at all? Do you have any thoughts on that relationship, or one you were looking to explore?

JT: I definitely wanted to explore Brainy’s “man crush” on Superman more. I also wanted to add Supergirl into the mix at one point and do some fun stuff with that “love triangle.” I don’t know if Brainy’s love for Superman was of the romantic type, but then again, he has a 12th level intellect and his concept of platonic love versus romantic love is probably more complex than we could understand. I don’t think we could accurately define it with our 21st century labels, nor would I necessarily want to in the context of this comic book.

WF: Any last thoughts on your run on the series as you wrap up your run on Legion of Super Heroes In The 31st Century? Any final comments?

JT: It was a blast while it lasted! I want to thank all the readers out there who supported this series, especially the bloggers and fansite/forum adminstrators/moderators like yourself for trying to give us some exposure and get the word out. I hope you continue to follow the careers and other work of the creators who contributed to the book.

WF: Now, since I’m a fan of the The Family Dynamic DC Comic series, this question is more of a shameless shout-out to the series. Do you and Tim Levins have plans for the characters beyond the current mini-series? What was your reaction when DC Comics announced the series would be a three-issue mini-series instead of a six-issue series? What can we expect from the series in the coming months?

JT: Naturally, we were disappointed to hear about the low sales. But we’re trying not to cry over spilled milk or play the blame game and just move forward as best we can with this. The reaction to The Family Dynamic thus far has been very encouraging, so we’re looking into trying to continue the series somehow. I can’t really say anything on that just yet, but of course our first attempt is to keep it at DC somehow. Hopefully, I’ll have some kind of good news to report before long. In the meantime, please keep an eye on my blog for more information, previews, and other goodies!

WF: Care to fill us in on what projects you’re currently working on and your plans for the future? Where can we expect to see you next?

JT: I recently turned in the script for a graphic novel called Lola: A Ghost Story, which will be published by Oni Press early next year. I’m currently writing another graphic novel for them called Dead Goombas, which is a comedy about gangsters and zombies. Other than that, I’m waiting for the phone to ring. I’m hoping DC will call soon with more work for me. I was also asked by another company to pitch for a couple of movie/cartoon-related properties that I’m pretty excited about, so I really hope that at least one of those pans out. In the meantime, as of this writing, I’ve still got one issue of the Legion of Super Heroes In The 31st Century book to come, and two issues of The Family Dynamic on their way out – so please check them out!

WF: Thanks for stopping by, J.!

Legion of Super Heroes In The 31st Century #18 is currently on stands now, and click here to check out J. Torres’ blog!

Stay tuned for further updates, including an interview with Christopher Jones from The Batman Strikes!