In support of the summer 2022 theatrical release DC League of Super-Pets from Warner Bros. Pictures, Warner Bros. Home Entertainment has announced the Krypto The Superdog: The Complete Series DVD collection, hitting retail shelves on August 2, 2022. The release collects the 2005-2006 cartoon which follows Superman’s pup doing good on Earth. Continue below for Krypto The Superdog: The Complete Series package art and press details:

KRYPTO THE SUPERDOG:
THE COMPLETE SERIES

In 2005, a new breed of Super Hero claimed its place of prominence among Saturday morning cartoons with the premiere of Krypto The Superdog: The Complete Series. On August 2, 2022, Warner Bros. Home Entertainment brings the acclaimed complete animated series to DVD (USA $44.98 SRP; Canada $49.99 SRP).

Created by Chris Mitchell, Krypto The Superdog: The Complete Series follows the adventures of the title character – Superman’s beloved pooch – who also acquires the powers afforded his original Earthbound master. Alongside allies like Ace The Bat-Hound and Streaky the Supercat, Krypto fights the forces of evil, which include the animal companions of Lex Luthor and Catwoman.

Scott Jeralds (Static Shock) and Alan Burnett (Batman: The Animated Series) served as supervising producers, and Linda Steiner (Pound Puppies) and Paul Dini (Superman: The Animated Series) were producers on the series. Sander Schwartz was the executive producer. Burnett and Dini also served as story editors, while Jeralds directed all 39 episodes of Krypto the Superdog.

ABOUT DC
DC creates iconic characters, enduring stories, and immersive experiences that inspire and entertain audiences of every generation around the world and is one of the world’s largest publishers of comics and graphic novels. As a creative division, DC is charged with strategically integrating its stories and characters across film, television, consumer products, home entertainment, interactive games, DC UNIVERSE INFINITE digital subscription service and community engagement portal. For more information visit dccomics.com and dcuniverseinfinite.com.

KRYPTO and all related characters and elements are TM and © DC. © 2022 Warner Bros. Entertainment Inc.

The Krypto The Superdog: The Complete Series DVD collection will be available for purchase starting August 2, 2022 from Warner Bros. Home Entertainment. What the show’s opening titles in the video above. Stay tuned for further updates right here at The World’s Finest. Click the link below to discuss this news.

Update: Please note this collection was delayed to Sept. 27, 2022 for undisclosed reasons. 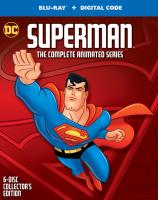 Warner Bros. Home Entertainment and DC are celebrating the 25th anniversary of Superman: The Animated Series with a fully remastered Blu-rayTM box set. Superman: The Complete Animated Series, which includes several hours of bonus features headlined by an all-new documentary detailing the creation of one of the most beloved animated Super Hero cartoons in history, will be available starting October 12, 2021.

The launch of Batman: The Adventures Continue – Season Two, along with collections for Justice League Unlimited and Superman Adventures are slated to hit shelves come Summer 2021, as revealed in DC Comics’ June 2021 comic solicitations. The Superman Adventures collection features a series of stories spotlighting Supergirl, and the Justice League Unlimited focuses on the female members of the League. Continue below for details, artwork and release details.

Gotham City is changing. After Mayor Hill is killed by a mysterious assailant, Batman finds himself tracking down an ancient order that’s long been buried under the streets of Gotham: the Court of Owls. But what does this group have to gain from the death of Mayor Hill, and how can Deadman help the Dark Knight?

Supergirl takes the spotlight in this collection of adventures that prove she is much more than a sidekick! Discover the events that prepare Supergirl to face her past fears and embrace her future. Throughout this collection, witness Supergirl team up with Superman and the Justice League to confront treacherous encounters with some of DC’s most notorious villains, like General Zod, Lex Luthor, and Darkseid. Join the adventure as Kara gets accustomed to life on Earth and fulfills her desire to help the world. Collects Superman Adventures #21, #39, #52, and Justice League Unlimited #7.

For more Batman: The Adventures Continue details and content, please check out the comic title’s dedicated mini-site here at The World’s Finest. Additionally, further Superman: The Animated Series and Justice League Unlimited details can be found on their respective subsites, here and here. Stay tuned for more updates and click the link below to discuss this news!

HBO Max has announced that Superman: The Animated Series will be joining the streaming service starting March 17, 2021, and it will be available for the first time anywhere in high-definition. HBO Max is an American-based subscription video on demand streaming service from AT&T’s Warner Media, which also owns publisher DC Comics and its characters. Additionally, Warner Media confirms Superman: The Animated Series will also be available soon in high-definition in different media formats, with details and specifics to be announced soon.

Superman: The Animated Series
As the planet Krypton is destroyed, its leader, Jor-El, secures his infant son, Kal-El, in a rocket that will transport him to Earth. There, as Clark Kent, he discovers the truth about his interplanetary heritage and assumes the identity of Superman in the city of Metropolis.

DC Comics is releasing a new Superman Adventures trade paperback collection in March 2021, as shown in DC Comics’ February 2021 comic solicitations. The collection, titled Superman Adventures: Lex Luthor, Man of Metropolis, includes an assortment of issues from the classic Superman: The Animated Series-inspired comic series focused on the Man of Steel’s brilliant arch foe. The title is part of the digest-sized DC Comics graphic novels line aimed at all ages readers. Continue below for artwork and release details.

As long as Superman has flown over the skies of Metropolis, one man has always sought to take the brave hero down: Lex Luthor! But why does Lex hate Superman so much? See just how devious Superman’s greatest foe is as experiments with Kryptonite run amok. And Lex isn’t just Superman’s enemy here on Earth—their rivalry will take them to Apokolips and back, as seen in this collection of stories set in the world of the Superman: The Animated Series! Collects Superman Adventures #27, #54-55, and #65-66.

Please note that, unlike last month, there is no new issue of Batman: The Adventures Continue listed.

Check out the Superman: The Animated Series subsite here at The World’s Finest for more on Superman Adventures and the classic animated series. Superman Adventures: Lex Luthor, Man of Metropolis hits comic book shelves and most book retailers on March 2nd, 2021. Stay tuned for further updates, and be sure to click the link below to discuss this news!