Written by ALAN BURNETT and PAUL DINI
Art by TY TEMPLETON
Cover by JORGE CORONA
Variant cover by MIKE PERKINS
Villain variant by BRIAN BOLLAND
1:25 variant cover by HAYDEN SHERMAN
$3.99 US | 32 pages | 4 of 7 | Variant $4.99 US (card stock)
The tragic story of Straightman continues in “Crack-Up,” part two! The Joker’s not-so-funny sidekick is hell-bent on revenge and has arrived at the doorstep of the dastardly doctor who mangled his mind, Hugo Strange. Meanwhile, Batman tangles with a mysterious foe who has a strange and unexpected tie to Straightman.
ON SALE 4/11/23 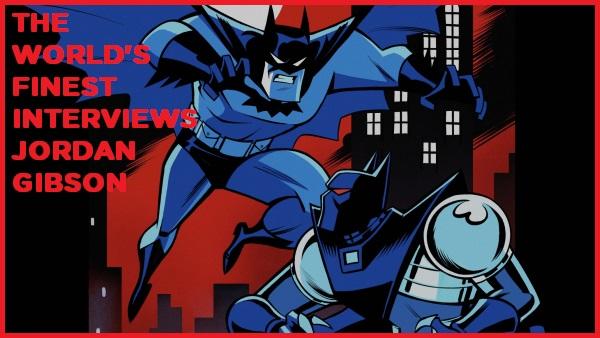 Gibson also created a title card in the style of Batman: The Animated Series for Batman: The Adventures Continue – Season Three #1. Watch the special video below.

For more on Batman: The Adventures Continue, check out the The World’s Finest subsite. Stay tuned for further updates and more right here!

Written by ALAN BURNETT and PAUL DINI
Art by TY TEMPLETON
Cover by BALDEMAR RIVAS
Variant cover by MATTEO SCALERA
Villain variant cover by SWEENEY BOO
1:25 title card variant cover by HAYDEN SHERMAN
$3.99 US | 32 pages | 3 of 7 | Variant $4.99 US (card stock)
The Joker’s right-hand man, Straightman, isn’t quite feeling himself lately. He keeps experiencing moments…flashbacks…of a life he doesn’t remember. After a recent run-in with the Clown Prince and his stoic enforcer, Batman starts to unravel the man’s past, but it lands him smack dab in the crosshairs of Amanda Waller and Task Force X!
ON SALE 3/14/23

Written by TEE FRANKLIN
Art by SHAE BEAGLE
Cover by YOSHI YOSHITANI
Variant cover by DAN HIPP
1:25 variant cover by DOMINIKE “DOMO” STANTON
$3.99 US | 32 pages | 6 of 6 | Variant $4.99 US (card stock)
Harley and Ivy’s relationship has been stress-tested in nearly every way over the course of this series, and now, as their adventure comes to a close, we are left with one question: Is their love strong enough to withstand these trials and tribulations? Check out this fanshmabulous finale to find out!
ON SALE 3/21/23

Written by ALAN BURNETT and PAUL DINI
Art by KEVIN ALTIERI
Cover by NICK DERINGTON
Variant cover by DANIEL WARREN JOHNSON
Villain variant cover by BEN TEMPLESMITH
1:25 variant cover by HAYDEN SHERMAN
$3.99 US | 32 pages | 2 of 7 | Variant $4.99 US (card stock)
Bruce Wayne and Harley Quinn don’t have much in common, except for Cassie Kendall. Beautiful and whip-smart, she nearly changed the course of Bruce’s life when she was his high school sweetheart, and shortly thereafter became Harley’s college fling. Now, after a long time away from Gotham, Cassie has returned and immediately has her sights set back on Bruce. But when Harley learns of Cassie’s return, she is all too happy (and manic, and unpredictable) to reconnect with her old college girlfriend. As Bruce’s and Harley’s paths cross, it becomes clear that all is not as it seems with Cassie Kendall…
ON SALE 2/14/23

Written by TEE FRANKLIN
Art by SHAE BEAGLE
Cover by YOSHI YOSHITANI
Variant cover by DAN HIPP
1:25 variant cover by CHAD HARDIN
$3.99 US | 32 pages | 5 of 6 | Variant $4.99 US (card stock)
The Bat-Fam, Black Mask, and Lady Marabunta finally face off, while Ivy, Knockout, Bella, Livewire, and Nightfall break Porcelain out of Blackgate Penitentiary! Meanwhile, Harley visits an incarcerated Bruce Wayne for an unscheduled therapy-and-venting session. How much longer will Harlivy keep their secrets from each other before it’s too late?
ON SALE 2/21/23

BATMAN: THE DOOM THAT CAME TO GOTHAM (NEW EDITION)

Written by MIKE MIGNOLA and RICHARD PACE
Art by TROY NIXEY and DENNIS JANKE
Cover by MIKE MIGNOLA
$16.99 US | 160 pages | 6 5/8″ x 10 3/16″ | Softcover
ISBN: 978-1-77952-149-1
Offered again! Gotham City, 1928. Twenty years have passed since a madman slew the parents of young Bruce Wayne, heir to one of the oldest fortunes in Gotham City. Then, Bruce fled the carnage of Gotham and the unearthly voice warning him to prepare for the world to come. Now Bruce Wayne has returned. And hell has followed…A terrible thing from beyond space and time has awakened. The Lurker on the Threshold has called its faithful servants—immortal sorcerers, reptile men, beings of eldritch cold and fungal horror—to feed our world into its gaping maw. Join acclaimed comics talents Mike Mignola (Hellboy), Richard Pace (Robert E. Howard’s Savage Sword), and Troy Nixey (Harley Quinn) as they present Batman: The Doom That Came to Gotham, a terrifying reimagining of the greatest heroes and villains in the Batman mythos.Collects Batman: The Doom That Came to Gotham #1-3.
ON SALE 4/4/23


Fans of Static Shock will want to check out Milestone 30th Anniversary Special #1 when it hits shelves in February 2023. The one-shot special will feature stories and artwork inspired by the fan-favorite animated series. Additionally, a new printing of the Batman: The Doom That Came To Gotham trade paperback collection is being released to tie into the Spring 2023 release of the DC Animated Movie animated adaptation of the same name. Stay tuned for further details on Batman: The Doom That Came To Gotham here in the coming months.

Written by TEE FRANKLIN
Art by SHAE BEAGLE
Cover by YOSHI YOSHITANI
Variant cover by DAN HIPP
1:25 variant cover by RENAE DE LIZ
$3.99 US | 32 pages | 4 of 6 | Variant $4.99 US (card stock)
Harley Quinn and Poison Ivy, a.k.a. Harlivy, a.k.a. the DCU’s most favoritest couple.They’re inseparable, right? Right? Well, maybe not. While Ivy focuses onprepping for her new job with the Legion of Doom and Harley dives mallet-firstinto her role as a member of the Bat-Family, the DCU’s most favoritest couple find themselves stretched thin. But are they at their breaking point?
ON SALE 1/17/23