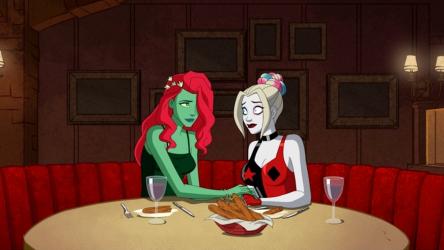 The final issue of the Young Justice: Targets mini-series, along with the latest issue of the Harley Quinn: Legion of Bats mini-series, are both slated to hit comic store shelves this December 2022 from DC Comics. Both comic titles carry on plot threads established in their respective animated series, including the status-quo changing season three finale of Harley Quinn. Continue below for artwork and further details, all provided as part of the December 2022 solicitations from DC Comics.

Written by GREG WEISMAN
Art and cover by CHRISTOPHER JONES
Variant cover by MEGHAN HETRICK
$3.99 US | 32 pages | 6 of 6 | Variant $4.99 US (card stock)
You’ve witnessed teams across the globe band together in the name of a shared goal—through twists and turns, friendships and betrayals, they have held steady in their goal to rescue Queen Perdita from the foul conspiracy she has been ensnared in. And now, in our final issue, we ask the question…will they succeed? Find out in this dramatic, action-packed, and heart-wrenching finale!
ON SALE 12/27/22

Written by TEE FRANKLIN
Art by JON MIKEL
Cover by YOSHI YOSHITANI
Variant cover by DAN HIPP
1:25 variant cover by REILLY BROWN
$3.99 US | 32 pages | 3 of 6 | Variant $4.99 US (card stock)
Harley Quinn and Poison Ivy, a.k.a. Harlivy, a.k.a. the DCU’s most favoritest couple.They’re inseparable, right? Right? Well, maybe not. While Ivy focuses onprepping for her new job with the Legion of Doom and Harley dives mallet-firstinto her role as a member of the Bat-Family, the DCU’s most favoritest couple find themselves stretched thin. But are they at their breaking point?
ON SALE 12/20/22


In related news, Young Justice producer Greg Weisman is launching a new ongoing comic book series this December 2022 based on his acclaimed 1990s Gargoyles animated series. Coming from Dynamite Comics, the series will feature new Gargoyles stories that are fully in continuity with the acclaimed cartoon. Details are below.

Written by GREG WEISMAN
Art by GEORGE KAMBADAIS
Cover by DAVID NAKAYAMA
Price: $3.99 US | 32 pages
One thousand years ago, superstition and the sword ruled. It was a time of darkness. It was a world of fear. It was The Age of Gargoyles. Stone by day, Warriors by night, they were betrayed by the humans they had sworn to protect…frozen in stone by a magic spell for a thousand years. Now, here in Manhattan, the spell is broken, and they live again! They are Defenders of the Night! They are Gargoyles! Series creator Greg Weisman and illustrator George Kambadais reintroduce the Manhattan Clan, a family of Gargoyles at full strength, though modern New York City is full of attractions and distractions, and each member of the clan has begun to go their own way. But their bonds will be tested, when nefarious factions from all across the world attempt to steal that rarest, most precious of possessions…an unhatched Gargoyle egg!
ON SALE 12/07/22


Click here for further information on the upcoming Gargoyles comic series, including a look at interior artwork, variant covers, and more, and click here for discussion.

DC Comics has released details on upcoming issues of the Young Justice: Targets mini-series and the Harley Quinn: Legion of Bats mini-series slated to hit comic store shelves this November 2022. Both comic titles carry on plot threads established in their respective animated series. Continue below for artwork and further details, all provided as part of the November 2022 solicitations from DC Comics.

Written by GREG WEISMAN
Art and cover by CHRISTOPHER JONES
Card stock variant cover by MEGHAN HETRICK
$3.99 US | 32 pages | 5 of 6 | Variant $4.99 US (card stock)
Just as it seemed that Superboy was about to make some headway, enter a Kryptonite-laced Metallo! Will the team be able to finally achieve their goal and rescue Perdita, or will the Lexcorp robotics factory be their final resting place? Check out this penultimate chapter to find out!
ON SALE 11/22/22

Written by TEE FRANKLIN
Art by SHAE BEAGLE
Cover by YOSHI YOSHITANI
Variant cover by DAN HIPP
1:25 variant cover by JON SOMMARIVA
$3.99 US | 32 pages | 2 of 6 | Variant $4.99 US (card stock)
While out shopping for new outfits at the New Gotham Mall, Harley and Ivy stumble across a possible recruit…but are they recruiting for good or for bad? And what loser(s) would dare to show up and ruin their shopping extravaganza? A very pissed-off Clock King and a butthurt Riddler. Meanwhile, Nightwing and Batgirl follow up on a lead that sends Harley reeling…as many villains’ plans come to light. Everyone is out to tear our girls apart!
ON SALE 11/15/22

The launch of a new animated Harley Quinn limited series and the fourth issue of the Young Justice: Targets mini-series are both set for an October 2022 release from DC Comics. Please note the description for Harley Quinn: The Animated Series – Legion of Bats! appear to contain spoilers for the forthcoming second season of the Harley Quinn animated series, debuting July 28, 2022 on the HBO Max streaming service. Continue below for artwork and further details, all provided by DC Comics as part of their October 2022 solicitations.

Written by GREG WEISMAN
Art and cover by CHRISTOPHER JONES
Variant cover by MEGHAN HETRICK
Black Adam variant cover by PAUL RENAUD
$3.99 US | 32 pages | 4 of 6 | Variant $4.99 US (card stock)
The search for Queen Perdita continues and the conspiracy behind her abduction deepens as Lex Luthor’s involvement becomes apparent! Now the Outsiders and Gorilla Squad head to a Lexcorp robotics factory in Bialya to investigate further, and what they find will rock them to their core!
ON SALE 10/25/22

Written by TEE FRANKLIN
Art by SHAE BEAGLE
Cover by YOSHI YOSHITANI
Variant cover by DAN HIPP
1:25 variant cover by LOGAN FAERBER
1:50 variant cover by JESS TAYLOR
$3.99 US | 32 pages | 1 of 6 | Variant $4.99 US (card stock)
When last we checked in with Harley Quinn, she ate, she banged, and she killed—but now it’s time for something a little different. Fresh out of the events of Harley Quinn: The Animated Series season 3, Harley has found herself a part of a highly unlikely team—the Bat-Family! Meanwhile, Poison Ivy has found herself prepping for her new job—leader of the Legion of Doom! But while Harley and Ivy adjust to their respective new roles, a ghost from Ivy’s past enters the fray and threatens the relationship between everyone’s favorite clown/plant couple!
ON SALE 10/18/22

The third issue of the Young Justice: Targets mini-series and a Harley Quinn 30th anniversary special comic are both set for a September 2022 release from DC Comics. The Harley Quinn special is being released nearly thirty years to the day of her first ever appearance in the Batman: The Animated Series episode “Joker’s Favor.” Continue below for artwork and further details, all provided by DC Comics as part of their September 2022 solicitations.

Written by GREG WEISMAN
Art and cover by CHRISTOPHER JONES
Variant cover by MEGHAN HETRICK
Hispanic Heritage Month variant cover by ADRIAN GUTIERREZ
Queen Perdita has been rescued! Or has she? Beast Boy has his doubts, and soon his suspicions turn terrifyingly real. Nightwing and Robin, working across the globe from one another, come upon information that leads them to uncover the identity of the villain who’s been pulling the strings behind this kidnapping all along! Plus, take a trip into the past with another action-packed backup, starring Green Arrow!
$3.99 US | 32 pages | 3 of 6 | Variant $4.99 US (card stock)
ON SALE 9/27/22

“Last chance, Quinn.
Don’t make me do this.”
—Amanda Waller

“Wait…you’re not
going back to…”
—Red Tool


More details on Young Justice: Targets can be found here and check out the The World’s Finest Young Justice subsite for more content! Stay tuned right here for further Young Justice coverage and updates! Discuss this news by clicking the link below.