Warner Bros. Animation has provided The World’s Finest with episode details and images for the Young Justice: Outsiders episode set to debut July 23, 2019 on the DC Universe streaming service. Young Justice: Outsiders finds our heroes still dealing with the events of Young Justice: Invasion while facing the new threat of metahuman teen trafficking and the intergalactic arms race for control of these super-powered youths. New episodes of the series debuts every Tuesday on DC Universe. Continue below for episode details and images. 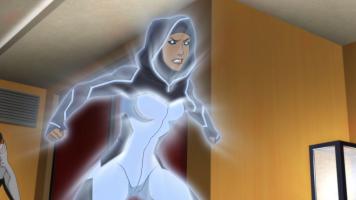 Click on the above thumbnail to view more images from the episode!
Young Justice: Outsiders “First Impression”
Original Airdate – July 23, 2019
The Outsiders face Lex Luthor’s machinations. But Lex isn’t the only one trying to manipulate them!

Episodes will appear on the streaming service at 12pmET/8amPT. Following the early-July mid-season premiere of three new episodes, DC Universe will roll out one new Young Justice: Outsiders episode a week until the season finale in August 2019, which again will consist of a three episode drop. The third season of Young Justice features 26 episodes in total.

It’s back to school — and back to saving the day — for the DC Super Hero Girls in season 3. Get a peek at what’s ahead in the animated series with this preview. Featuring lots of action-packed clips, it’s got some of the villains the DC Super Hero Girls will face in the upcoming episodes, along with some awesome teamwork moments. Just like Frost says, “Expect the unexpected!

At Super Hero High, iconic super heroes of the DC Comics universe, like Wonder Woman, Supergirl, Batgirl, Harley Quinn, Bumblebee, Poison Ivy, and Katana navigate all the twists and turns of high school. United by friendship, the DC Super Hero Girls empower kids to shine with confidence and courage, especially while they combat those overwhelming, exciting, and awesomely awkward moments of growing up.

A special run of the final thirteen episodes of Beware The Batman kicks off in January 2015 on Teletoon, leading up to the new-to-the-network debut of the final three episodes of the acclaimed animated series. Beware The Batman rejoins to the network’s SuperFan Friday programming block starting Friday, January 2nd, 2015 at 8:30pm (ET/.PT), and is expected to air uninterrupted straight to the March 2015 network premiere of the series finale.

“Darkness” airs Friday, January 2nd, 2015 at 8:30pm (ET/PT) on Teletoon
With Batman a prisoner – and the League of Assassins now in control of Gotham – it’s up to a small band of heroes to save the city.

Beware The Batman
“Reckoning” airs Friday, January 9th, 2015 at 8:30pm (ET/PT) on Teletoon
Ra’s unleashes some of Batman’s greatest enemies from Blackgate to keep him occupied, while Ra’s turns his attentions on Katana and Alfred.

Beware The Batman
“Monsters” airs Friday, January 23rd, 2015 at 8:30pm (ET/PT) on Teletoon
There’s a new hero in Old Gotham. Metamorpho’s back and he’s using his powers to protect the citizens of Gotham from high tech criminals.

Cartoon Network has provided details for new episodes of the Teen Titans Go! animated series slated to air on the network for January 2015. Teen Titans Go!, a half-hour comedy/adventure series comprised of two back-to-back 15-minute episodes, follows the hilarious antics of the teenage superhero team as they deal with what happens between major battles. The DC Comics-inspired cartoon airs Thursdays at 6:00 (ET/PT) on Cartoon Network, with regular re-airings throughout the week on the animated-themed channel. Continue below for further details. 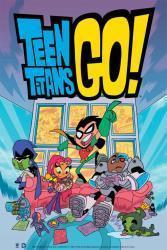 Teen Titans Go!
Thursday, January 15th, 2015 at 6:00pm (ET/PT)
“Hot Garbage” – When the Titans try to get Beast Boy to clean his dirty room, they discover that there’s more to garbage than just trash.

Teen Titans Go!
Thursday, January 22nd, 2015 at 6:00pm (ET/PT)
“Robin Backwards” – Nibor, the Bizzaro World’s Robin, arrives in Jump City, and the Titans decide they should probably keep an eye on him.

Teen Titans Go!
Thursday, January 29th, 2015 at 6:00pm (ET/PT)
“Crazy Day” – It’s Crazy Day again and Raven must do her best to avoid being driven completely crazy by the other Titans.

Teen Titans Go! airs Thursdays at 6:00pm (ET/PT) on Cartoon Network, with rebroadcasts airing throughout the week on Cartoon Network. Stay tuned for further updates and more right here at The World’s Finest. Please click the link below for more discussion.

A single new-to-the-network episode of Beware The Batman will air on the Canadian network episode Teletoon during the month of December 2014, along with a special rerun, before going on sabbatical due to special holiday programming. The acclaimed animated series airs at Fridays at 8:30pm (ET/PT) as part of Teletoon’s SuperFan Friday programming block, featured alongside Ultimate Spider-Man: Web Warriors, Marvel’s Avengers Assemble, and other animated fare.

Beware the Batman spotlights the Dark Knight as he faces the twisted machinations of Gotham City’s criminal underworld with the help of ex-secret agent Alfred and lethal swordstress Katana. Schedule details are available below.

Beware The Batman
“Choices” airs Friday, December 5th, 2014 at 8:30pm (ET/PT) on Teletoon
When Batman and Katana are ambushed in the Gotham subway by Killer Croc, it’s up to Barbara Gordon to save them. Only one problem: Barbara’s on a date.

Beware The Batman
“Doppelganger” airs Friday, December 12th, 2014 at 8:30pm (ET/PT) on Teletoon
Batman and Katana encounter a strange Man-Bat creature, who is the experimental result of Pyg and Toad’s animal army of mutated humans.

Please note that Beware The Batman will be pre-empted for the remainder of the month due to special holiday programming. The acclaimed animated series will return in January 2015 to air its final three episodes.