Teletoon Releases April 2009 Schedule For “Batman: The Brave And The Bold” Episodes

Below are official descriptions and airdates for episodes of the Batman: The Brave and The Bold animated series slated to air in April 2009 on the Canadian network Teletoon. Please note the information listed below is provided by Teletoon.

Sunday, April 5th, 2009 – “013 Game Over For Owlman!”
On Earth, Owlman has been perpetrating crimes disguised as Batman and assembled all the villains to join him. Batman returns and teams with Joker to take Owlman down while avoiding all the heroes who are after him.

Sunday, April 26th, 2009 – “003 Evil Under the Sea!”
Batman aids Aquaman as Ocean Master and Black Manta team up to assassinate him.

A representative for Warner Bros. Animation has passed along a flyer describing the upcoming Warner Bos. Animation event. Click on the image below for a closer look at the flyer, presented as a PDF document. 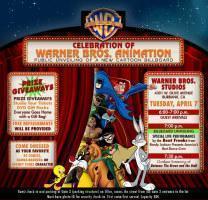 The special “Animation Celebration,” held by Warner Bros. Animation, will take place on Tuesday, April 7th, 2009, starting at 6:00pm at the Warner Bros. Studios in Burbank, California. The celebration will also include the reveal of the new Warner Bros. Animation banner and will feature live entertainment, prizes, and appearances by Glen Murakami, Bruce Timm, and James Tucker. A special outdoor showing of Batman: The Brave and The Bold will also be held.

Below are official descriptions and airdates for the episodes of Justice League slated for April 2009 on Teletoon. The series will make its Teletoon debut at 8pm (ET) on April 17th, 2009 as part of the new “Superfan Fridays” programming block. Justice League will join Iron Man: Armored Adventures, Batman: The Brave and The Bold, The Spectacular Spider-Man, and Wolverine and The X-Men for the Friday-night block. The information listed below is provided by the Canadian animation network Teletoon.

Friday, April 17th, 2009 – “001 Secret Origins, Part One”
J’onn Jonzz, the Martian Manhunter, comes to Earth to warn of an impending alien invasion. With the help of Superman and Batman, he gathers the world’s greatest heroes to fend off the seemingly unstoppable invading armada.

Friday, April 24th, 2009 – “002 Secret Origins, Part Two”
J’onn Jonzz, the Martian Manhunter, comes to Earth to warn of an impending alien invasion. With the help of Superman and Batman, he gathers the world’s greatest heroes to fend off the seemingly unstoppable invading armada.