The World’s Finest presents the latest in a series of studio-conducted interviews, provided by Warner Home Video, for the upcoming Justice League: Crisis on Two Earths direct-to-video animated feature. Continue reading below for the latest installment featuring actor Bruce Davison.

Bruce Davison is no stranger to political office at least in a fictional situation. Hes played an ambassador, senator, congressman and judge, but Davison steps up in class in his first voiceover for animation as President Wilson in Justice League: Crisis on Two Earths, an all-new DC Universe Animated Original PG-13 Movie coming February 23, 2010 from Warner Premiere, DC Comics and Warner Bros. Animation.

In Justice League: Crisis on Two Earths, a good Lex Luthor arrives from an alternate universe to recruit the Justice League to help save his Earth from the Crime Syndicate, a gang of villainous characters with virtually identical super powers to the Justice League. What ensues is the ultimate battle of good versus evil in a war that threatens both planets and puts the balance of all existence in peril. Davisons President Wilson is caught in the middle of the battle, attempting to find a balance between leading the human citizens of the parallel Earth and not being crushed by the powerful Crime Syndicate.

Davisons credits stretch through film and television to the tune of 160 different movies and series roles, catching the worlds attention in 1971 as the title character in the benchmark rat-attack thriller Willard. He has since been a regular on primetime series, covering the gamut from The Waltons, Murder She Wrote and thirtysomething to Seinfeld, Lost, Close to Home and Knight Rider. Davisons film career has featured memorable and critically acclaimed roles in X-Men and X2, Six Degrees of Separation, Short Cuts, Grace of My Heart and Longtime Companion, the latter performance garnering an Academy Award nomination, a Golden Globe Award, an Independent Spirit Award, and top honors from the National Society of Film Critics and the New York Film Critics Circle. Though he has recorded numerous books-on-tape, Justice League: Crisis on Two Earths represents Davisons first foray into the animated world.

During his recording session, Davison had a few minutes to discuss his inaugural animated role, his personal history with super heroes, an early adoration for EC Comics, and his ascent up the fictional political ladder. Well let his words take it from here

QUESTION: Whats it like being one of two characters without super powers in an all-super hero movie?

BRUCE DAVISON: Well, its par for the course. In X-Men, I played Senator Kelly and, as my son likes to say, I didnt really have any powers I just melted. Its tough when your action figure can’t stand up. I had to stick it in a glass of water because it didn’t have any feet, just this sort of drippy stuff off the bottom (he laughs). So I’m used to not having any real strength powers. But President Wilson is a pretty macho guy, which is great.

QUESTION: And youve got a nice progression here. Marvel makes you a senator, DC makes you President …

BRUCE DAVISON: Yes, I AM the President (he laughs). And I actually have feet in this one, plus an eye-patch. So Im definitely moving up in the super hero world.

QUESTION:How did you enjoy your maiden voyage into animation voiceovers? 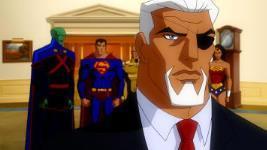 BRUCE DAVISON: I’ve done books-on-tape, including a Stephen King book and a few other things. But it’s really interesting to be a character that will then be created as opposed to trying to fit in. I’ve spent a lifetime voicing over (looping) myself in films over the years. But it’s a lot easier to just create something and then let the animators put it together. Oh, and it’s just a blast doing the recording it’s like being six years old again.

QUESTION: Were you picturing the character in your head while recording, or just focusing on conveying certain emotions?

BRUCE DAVISON: Well, I always try to look at my characters as being better than I am. That’s one of the reasons I guess I became an actor because you get to create a persona that’s bigger or better or more interesting than your own. I sort of found President Wilson to be like Dale Dye, the guy that does all the military shows on History Channel. The guy who gets in the trenches. He’s been there, done that. So, I’d better shape up.

QUESTION: Did super heroes play a role in your youth?

BRUCE DAVISON: I hate to date myself, but my earliest memories are Flash Gordon. I would love playing Flash Gordon in the neighborhood. We lived outside of Philadelphia in Drexel Hill, and I would be Flash Gordon and my friend was Dr. Zarkov and we’d get beat up by the Catholic kids, who were the clay people, on the way home from school. And then we’d have auditions for Dale Arden. So that was sort of my childhood fantasy.

QUESTION: Do you remember any first experiences with Superman or Batman?

BRUCE DAVISON: Oh, yeah George Reeves working with Truth, Justice, and the American Way you know, in the ’50s when there were just three channels on the TV, and you watched the Indian on the Test Pattern until nine when things started coming on.

I did have a cape and I did jump off my stairs and survived (laugh). I really loved running around the hill, trying to do the whole Truth, Justice and the American Way thing (hums the theme song). Id try to take off just like he did, and end up sliding on my face down the hill. But that was always off camera for me and I figured they didn’t see that part, just the great take off (laughs).

QUESTION: How did comic books influence your upbringing?

BRUCE DAVISON: I was a major EC Comic freak. I just loved them all. Tales Of The Crypt, Weird Science all of the older stuff. I just really loved the artwork Wally Wood and all of those great artists. But they scared the bejesus out of me as a kid. I remember one very vivid comic in which a baseball player would spike people, sliding into everybody, so they cut him all up and played baseball with his head and used his legs as the bats. I think they used his trunk as home plate. That really scared me (he laughs). It was a really interesting time. They used to run articles in the comics about how people in Congress were trying to make it a Commie plot to ban EC. I found that really interesting that was really the dawning of my first understanding of politics and censorship.

QUESTION: Why are superheroes important for us?

BRUCE DAVISON: I think it gives us a sense of idealism and strength that we don’t have but we wish we did. Its like, why do we create religion? Because we need super heroes to take care of us, to live up to.

QUESTION: You’ve done so many different things. What do people most often recognize you for?

BRUCE DAVISON: Well, if they’re my age, probably Willard, because that was an impressionable movie when you’re young. The younger people know me from X-Men. And then if you’re 12, its Knight Rider. Its as though every few years something comes along and then I’m sort of remembered for that. But people don’t really know that I can do anything else until the next time.

QUESTION: Did you learn anything from your first animation voiceover experience? 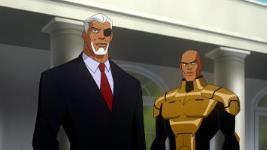 BRUCE DAVISON: I learned it’s a lot of fun. It really is. And you just have to sort of wing it with the other actors. You do have to work within the iambic pentameter of the technical world of the medium. You can’t pop things and you can’t get too close to the microphone and you can’t get too breathy. You really have to sort of create a character vocally within a framework of technology. So you can’t step out of it in order to do something that maybe you would do as an actor on film or on stage. When you’re on stage, even a whisper, you have to reach very far away. In film, you can be much more intimate. But just using your voice, you have to create something that’s somewhere in the middle so that it paints a picture and yet it’s not intimate enough to get lost.

Pres_Lex.jpg
The two men fighting for good on an alternate Earth President Wilson (voiced by Bruce Davision) and Lex Luthor (Chris Noth) have their hands full with the Crime Syndicate until reinforcements are recruited in Justice League: Crisis on Two Earths, the next DC Universe animated original movie. The film will be distributed February 23, 2010 by Warner Home Video.

Pres_JL.jpg
President Wilson (voiced by Bruce Davision) is caught between good and evil super heroes while trying to protect his planet in Justice League: Crisis on Two Earths, the next DC Universe animated original movie. The film will be distributed February 23, 2010 by Warner Home Video.

Green Lantern: First Flight
Cartoon Network, Saturday, January 16th, 2010 at 8:00pm (ET)
When pilot Hal Jordan accepts a mysterious, powerful ring from a dying alien creature, it transforms him into a Green Lantern, one of an elite force of heroes who patrol the universe to ensure peace and justice under the leadership of the Guanrdians of the Universe. Unsure of their newest recruit, the Guardians assign Hal to their most-honored Green Lantern Sinestro for training., unaware that Sinestro wants to overthrow the Guardians and create a new order he’ll control. It’s a battle of might and willpower as Hal must prove his worth by defeating Sinestro and saving the Green Lantern Corp. 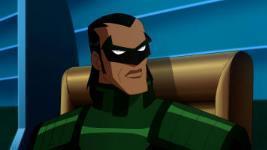 Nolan North, providing the voice of Green Lantern in the Justice League: Crisis on Two Earths animated feature, will also voice Green Lantern’s evil counterpart Power Ring. North is currently known among genre fans for his work as Cyclops in the animated Wolverine and the X-Men, Deadpool in the Hulk Versus feature, Nathan Drake in the Uncharted video game series, among countless other roles.

Lastly, the evil Johnny Quick is voiced by actor James Patrick Stuart. Well-known for his role as “Keith” in the cult Andy Richter Controls the Universe television series, Stuart has an extensive resume of television and voice-over work, including a stint on CSI, the recent 90210 prime-time revamp, and a recurring role as “Avalanche” on the animated Wolverine and the X-Men series, among other roles. Quick is the Crime Syndicate’s villianous take on The Flash.

Click on the thumbnails below for a closer look at the assorted updated package artwork for the upcoming home video releases of the Justice League: Crisis on Two Earths direct-to-video animated feature. 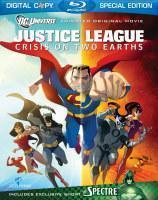