All content included on the above releases are identical to the previous single-disc home video releases of each title. DC Universe 3-Pack Action will be released alongside DC Kids 3-Pack Fun, a similar releases collection three “kids-friendly” titles in one collection. More details can be found here.

Initial details and cover artwork for the upcoming Batman: The Brave and The Bold Season Two, Part One, set to hit shelves August 16th, 2011, have been made available by Warner Home Video. A full press release is expected to be released within the coming days. The two-disc release is set to include twelve more episodes from the acclaimed animated series, though details of any additional bonus features are currently unconfirmed. Official details are available below.

Batman: The Brave and The Bold Season Two, Part One

Batman wings into an exciting new era, teaming with a mighty honor roll of DC Comics Super Heroes in this action-packed series. Through the shows season two 12 Animated Adventures in this 2-Disc Collection, the Dark Knight allies with Aquaman, Plastic Man, Blue Beetle, Red Tornado, Green Arrow, Wildcat, Deadman, Bronze Tiger and Atom to take on an array of evildoers ranging from mad scientists to intergalactic crooks, from power-mad dictators to out-of-control teenagers.

Stay tuned for further details on this title, including the official press release and further images, here soon at The Worlds Finest. The Batman: The Brave and The Bold Season Two, Part One two-disc DVD release is set to hit shelves August 16th, 2011.

Young Justice #3, the latest issue of the new DC Comics title based on the current Cartoon Network animated series, arrives in comic book and hobby stores today. The issue, written by Art Baltazar and Franco with artwork by Mike Norton, features the young heroes facing off against the League of Shadows. Official details for this issue are available below.

Written by: Art Baltazar and Franco
Art by: Mike Norton

Robin’s a bit jealous of Superboy’s abilities. But when they have to rescue the inhabitants of a burning building, The Boy Wonder might learn that one doesn’t need super powers to be a true Super Hero.

Please note the above synopsis, provided by DC Comics, does not accurately reflect the contents of the issue. The cover price is $2.99US. Young Justice #3 is also available same day digitally through DC Comics and Comixology.

Preview Of “Young Justice/Batman: The Brave And The Bold – Super Sampler” Comic

Click on the image below to view a five-page preview of the upcoming Young Justice/Batman: The Brave and The Bold – Super Sampler one-shot from DC Comics, set for release on Free Comic Book Day – Saturday, May 7th, 2011. The preview is in PDF format. 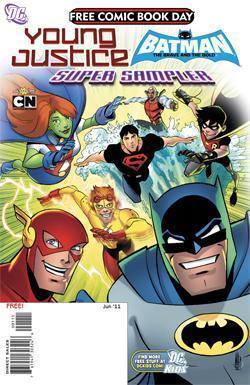 Young Justice/Batman: The Brave and The Bold – Super Sampler will be available for free.

Stay tuned for further updates here soon at The World’s Finest, including updates on both Young Justice and Batman: The Brave and The Bold.

“The All-New Batman: The Brave And The Bold” Collection Arriving September 2011

While an exact street date has not been set, The All-New Batman: The Brave and The Bold – Volume One is set to hit shelves in September 2011. Please note that name is also temporary, and will likely change before the final product and street date details are released by DC Comics.