“Batman: Gotham Knight” Animated Feature Scheduled To Air On Teletoon In May 2009

The Batman: Gotham Knight animated feature, which previously premiered on home video in 2008 to coincide with the live-action The Dark Knight theatrical release, is slated to air Friday, May 22nd, 2009 at 9:30pm (ET) as part of the Teletoon Detour programming block on Teletoon. Below is the official synopsis for the feature.

Batman: Gotham Knight
Teletoon, Friday, May 22nd, 2009, at 9:30pm (ET)
Acclaimed screenwriters including David Goyer (Batman Begins), Josh Olson (A History of Violence) and Alan Burnett (Batman: The Animated Series) join forces with revered animation filmmakers on six spellbinding chapters chronicling Batman’s transition from novice crimefighter to The Dark Knight. These globe-spanning adventures pit Batman against the fearsome Scarecrow, the freakish Killer Croc and the unerring marksman Deadshot. From some of the world’s most visionary animators comes a thrilling depiction of Batman as man, myth and legend.

Note: The World’s Finest News Staff will be on vacation next week, from April 13th – April 17th, 2009, meaning there will be no regular news updates posted during that time. However, any special reports or breaking news will be posted, so check back daily and keep an eye on the forums. Expect the regular news updates to return on April 20th, 2009.

The Batman: Gotham Knight trailer is featured on the second disc of the upcoming The Dark Knight: Two-Disc Special Edition DVD release. The trailer plays before the main menu kicks in.

Announced earlier this week, both Batman: Gotham Knight and Justice League: The New Frontier have received nominations in the 36th Annual Annie Awards, the awards that recognize the years best animated features, television productions, commercials, video games and short subjects. The nominations are as follows.

The Annie Awards honor overall excellence in the field of animation as well as individual achievement in a total of 24 categories ranging from production design, character animation, and effects animation to storyboarding, writing, music and voice acting.

More information can be found at the official website for the 36th Annual Annie Awards. Winners will be announced on January 30th, 2009, so stay tuned for further updates.

The feature, comprised of six different short stories, is scheduled to air Saturday, October 4th, 2008 at 9pm (ET). The official description of the feature is seen below. 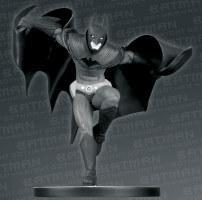