New images and the following press details on the upcoming The Spectre animated short, the initial entry in the all-new “DC Showcase” series of animation shorts, available below, are provided by Warner Home Video and Warner Bros. Animation. Click on the thumbnails featured for a closer look at each image.

From the creative forces behind the PG-13 “DC Universe Animated Original Movie” line, “DC Showcase” puts the spotlight on favorite characters from throughout the annals of DC Comics in fascinating, short-form tales sure to entertain longtime and new fans alike.

The Spectre focuses on a detective story with an ethereal twist, featuring the otherworldly character originally introduced by DC Comics in 1940. The short is written by Steve Niles (30 Days of Night) and directed by Joaquim Dos Santos (G.I Joe: Resolute). The voice cast is led by Gary Cole (Entourage) as the title character and Alyssa Milano (Charmed) as Aimee Brenner.

The Spectre will be distributed February 23 by Warner Home Video as part of the Justice League: Crisis on Two Earths Blu-ray/DVD.

Spectre_06.jpg
The Spectre makes his animated debut as the title character in the inaugural entry within the “DC Showcase” series of animation shorts. Gary Cole (Entourage) provides the voice of The Spectre, which will be distributed February 23 by Warner Home Video as part of the Justice League: Crisis on Two Earths Blu-ray/DVD.

Flynn_02.jpg
Special effects wizard Drew Flynn gets spooked inside his own personal house of horrors in The Spectre, the first entry within the “DC Showcase” series of animation shorts. The Spectre will be distributed February 23 by Warner Home Video as part of the Justice League: Crisis on Two Earths Blu-ray/DVD

Aimee_Corr.jpg
A bit of romantic history flows between Detective Corrigan and Aimee Brenner in The Spectre, the inaugural entry within the “DC Showcase” series of animation shorts. Gary Cole (Entourage) and Alyssa Milano (Charmed) provide the voices of Detective Corrigan and Aimee Brenner, respectively. The Spectre will be distributed February 23 by Warner Home Video as part of the Justice League: Crisis on Two Earths Blu-ray/DVD.

GREEN LANTERN: FIRST FLIGHT ADDS ENCORE PRESENTATION AT COMIC-CON INTERNATIONAL ON SUNDAY, JULY 26
The overwhelming success of Thursday nights World Premiere of Green Lantern: First Flight at Comic-Con International which drew a SRO Crowd of 4,200+ fans, yet turned away 1,500 more has led Warner Home Entertainment Group to add an encore presentation of the film at CCI on Sunday, July 26 at 2:15 p.m.

Those lucky enough to gain entrance to Thursdays screening were treated to an introduction from the films executive producer, Bruce Timm. The animation legend then prompted an unofficial world record event. Timm encouraged all 4200+ to stand a recite the Green Lantern oath along with him and nobody stayed seated. Official certification by Guinness World Records is pending.

Warner Home Video will distribute the all-new film as a special edition 2-disc DVD, a Blu-Ray Hi-Def edition, as well as single disc DVD on July 28, 2009. The action-packed movie will also be available OnDemand and Pay-Per-View as well as available for download day and date, July 28, 2009.

Sundays encore presentation will be held in Room 6BCF. CCI credentials/passes are required to gain admittance to the Convention
Center and, thus, the screening.

In other news from Warner Home Video

KEVIN CONROY AND CLANCY BROWN GET GRAND CCI GREETING
The definitive voices of Batman and Lex Luthor, Kevin Conroy and Clancy Brown, respectively, made their long-awaited appearances at CCI during a Superman/Batman: Public Enemies panel on Friday, July 24. The pair was greeted with an extended round of cheers and applause from a crowd of 2,100 fans during the early evening panel.

Conroy has not attended CCI in six years, while Brown has never made an appearance at the San Diego convention. Both fan favorites will be signing autographs at the Warner Bros. booth (4239 on the Comic-Con main floor) on Saturday, July 25 from 11:00 a.m. until Noon.

Superman/Batman: Public Enemies, the sixth entry in the popular DVD series of DC Universe animated original PG-13 movies, will be distributed by Warner Home Video on September 29, 2009 as a Special Edition 2-disc version on DVD and Blu-Ray Hi-Def, as well as single disc DVD and On Demand.

While Noveck said the group was not yet prepared to issue any details of titles, distribution or release dates, he did admit that a Jonah Hex short written by Joe Lansdale would be among the initial series of animation shorts. 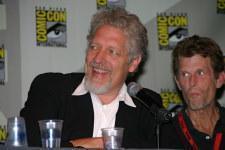 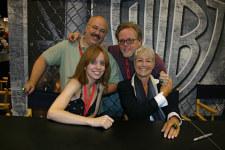 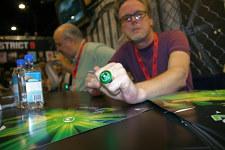 Kevin Conroy.jpg
Kevin Conroy, the definitive voice of Batman for the past two decades, returned to Comic-Con International for the first time in six years for a Superman/Batman: Public Enemies panel on Friday, July 24.