Michael Reaves Discusses His Work On “Batman: The Animated Series”

Below is an excerpt from the interview: 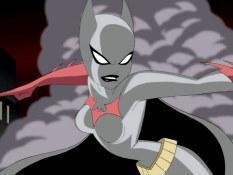 The World’s Finest: Concerning your work on the DC Animated Universe, let’s work our way backwards a little bit. Your last listed work for the DCAU was the DTV film Batman: Mystery of the Batwoman. How did that project come about? Did you pitch the concept initially? And were you pleased with the outcome?

Michael Reaves: How it came about was simple WBA decided to do one last DTV about Batman. They gave it to Alan Burnett, who was my producer on TAS, and he hired me to write it. He had to fight for me a little, since WBAs (perfectly sensible) attitude was, Why hire an outside writer when we have writers on staff? But Alan went to bat (so to speak) for me, and you know the rest.

WF: Reaction from Batman: Mystery of the Batwoman was a bit mixed. Some fans really loved it, particularly the introduction of Batwoman, while others were hoping for a little bit more substance for the last Batman: TAS DTV. How do you respond to that? Do you think the fans are being ungrateful or . . . well . . . just fans?

MR: Everyones entitled to an opinion. It was a conscious decision to lighten this one up a bit; we felt that, over the years, wed put Bats through a fair bit of angst and suffering, and since this would be our farewell to the TAS universe, why not let him get the girl for once?

“Batman: Gotham Knight” To Premiere Next Week At WizardWorld Chicago

The Batman: Gotham Knight premiere will commence at 7:00 p.m. in the 1,500-seat hall within the Donald E. Stephens Convention Center, and the screening will be followed immediately by a panel featuring executive producer Bruce Timm (Superman Doomsday, Justice League: The New Frontier) and a quartet of the film’s writers: Academy Award nominee Josh Olson (A History of Violence), Eisner Award-winning writers Brian Azzarello & Greg Rucka, and five-time Emmy Award-winner Alan Burnett. The film will be introduced by DC Comics President and Publisher Paul Levitz, and DC Comics Senior Vice President of Creative Affairs Gregory Noveck will moderate the panel.

As a capacity crowd is anticipated, the premiere is a ticketed event. Free tickets for convention attendees will be distributed starting at 10:00 a.m. Saturday, June 28 in the Wizard World Chicago ticketing area.

The panelists will be available for a 90-minute autograph session on Sunday beginning at 10:30 a.m. in the Fountain Area. An encore presentation of the film will screen Sunday at 2:00 p.m., and seating will be allotted on an un-ticketed, first-come, first-served basis.

Batman: Gotham Knight is a fresh and exciting new entry into the Batman mythos, spinning out of a 40-year history in animation including the Emmy(R)-winning Batman: The Animated Series, widely considered a pivotal moment in American animation. A cross section of distinguished creators, award winning producers, and acclaimed writers weave six interlocking stories that reveal Bruce Wayne’s journey to The Dark Knight, each with stylish art from some of the world’s most revered animation visionaries.

Batman: Gotham Knight will arrive July 8, 2008 on DVD and Blu-Ray disc, and will also be available On Demand via digital cable and for download through broadband sites.

DC UNIVERSE ORIGINAL MOVIES
DC Comics, Warner Premiere, Warner Home Video (WHV) and Warner Bros. Animation (WBA) began the production and distribution of “DC Universe,” a series of original, animated PG-13 movies in July 2006. This original made for DVD movie is part of the DC Universe series of animated PG-13 films written and directed by acclaimed comic book creators and animators and featuring recognizable talent. WHV will be the exclusive worldwide home entertainment distributor for all DC Universe movies, which will include a slate of 2-3 action-packed films per year. Superman Doomsday and Justice League: The New Frontier were the first DC Universe original animated movies. Other DC properties with films in development include Justice League, Green Lantern, Flash and Wonder Woman.

Click on the above images for a closer look. Stay tuned for further updates. 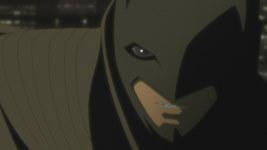 The segment, “Field Test,” is the third story out of six in Batman: Gotham Knight. The segment written by Jordan Goldberg, associate producer of The Dark Knight.

Comcast describes the segment as follows, as seen below:

“Writer Jordan Goldberg showcases the incredible arsenal Batman commands and reveals that there are some things even Batman won’t do in the pursuit of justice.”

The segment is 11 minutes and 36 seconds in length.

Information on the “animated comics” can be found below.

What happens when Batman and Robin chase villains around Gotham all night? Dick Grayson falls asleep in class! Between his angry teacher and the monstrous Killer Moth Robin’s in for one long day. On sale September 3rd, 2008.

THE LEGION OF SUPER-HEROES IN THE 31st CENTURY #18

Computer chaos hits New Metropolis, crippling the high-tech city and throwing the Legion into the Dark Ages as communications crash, starships collide and magic takes over! Brainiac 5 has to prove that science is stronger than sorcery…but will he have to give up his place in the Legion to do it? On sale September 10th, 2008.

To view the full-size image, click the thumbnail below. 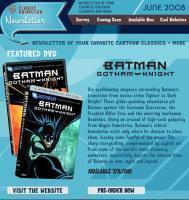