While issue #17, which is currently on stands, is an accessible stand-alone story, it will also include elements that will come into play over the following two issues, forming what Torres calls a “bigger drama.” Having been the regular writer for the series, Torres is able to tell stories that are more than the standard “done in one” variety.

Torres states that while each issue is a standalone tale, all three issues will work together to form an over-arching storyline called, “Flight Ring.” For fans interested in how Brainiac 5 will be handled, especially given his status at the end of the second season of Legion of Super Heroes, Torres says that while they will not be able to offer any in sight into where he went and what happened, due to time constraints, the character’s status will be addressed during these three issues.

Click here to discuss Legion of Super Heroes In The 31st Century #17!

The soundtrack, originally released on July 22nd, 2008, hit multiple snags during production, including an extended period of legal clearances for artwork and copyright trademarks before finally nailing down each respective release. However, despite the original release date, most businesses and consumers did not receive copies of either soundtracks until the second week of August 2008. The soundtracks, now having been officially released for nearly a month, is now readily available to purchase both at local stores and online.

The World’s Finest has reviews of both of the soundtrack releases, which you can read by clicking the thumbnails below. 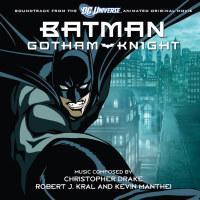 More soundtracks based around DC Comics’ animated properties are currently in the works. Stay tuned for further updates.

The official details are below.

THE LEGION OF SUPER-HEROES IN THE 31st CENTURY #20

Metallo journeys to the future for the ultimate power source: Kryptonite! But if he destroys Superman, will the Legions fate unravel, as well? Dont miss the exciting conclusion to this amazing series! On sale November 12th, 2008.

A comic book spin-off for Batman: The Brave and the Bold is planned for a December 2008 launch, but that date is subject to change. Stay tuned for further updates.

The final issue, Legion of Super Heroes In The 31st Century #20, finds the evil Metallo going to the future to find Kryptonite, putting Superman in danger and fate of the Legion at risk. The story is written by Jack Briglio with art by Phil Moy & John Stanisci.

Stay tuned for further details and artwork when DC Comics releases their official details for their November-shipping titles later today.