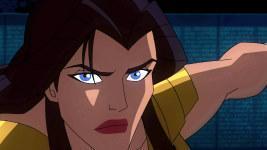 New Images And Clips From Upcoming “Batman: The Brave And The Bold” Episode

Cartoon Network has passed along the episode synopsis and over a dozen new images for the upcoming Batman: The Brave and The Bold episode “Enter The Outsiders!.” To get a closer look at the images, click on the thumbnails below.

In this weeks episode Batman and his mentor Wildcat face off against a group of teens–the Outsiders–whose violent pranks turn to criminal activity under the control of the evil Slug. Batman and B’Wana Beast team up to take down Black Manta in teaser.

Further Details On Upcoming “Batman: The Brave and The Bold” January 2009 Episodes 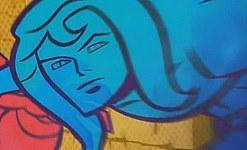 Director Ben Jones has confirmed for The World’s Finest that Kamandi will be appearing in the pre-credit sequence in the upcoming Batman: The Brave and The Bold episode “Dawn of the Deadman!,” scheduled to air January 16th, 2009 at 8pm (ET) on Cartoon Network. The image above, from the opening credits for Batman: The Brave and The Bold, features Kamandi in the foreground. The episode, written by Steven Melching and directed by Jones, features Batman and Deadman facing off against The Gentleman Ghost. Michael Rosenbaum, well-known as The Flash from Justice League Unlimited, provides the voice for Deadman.

Cartoon Network has scheduled new episodes of Batman: The Brave and The Bold every week for the month of January 2009, including the upcoming episode “The Fall of the Blue Beetle!,” featuring both the modern and Silver Age Blue Beetle, set for January 23rd, 2009. The Silver Age Blue Beetle, voiced by Wil Wheaton, will be featured in both the episode’s teaser and main story. “The Fall of the Blue Beetle!” is written by Jim Krieg and directed by Brandon Vietti. Then the episode “Journey to the Center of the Bat!,” featuring the Atom and Aquaman shrinking themselves to fight a virus in Batman’s bloodsream after he’s been poisoned by Chemo, is scheduled to air January 30th, 2009. “Journey to the Center of the Bat!” is written by Matt Wayne and directed by Michael Chang.

The next new episode of Batman: The Brave and The Bold, “Enter the Outsiders!,” featuring Wildcat and The Outsiders, is set to premiere this Friday, January 9th, 2009, at 8pm (ET) on Cartoon Network.

To view the back cover art, click on the thumbnails below.