Teletoon Releases March 2009 Schedule For “Batman: The Brave And The Bold” Episodes

Below are official descriptions and airdates for the new episodes of Batman: The Brave and The Bold slated for March 2009 on the Canadian network Teletoon. Please note the information listed below is provided by Teletoon.

Sunday, March 1st, 2009 – “Fall of the Blue Beetle!”
Blue Beetle traces his legacy back to the original Blue Beetle, to learn why the Scarab has chosen him to share in its powers and become a super hero. The journey leads him to the dangerous Science Island where he battles legions of robots alongside Batman and learns the truth behind Ted Kords disappearance.

Sunday, March 8th, 2009 – “Journey to the Center of the Bat!”
Batman is poisoned by Chemo, who is under the Brain’s control, and Atom and Aquaman shrink down to fight the virus in his bloodstream.

Sunday, March 15th, 2009 – “The Eyes of Despero!”
The Green Lantern Corps is MIA after a battle with Despero and Batman must team with G’Nort, Guy Gardner and Sinestro to defeat Despero before he turns a living Green Lantern planet into a weapon.

Sunday, March 22nd, 2009 – “Return of the Fearsome Fangs!”
Batman and a reluctant Bronze Tiger fight to prevent Fox, Vulture and Shark from invading an ancient Chinese temple and stealing the sacred animal totem from within.

Video Clip And New Images From Upcoming “Batman: The Brave And The Bold” Episodes 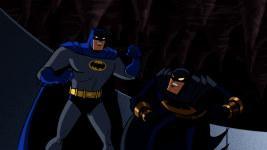 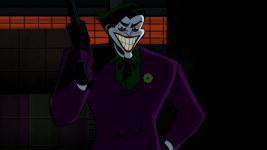 When parallel worlds collide, Batman swaps places with Owlman–his criminal counterpart in an alternate universe–to stop the Crime Syndicate from taking over their world. Crime fighters in one world must battle their evil counterparts in a crime spree melee. Meanwhile back on Earth, Owlman has been perpetrating crimes disguised as Batman and assembled all the villains to join him. When Batman returns, he finds himself on the wrong side of the law and hunted by Green Lantern, Aquaman, Blue Beetle, Red Tornado and Plastic Man. Its a strange twist of fate that leaves Batman with only one option – to team up with Joker and take Owlman and the Crime Syndicate down!

Further information on this two-part special event is available at our our Batman: The Brave and The Bold subsite. Stay tuned for further episode details and exclusive content.

Please note the all-new Batman: The Brave and The Bold episode Return of the Fearsome Fangs! airs tonight, February 20th, 2009, at 8pm (ET) on Cartoon Network.

Note: Cartoon Network provided revised airing schedules for this two part “Batman: The Brave and The Bold” event. Please look above for more.

Warner Bros. Animation has confirmed for The World’s Finest that New Line Records will be releasing the soundtrack to the upcoming direct-to-video Wonder Woman animated feature. The New Line Records release is slated to arrive before the end of the third quarter 2009, though that date is subject to change. The format for the release is currently planned as a New Line Records legal download with La-La Land Records releasing the same content on compact disc. Further details are not yet known, but stay tuned for further updates on the soundtrack release for Wonder Woman.

Click here to enter the “Wonder Woman – Get Drawn In!” sweepstakes!

BATMAN: THE BRAVE AND THE BOLD #5

Children everywhere are missing thanks to the Queen of Fables! Its up to Batman and Captain Marvel to give this mystery a happy ending! On sale May 27th, 2009. Cover price is $2.50 US.

On a related note, Cartoon Network has scheduled the new Batman: The Brave and The Bold episode “Return of the Fearsome Fangs!” to air this Friday, February 20th, 2009, at 8pm (ET). Click here to view images and video clips from this week’s new episode. 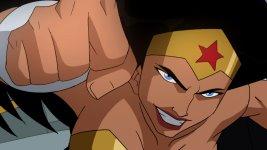 Wonder Woman, the highly-anticipated fourth entry in the DC Universe animated original movie series, will receive a West Coast big screen premiere at WonderCon on February 27, 2009 in the Moscone Center in San Francisco.

Presented by Warner Premiere, Warner Bros. Animation and DC Comics, the all-new Wonder Woman animated original movie will be distributed by Warner Home Video on March 3, 2009. Wonder Woman will be available as a Single Disc DVD, 2-Disc Special Edition DVD and Blu-ray Disc. The animated original movie will also be available OnDemand and Pay-Per-View, as well as available for download day and date, March 3, 2009.

An autograph session for all panelists is being scheduled for Saturday, February 28.

Click here to enter the “Wonder Woman – Get Drawn In!” sweepstakes!