Batman Beyond #1 is scheduled to hit shelves June 30th, 2010. This new six-issue comic mini-series from DC Comics officially brings the fan-favorite characters from the Batman Beyond animated series into DC Comics continuity lore. Official details on the upcoming Batman Beyond mini-series are available to view here at The World’s Finest. Cover price is $2.99US.

Click here for a The World’s Finest interview with Adam Beechen, writer of the upcoming Batman Beyond mini-series.

Stay tuned for other updates here soon at The World’s Finest.

Teletoon Retro has provided schedule details for classic Batman: The Animated Series episodes scheduled to air on the specialty Canadian network this month, in May 2010. Please note the schedule information listed below is provided by Teletoon.

Friday, May 7th, 2010 – “Vendetta”
Batman suspects that an imprisoned Detective Bullock may be innocent after he is arrested for murder. The real murderer turns out to be Killer Croc, who framed Bullock to get revenge.

Friday, May 14th, 2010 – “Mad as a Hatter”
The Mad Hatter puts the city of Gotham under his control in an attempt to impress a woman, Alice, with whom he is in love. However, when he discovers that she likes someone else, he plans to exterminate the competition and kidnap Alice.

Friday, May 21st, 2010 – “Dreams in Darkness”
Batman must thwart the Scarecrow’s plan to poison Gotham’s water supply with a chemical that induces hallucinations.

Friday, May 28th, 2010 – “Perchance to Dream”
Bruce Wayne wakes up to find that his parents are not dead, he is not Batman, and he’s engaged to Selina Kyle!

Please note Batman: The Animated Series will be pre-empted on Friday, May 7th, 2010 at 6:00pm (ET) due to special programming. Schedule details are subject to change without notice.

Warner Home Video is slated to reissue the Justice League: The Complete Series DVD collection on Tuesday, May 25th, 2010. When asked why this title is being reissued, the representative for Warner Home Video could not confirm any specific reason. High demand resulting in a new re-issuing of the collection was cited a possible reason, though it could not be verified.

The Justice League: The Complete Series was originally released in November 2009, repacking previous Justice League multi-disc releases into one single collection. Click here to see further details from the release here at The Worlds Finest.

“Batman: The Brave And The Bold” May 2010 Episode Schedule For Cartoon Network

Friday, May 14th, 2010 at 7:30pm (ET) – “Long Arm of the Law!”
Kite Man, comes back for revenge against Plastic Man. With the help of his unstoppable henchmen Rubberneck, he imperils Plastic Man’s loved ones and threatens to remove the heroes powers forever.

Friday, May 21st, 2010 at 7:30pm (ET) – “Inside the Outsiders!”
Batman and the Outsiders are under a metaphysical attack by Psycho Pirate. Batman enters the Mindscape and helps Black Lightning, Katana and Metamorpho battle their own personal demons.

Friday, May 28th, 2010 at 7:30pm (ET) – “When OMAC Attacks!”
The all-American fighting machine OMAC is pitted against the equally destructive Shrapnel in a chaotic fight to the finish, but the architect behind the battle is the mysterious, balance-obsessed villain Libra.

Friday, June 4th, 2010 at 7:30pm (ET) – “The Last Bat on Earth!”
Gorilla Grodd travels to the future where intelligent animals rule humans — Batman follows him and teams with Kamandi (the last boy on Earth) to bring him down.

Blu-ray And DVD Art For Upcoming “Batman: Under The Red Hood” Animated Feature

Click on the thumbnails below for a closer look at the assorted package artwork for the upcoming home video releases of the Batman: Under The Red Hood direct-to-video animated feature. 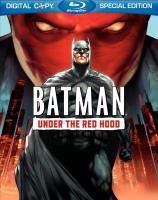