Cartoon Network and Warner Bros. Animation released two clips from the upcoming Young Justice episode “Targets” during the weekend San Diego Comic-Con 2011 event. The clips were released to promote the slate of upcoming new episodes of Young Justice set to hit Cartoon Network Fall 2011. Click on the thumbnails below to view the clips in the High-Definition Quicktime format. 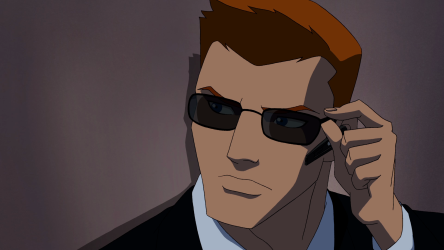 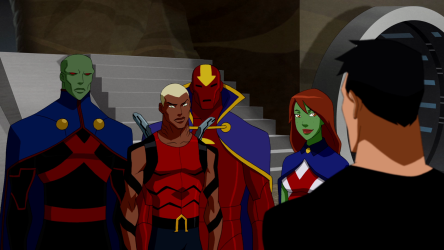 The official synopsis for “Targets” is available below.

Red Arrows battle to prevent the League of Shadows from inciting a war, pits him against the worlds most dangerous assassins and allies him with someone more dangerous still. Too bad Aqualad couldnt convince him to ask the team for help

Young Justice currently airs Fridays at 6:00pm (ET) on Cartoon Network, but will move to its new 6:30pm (ET) Friday timeslot beginning August 5th, 2011 to accommodate the return of Batman: The Brave and The Bold to the network line-up and the premiere of the new ThunderCats animated series. New episodes of Young Justice are slated to debut Fall 2011 on Cartoon Network. 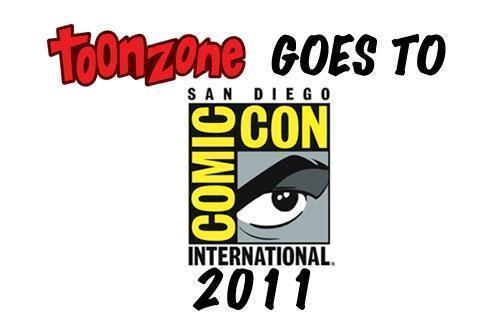 During a discussion panel following the San Diego Comic-Con 2011 debut of Batman: Year One, the next entry in the DC Universe Animated Original Movie line coming to Blu-ray and DVD October 18th, 2011, executive producer Bruce Timm revealed the slate of animated titles to be released in 2012 from the Warner Home Video series. The 2012 DC Universe Animated Original Movie titles will feature a string of adaptations of acclaimed and popular works from DC Comics history.

The previously-announced Justice League: Doom is slated to be the first DC Universe Animated Original Movie title released in 2012. The animated movie, written by the late Dwayne McDuffie, is set to be a loose adaptation of the fan-favorite JLA: Tower of Babel storyline written by Mark Waid.

Set for a mid-2012 release is Superman Versus The Elite. No official details on this animated feature have been released at this time, though some speculate the movie will be based on the acclaimed one-shot Superman: What’s So Funny About Truth, Justice and the American Way, originally published in Action Comics #775.

Lastly, the DC Universe Animated Original Movie line will tackle its first two-part release with Batman: The Dark Knight Returns. The two-part animated feature adapts the acclaimed, popular comic mini-series of the same name by Frank Miller. Both parts are expected to be released within the 2012 calendar year, likely to tie into both the theatrical and home video release of the upcoming live-action film The Dark Knight Rises, but that is currently unconfirmed.

According to executive producer Bruce Timm, he states the two-part Batman: The Dark Knight Returns animated feature will be very faithful to the source material. The above details were revealed during discussion panel following the San Diego Comic-Con debut of Batman: Year One on Friday, July 22nd, 2011.

Stay tuned for further updates on upcoming installments in the DC Universe Animated Original Movie line here soon at The World’s Finest. Click on each of the different links below to discussion this freshly announced animated features.

Discuss the Upcoming Superman Versus The Elites Animated Feature Here!

New episodes of Batman: The Brave and The Bold are scheduled to air during the Fall 2011 season on Cartoon Network. The series has recently completed production on the final episodes for its third and last season of regular installments.

Cartoon Network is expected to release further August 2011 schedule details next week. Stay tuned for further updates, including details on upcoming Batman: The Brave and The Bold and Young Justice episodes, here soon at The World’s Finest.

Warner Bros. Interactive Entertainment and DC Entertainment today released a new trailer for the upcoming Batman: Arkham City video game. The trailer focuses on The Penguin, who is featured in the upcoming video game sequel. Batman: Arkham City will be available October 18th, 2011 in North America for Xbox 360 video game and entertainment system from Microsoft, Games for Windows PC and the PlayStation3 computer entertainment system. Click on the thumbnail below to view the footage in the Quicktime format, along with additional press details for the title. 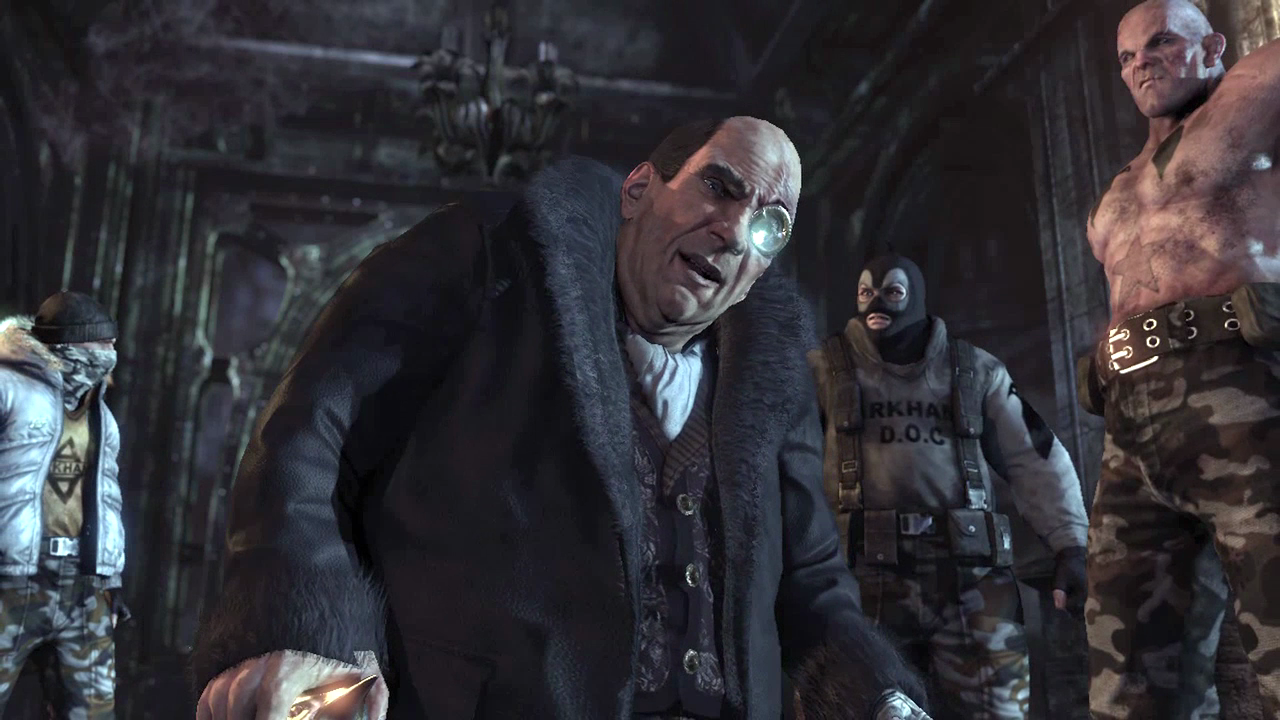 Oswald Chesterfield Cobblepot, AKA The Penguin, is continuing his shady business dealing within Arkham City, bringing chaos and corruption to the dark alleys and foreboding corridors of the sprawling cityscape. 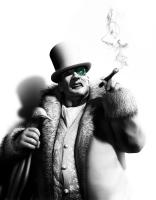 Warner Bros. Interactive Entertainment and DC Entertainment today released the new trailer for Batman: Arkham City showcasing the scheming villain in his role as the black market racketeer of Arkham. The foul fiend brings his criminal and financial genius, hand-to-hand expertise, treacherous toys and his feathered friends into the walled streets of Arkham City, with the sole aspiration of ridding the world of the Dark Knight.

The following additional Batman: Arkham City announcement and image has also been released. 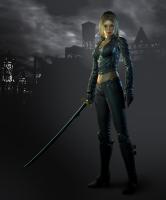 Talia is such a complex character and it was great to voice her in Batman: Arkham City, said Katic regarding her role in the game. I was amazed at all the detail put into the project and its great to see how excited the fans are about the game.

Continue below to check out the final package artwork, along with disc art, for the upcoming Justice League: Season Two Blu-ray release from Warner Home Video. The two-disc collection will be available at retail and online outlets on Tuesday, July 26th, 2011. Click on the images below for a closer look.

The Justice League: Season Two Blu-ray release also includes an exclusive new featurette “Infinite Realities: The Justice Lords and Beyond.” The featurette, which runs over 17 minutes, explores the idea of infinite realities and dopplegangers. Trailers for Young Justice, Green Lantern: Emerald Knight and the DC App are also included amongst the new content.

Additional details and previous coverage for this Blu-ray title, including a press release and more, can be found here and here.

Justice League: Season Two arrives on Blu-ray July 26th, 2011. The two-disc set will retail for the suggested price of $39.99. Stay tuned for further updates here soon at The World’s Finest.

Warner Bros. Interactive Entertainment and DC Entertainment have released the following trailer and details for the upcoming video game Gotham City Imposters. This new upcoming title is a first-person shooter which takes place within Gotham City, featuring two warring gangs. Gotham City Impostors is scheduled for release Winter 2012 and will be available on Xbox LIVE Arcade, PlayStation Network, and for PC download. Click on the image below to view the trailer. 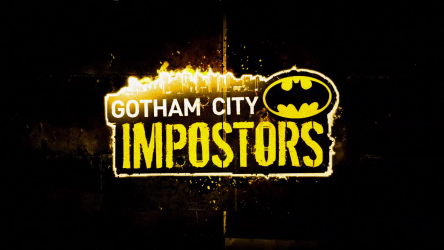 Gotham City Impostors, a multiplayer game unlike any other, gives players the opportunity to rebel against conformity as they customize their own characters. Posing as amateur vigilantes or villains, gamers will create their very own Bats and Jokerz characters using unprecedented customization options including insane costumes, homebrewed gadgets and a wide range of traditional and imagined weapons. The game will feature maps and modes inspired by DC Comics Batman license.

Gotham City Impostors, is scheduled for release Winter 2012 and will be available on Xbox LIVE Arcade and PlayStationNetwork. The game will also be available for download for PC. The expected price is $15 /1200 Microsoft Points.

New promotional artwork for the upcoming Batman: Year One direct-to-video animated feature has been released by Warner Home Video. The artwork featured below is not the final cover art for the title’s respective Blu-ray and DVD releases, but is instead used for promotional purposes by retailers. Click on the thumbnails below for a closer look. 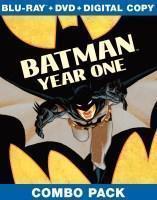 Batman: Year One is the twelfth entry in the acclaimed DC Universe Animated Original Movie line from Warner Home Video. The animated feature adapts the renowned graphic novel of the same name.

Details on the home video release of Batman: Year One, including a rundown of Blu-ray extras, can be found here, along with the official trailer. Additional updates in the aforementioned link include details on the San Diego Comic-Con 2011 premiere of the film, scheduled for 8:00pm (ET) Friday, July 22nd, 2011 at the annual convention, and final Blu-ray cover artwork.