Click on the thumbnail images below to view nine clips from the upcoming Young Justice: Season One, Volume Two DVD release in the High-Definition Quicktime format. Young Justice: Season One, Volume Two, collecting four episodes from the first season of the acclaimed animated series, will be available at retail and online outlets beginning October 25th, 2011. Please continue below for more.

In continuing Warner Home Video news, representatives for the studio have confirmed the direct-to-video animated feature Batman: Mystery of the Batwoman is slated for arrive on Blu-ray in April 2012. A specific release date is expected to be announced shortly. Batman: Mystery of the Batwoman was originally released to VHS and DVD in October 2003. Click here for details on the original home video release for this animated feature. Stay tuned for further updates here soon at The World’s Finest.

The World’s Finest caught up with Batman: The Brave and The Bold Producer James Tucker to discuss the latest episode of the acclaimed animated series, “Powerless!” The all-new episode debuts tonight, Friday, October 21st, 2011 at 7:00pm (ET) on Cartoon Network. The episode features the Jokers of All Nations and the Justice League International. Continue below for the all-new exclusive Batman: The Brave and The Bold Q & A with Tucker.

The World’s Finest: This episode opens with the “Batmen of all Nations” facing off against the “Jokers of all Nations.” Is it safe to say the “Batmen” are inspired by both the original 90s appearance by some of these Batmen as well as the recent Grant Morrison works? What inspirations did you take for the Joker’s rival gang?

James Tucker: Actually, I based this version of The Batmen on the original 50s version for the most part combined with some of the more recent versions. It wasnt specifically patterned after Morrisons version though. The Jokers of All Nations were picked based on what kind of humorous outfit we could put them in. Basically we picked countries that werent represented by the Batmen of All Nations already.

WF: Captain Atom is the spotlight hero in this episode. Could you explain your influences with this particular version of the character?

JT: The basic idea of this episode was what does a powerful superhero do when their superpowers are gone. Is it the man or the Superman that makes the hero? Originally this was conceived more as a showcase for Captain Atom, but I wanted to refocus it to include the Justice League International because we wanted to give them a certain amount of spotlight this season. Michael Jelenic and I wanted to make this version of Captain Atom a bit of a jerk to set up the theme of the episode, so he does get a bit humbled by the end. Or does he?

WF: Aquaman sings in this episode. Can you take us through his song, the assorted costumes, etc.? Will this be Aquaman’s last big moment in the series?

JT: Well the script was a bit story-lite really, and we needed to fill up some time and rather than just add another fight, our default mode is now to add a song. The song served the story purpose of defining what the episode was really about and it also provided some much needed empathy for Captain Atom as well as a chance to give some easter eggs to the fans in the know. And who better to sing a song about heroism than Aquaman? John Dimaggio was such a great singer and we love Aquaman, obviously, so Michael and I whipped up some lyrics, and our great musicians, Dynamic Music Partners, did their magic and actually made it a song and I story boarded the sequence. This was done a while after the story had been written and the majority of the show had started being storyboarded, if Im not mistaken, so we were under the gun. I designed the costumes on the board and then our character designers had the unenviable task of drawing most the different versions of Aquaman in the various costumes. But fear not, Aquaman has a few more spotlights coming up this season before were done!

WF: The JLI has made multiple appearances in the series so far. Can you run us through this team why you chose these particular cast members. And if there’s a JLI, is there also the traditional Justice League somewhere in this universe?

JT: We wanted to use roughly the same version of the JLI that was in the comics during its creation, so Fire, Ice, Martian Manhunter, Booster Gold, Blue Beetle (the current living version) and Guy Gardner were obvious choices. Michael Jelenic wanted Aquaman on the team and of course, who am I to argue with that? My only regret is not putting in a joke about Aquamans brief stint as leader of Justice League Detroit in the series somewhere. That would have been hilarious. Our continuity on this show was malleable to say the least, so Justice League International is our defacto name for any version of the League that has appeared because thats the name we had the legal right to use at the time we were producing the show. But I will say that there is no other version of Justice League operating right now besides this version. However, later on in the remaining episodes, new heroes will have joined. Also, there was never any plan of elaborating on what broke up the original League. The reality of a group splitting up just isnt that important to us. Especially given weve covered that type of story ground in our Doom Patrol episode.

WF: The episode tackles the idea of heroes with an without powers, and which are better. Care to chime in with your thoughts on this debate?

JT: I dont have any opinion either way. Theres one scene in the story early on where Captain Atom really breaks down what would really happen to a Batman in a world really populated with super powered villains and its really hilarious. I cant say I disagree with him. But this is why we love Batman because in some ways, as far as comic books go, hes the most unrealistic character of all because hes human and can be killed potentially, and yet, his brains, athletic ability, will power, wealth and gadgets keep him alive and let him win. Hes the ultimate symbol of American capitalism if you want to take it to an extreme comparison.

WF: As always, we wrap up this mini-Q & A with the same question – why should fans check out this new episode of Batman: The Brave and The Bold when it airs on the 21st?

Taking a few moments out of his busy schedule, having recently finished scoring the forthcoming Justice League: Doom animated feature – due Spring 2012 – before proceeding to his next secret project for the DC Universe Animated Original Movie line from Warner Home Video, composer Christopher Drake sat down with The World’s Finest to discuss his work on Batman: Year One. Batman: Year One, the latest animated feature release from the fan-favorite Warner Home Video line, takes place during the early days of both Lieutenant James Gordon and Batman’s respective careers. Drake discusses his influences for Batman: Year One, and how the movie itself dictated the accompanying score. Click on the image below for more. 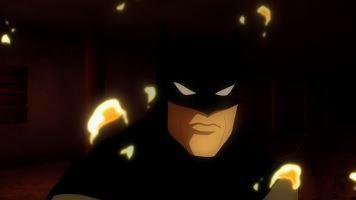 Click on the links below to discuss both the new Batman: Year One animated feature and its respective DVD and Blu-ray home video releases, along with the included DC Showcase: Catwoman animated short.

A co-production of Warner Premiere, Warner Bros. Home Entertainment Group, DC Entertainment and Warner Bros. Animation, the direct-to-video Batman: Year One animated feature is now available to own on Blu-ray disc and DVD from Warner Home Video, as well as legal download. Stay tuned for further updates here soon at The Worlds Finest.

The official trailer, along with additional press details, for the upcoming Justice League: Doom animated feature have been made available courtesy of Warner Home Video. The animated feature, due Spring 2012, features the League dealing with both a legion of enemies and a possible betrayal from within their own ranks. Click on the thumbnails to view the trailer, available in both standard definition and high-definition Quicktime. The respective trailers are labelled as such. 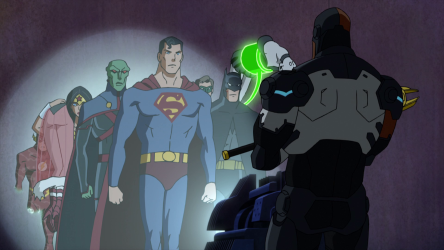 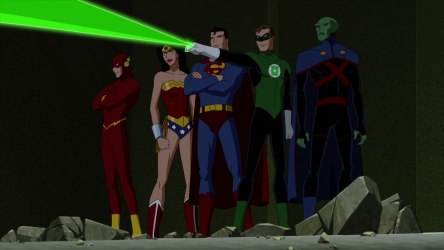 Warner Home Video has released the official trailer for Justice League: Doom, an all-new entry in the popular series of DC Universe Animated Original Movies due in early 2012 on Blu-ray, DVD, OnDemand and for Download.

Young Justice #9, the latest issue of the new DC Comics title based on the current Cartoon Network animated series of the same name, arrives in comic book and hobby stores today. This issue features scripting duties by Greg Weisman and Kevin Hopps with Christopher Jones providing the art. Weisman is one of the producers for the Young Justice animated series, and Hopps is a regular fixture of the show’s creative team. Official details for this issue are available below.

The team is taking Espionage 101 from Captain Atom. Their class project is to solve a cold case that involves a forty-year-old murder mystery, a military conspiracy and a half-decent chance that none of them will come out alive.

The cover price is $2.99US. Young Justice #9 is also available same day digitally through DC Comics and Comixology.