hosted by popgeeks.com | Roots of Dread- The Next Dead By Daylight killer is a deformed monsterHooked on You: A Dating Sim starring Dead by Daylight killers
Close
Skip to content
Menu

Cartoon Network has passed along the episode synopsis, video clips, and a collection of images from the upcoming all-new Young Justice episode “Beneath.” The new Young Justice episode is scheduled to air at 10:30am (ET/PT) on Saturday, May 26th, 2012 as part of the new DC Nation programming block on Cartoon Network. Click on the thumbnails below to view the complete library of hi-res images and Quicktime-format video clips. The official episode description is also provided below. 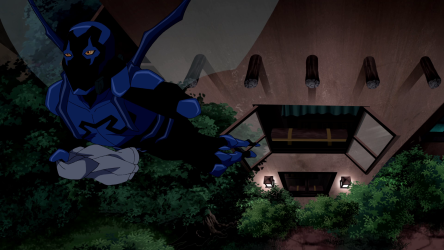 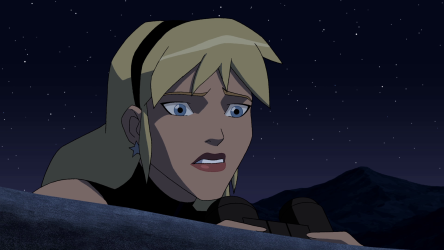 Synopsis: Jaime Reyes searches for a missing friend, while Miss Martian, Batgirl, Bumblebee and Wondergirl return to Bialya to discover what lies beneath.

Cartoon Network has also released new media for the new animated shorts set to air during the May 26th, 2012 DC Nation programming block. Continue on for videos and images from a new Super Best Friends Forever and Sword of the Atom animated shorts. The DC Nation shorts are animated shorts starring a host of different DC Comics characters in varying styles. Continue below to view the new content, the first two images leading to Quicktime-format clip and the second two to hi-res images. 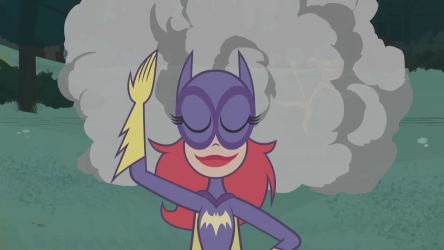 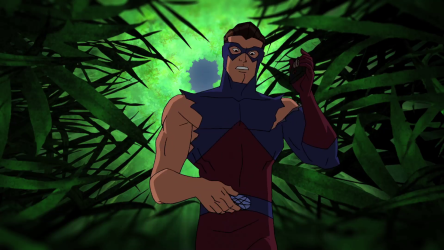 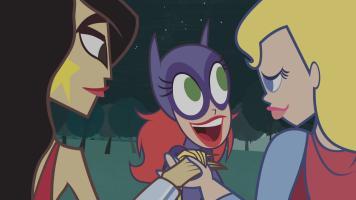 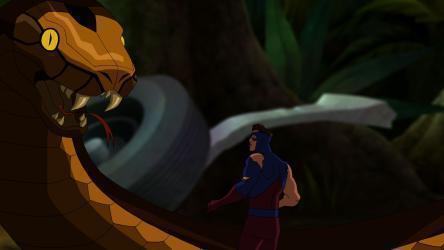 DVD Package artwork and additional details have been provided by Warner Home Video for the upcoming Superman Versus The Elite animated title, the latest release in the DC Comics Premiere Movie line. The new package artwork provides a look at the updated trade dress and a first peak at the back cover composition. Click on the thumbnail images below for a closer look.

In additional details, Warner Home Video has listed July 24th, 2012 as the official release date for the Superman Versus The Elite – Two-Disc Special Edition DVD title, six weeks after the June 12th, 2012 release of the Superman Versus The Elite on Blu-ray Combo Pack and single-disc DVD. No reason has been provided by the studio for the staggered release of the Special Edition DVD.

Check back for exclusive Superman Versus The Elite coverage right here at The World’s Finest, including interviews, reviews, and a contest opportunity. Details on the exclusive content will be released shortly.

In additional DC Comics Premiere Movie news, cast and crew details for the upcoming The Dark Knight Returns, Part One animated feature, the Fall 2012 installment in the ongoing line from Warner Home Video, has been released. Actor Peter Weller is voicing Batman/Bruce Wayne, Ariel Winter will voice Robin, Wade Williams will voice Harvey Dent/Two-Face, and Michael McKean will voice Dr. Wolper. The film is being directed by Jay Oliva from a script by Bob Goodman. The two part animated movie, the second part coming early 2013, adapts the acclaimed comic book milestone of the same name. Further updates are expected after the debut of Superman Versus The Elite.

Warner Home Video has released three new video clips and five images from the upcoming direct-to-video Superman Versus The Elite animated feature, the next installment of the DC Comics Premiere Movie ongoing series. Superman Versus The Elite – which hits Blu-ray, DVD and Download on June 12th, 2012 – adapts the acclaimed story “What’s so Funny About Truth, Justice, and the American Way?” where Superman finds himself dealing with a new team of heroes called The Elite.

The three official animated clips each feature one member of The Elite: “Coldcast,” brimming with brute electrical force; Menagerie,” a flying demon with a flair for killing; and an ever-mystical presence named “The Hat.” Continue below for the new media, with the first three thumbnails below leading to the High-Definition Quicktime videos and the remaining thumbnails to images from the animated movie. 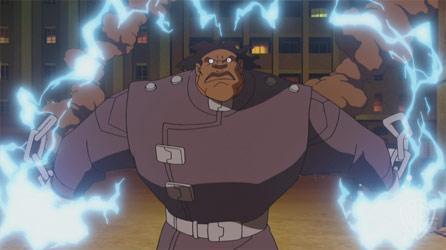 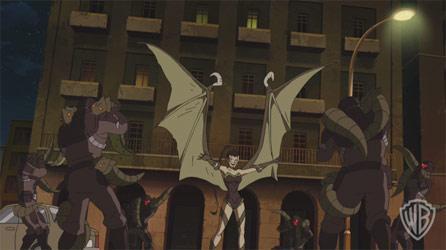 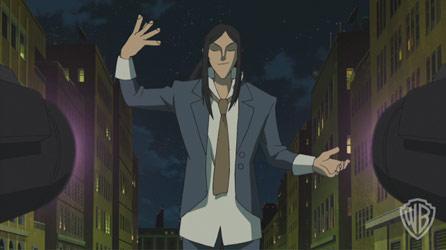 Superman vs. The Elite, a DC Comics Premiere Movie, is produced by Warner Premiere, DC Entertainment, Warner Bros. Animation and Warner Home Video. The all-new, PG-13 rated film is scripted by award-winning comics writer Joe Kelly and the story is adapted from his original 2001 DC Comics release, Whats So Funny About Truth, Justice and the American Way? The single-issue comic, Action Comics #775, was lauded by Wizard Magazine as the Greatest Superman Story of All Time, and ranked the epic tale at No. 21 on its list of the Top 100 Comics of the last 30 years.

In Superman vs. The Elite, Superman’s effectiveness as a super hero comes into question when a new group of super powerful crusaders, known as “The Elite,” appear on the scene. As super heroes, the Elite know no bounds, and are more than willing to kill, even on a massive scale, to stop villainy — putting them on a collision course with the ever-ethical, yet preferably non-lethal Man of Steel.

The film is directed by Michael Chang (Batman: Brave and the Bold). Bruce Timm (Batman: Year One) is executive producer, and Alan Burnett (Green Lantern: Emerald Knights) is producer.

Stay tuned for exclusive Superman Versus The Elite coverage right here at The World’s Finest, including interviews, reviews, and a contest opportunity. Details on the exclusive content will be released shortly.

Green Lantern: The Animated Series reaches its first season finale this weekend – Saturday, May 26th, 2012 at 10:00am (ET/PT) as part of the DC Nation programming block on Cartoon Network – with the episode “Homecoming.” The writer of the season finale episode – Green Lantern: The Animated Series producer Jim Krieg – sat down with The World’s Finest to discuss the season finale episode, the series in general, and perhaps a few secrets and surprises that viewers may not be aware of. Click on the image below to check it out. 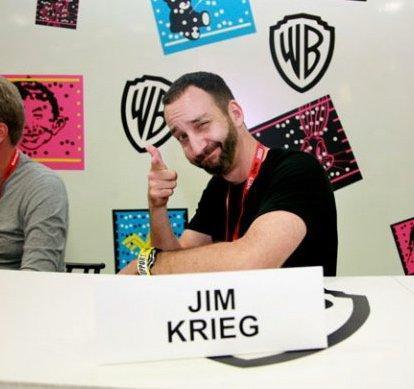 Green Lantern: The Animated Series “Homecoming” debuts 10:00am (ET/PT) on Saturday, May 26th, 2012 as part of the DC Nation programming block on Cartoon Network.

Stay tuned for further updates on Green Lantern: The Animated Series, including exclusive content and more, here soon at The World’s Finest.

New episode details, two video clips, and a collection of images have been provided by Cartoon Network from the upcoming all-new Green Lantern: The Animated Series episode “Invasion.” The new Green Lantern: The Animated Series episode is scheduled to air at 10:00am (ET/PT) on Saturday, May 19th, 2012 as part of the new DC Nation programming block on Cartoon Network. The episode continues to three-part season finale. Click on the thumbnails below to view the complete library of hi-res images and Quicktime-format video clips. The official episode description is also provided below. 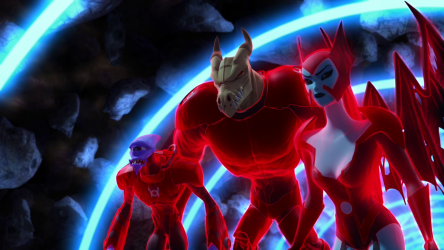 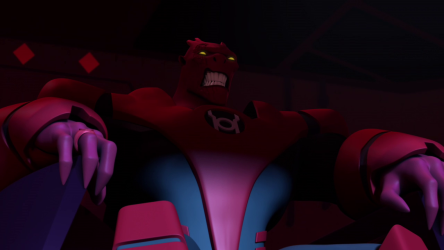 Synopsis: Hal and the Green Lanterns travel to one of the Ancient Wonders of the Galaxy the Lighthouse so they can seal off any path through The Maelstrom and prevent the Red Lantern armada from getting through. Atrocitus, the Red Lantern leader, sets a trap for Hal and manages to steal the ship so that he may finally have his vengeance on the Guardians.

The above content is also available at the The World’s Finest Green Lantern: The Animated Series subsite.