Additional details on this DVD release, first revealed at The World’s Finest, are available here.

Young Justice: Invasion – Destiny Calling: Season Two, Part One will hit shelves on January 22nd, 2013 with the suggested retail price of $19.97. The above content is also available at The World’s Finest Young Justice subsite. 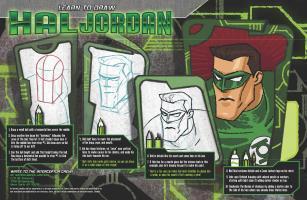 Green Lantern: The Animated Series #8, the latest issue of the comic title, is available through both comic book stores and digital outlets. The cover price is $2.99US. Click here for a preview of the issue.

Green Lantern: The Animated Series #8, the latest issue of the new ongoing DC Comics title based on the acclaimed animated series of the same name, arrives in comic book and hobby stores today. A digital copy will also be available through ComiXology and DC Comics. This issue features an all-new story by the creative team of writer Ivan Cohen and artist Luciano Vecchio. The Green Lantern: The Animated Series monthly title features stories which take place in continuity with the animated series source material. Official details for this issue are available below.

Written by: Ivan Cohen
Art by: Luciano Vecchio
• Aya’s experiment has knocked the Interceptor offline!
• Hal Jordan is stranded on a hostile planet – and his power ring is running low on energy!
• Will the change last long enough to help the Hammer Tribe defeat the Lizardriders?

Ivan Cohen will be the new ongoing writer for the series starting with issue #10, shipping January 2013.

The cover price is $2.99US. Green Lantern: The Animated Series #8 is available through both comic book stores and digital outlets.

Sales estimates for the October 2012-shipping issues of the Young Justice and Green Lantern: The Animated Series comic titles are now available. The sales numbers below are estimates based on the information provided by Diamond Comics Distributors made available earlier this month.

Green Lantern: The Animated Series #6 moved an estimated 6,515 copies to North American comic book stores during the month of October 2012. The comic title has experiencing a steady erosion of sales since its debut earlier this year, a normal occurrence for any comic title, but has now started to reach it’s level of an estimated 6,500 sales per month. Sales for Green Lantern: The Animated Series #0 – the special preview issue of the title – hit 13,600 when it first debuted.

The October 2012 issue of Young Justice, issue #21, sold an estimated 7,557 copies to comic shops in North America. The title has been experiencing a slow growth in sales from month to month for the past year, usually an addition 1% jump per issue, though the switch to the second season Young Justice: Invasion era of the animated series with issue #20 has resulted in a bigger 5% jump in comic sales. The comic experienced a small jump in sales between issue #20 and #21, of 0.5%. Please note these numbers do not take into account copies appearing on newsstands or sold digitally.

DC Comics has released comic solicitation information for the publisher’s February 2013 library of releases, including details for the latest issues of the ongoing Green Lantern: The Animated Series and Young Justice comics titles.

Written by CECIL CASTELLUCCI
Art and cover by DARIO BRIZUELA
On sale FEBRUARY 13 • 32 pg, FC, $2.99 US • RATED E
• The Interceptor needs repairs, so the crew visits a junk depot! But the asteroid’s inhabitants aren’t happy about these visitors…
• And things get even worse when more ships arrive!

More details on the new ongoing series, including interviews and production art, can be found here at The World’s Finest Green Lantern: The Animated Series subsite.

Details for the February 2013 issue of Young Justice, the DC Comics title based on the acclaimed Cartoon Network animated series of the same name, can be found below. The Young Justice comic series expands on the continuity of the hit animated series, telling stories taking place between episodes of the top-rated cartoon. Stories from both the animated series and comic title will directly tie into each other, with the comic providing more background on events happening in the animated core series. According to solicitation details, Young Justice #25 will be the final issue of the series. Cover art is also available by clicking the thumbnail.

Written by GREG WEISMAN
Art and cover by CHRISTOPHER JONES
On sale FEBRUARY 20 • 32 pg, FC, $2.99 US • RATED E
FINAL ISSUE
• The heroes make their last stand against Kylstar and Brainiac!
• Metropolis is still in danger, but now the entire planet risks destruction!
• Deadshot hits his target!

Young Justice #25 is slated to be the final issue of the comic series.

Further Young Justice comic details can be found at the The World’s Finest Young Justice subsite, including previews for current and upcoming issues along with creator interviews.