The first official clip from the upcoming Superman: Unbound animated feature has been released by Warner Home Video. Hitting home video and digital outlets on May 7th, 2013, Superman: Unbound is the latest installment of the ongoing DC Universe Animated Original Movie line. Superman: Unbound adapts the acclaimed comic storyline “Superman: Brainiac” by Geoff Johns and Gary Frank. Click on the thumbnail below to view the new clip in the High-Definition Quicktime/MP4 format. 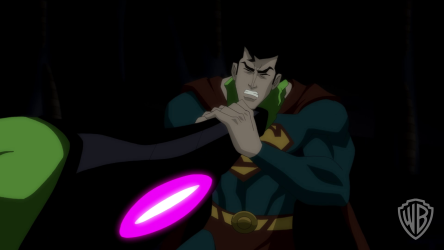 The clip features Superman’s first encounter with Brainiac, a destructive force who has been devastating planets across the galaxy – with Earth next in his sights. Matt Bomer (White Collar) provides the voice of Superman opposite John Noble (Fringe, The Lord of the Rings films) as the voice of Brainiac. The film also features the voices of Castle stars Stana Katic as Lois Lane and Molly Quinn as Supergirl.