Warner Bros. Home Entertainment has revealed the upcoming animated feature Son of Batman, the next installment in the acclaimed ongoing DC Universe Original Movie line, will be available to own May 6th, 2014. The animated feature will be released on Blu-ray Combo Pack, DVD, and for Digital Download. Son of Batman is inspired by the acclaimed Batman storyline “Batman and Son” written by Grant Morrison, wherein Batman discovers he has a son – named Damian – with Talia Al Ghul. Continue below for a first look at the Blu-ray and DVD cover artwork along with the film’s official synopsis. 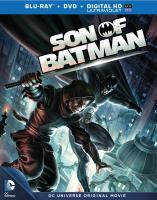 Synopsis: Batman is shocked to learn that not only does he have a son, but the boy’s mother is Talia, the daughter of the international overlord, Ra’s Al Ghul. Nevertheless, the Dark Knight and his willful boy (as the new Robin) becomes uneasy allies when Talia enlists a team of ninja man-bats on a criminal enterprise with international consequences.

The Son of Batman animated feature is slated to debut at the annual WonderCon convention over Easter Weekend 2014 in Anaheim, California. Additional details for this film are expected to be released shortly.