With the Son of Batman – Music From The DC Universe Animated Movie soundtrack release available to own on compact disc courtesy of La-La Land Records – through the label’s website and a host of online retail vendors – The World’s Finest caught up with Son of Batman composer Frederik Wiedmann to discuss his work on the recent animated feature. In the interview Weidmann covers a host of topics – including the composing process, his favorite themes, putting together a soundtrack, and much more. Click on the image below for the full interview, exclusive to The World’s Finest. 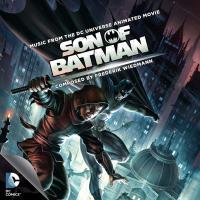 The Son of Batman – Music From The DC Universe Animated Movie soundtrack release from La-La Land Records is currently available for the retail price of $19.98. The compact disc soundtrack, available for purchase through both www.lalalandrecords.com and other soundtrack boutiques, is a limited edition of 1500 units. A separate digital download edition of the soundtrack is also available through online vendors. Click on the links below to discuss both the Son of Batman animated feature and its respective releases.

Further details and content for Son of Batman, including exclusive content and more, are available at the The World’s Finest Son of Batman subsite. Click on the links below to discuss both the new Son of Batman animated feature, its respective home video releases, and other related discussions.

Son of Batman is also being released as part of the year-long “Batman 75” celebrations, commemorating the 75th anniversary of Batman’s first comic book appearance. More details on “Batman 75” can be found here. Son of Batman is now available on Blu-ray, single-disc DVD, and Digital Download as part of the DC Universe Animated Original Movie line from Warner Bros. Home Entertainment, in co-production with Warner Bros. Animation and DC Entertainment.

The sales numbers for all six issues of the Beware The Batman comic series, which ended publication in March 2014, are now available. The comic book, from publisher DC Comics and DC Entertainment, was based on the Cartoon Network animated series of the same name. Expanding on the continuity of the Beware The Batman cartoon, the comic spotlighted Batman as he faced off against the twisted machinations of Gotham City’s criminal underworld with backup from ex-secret agent Alfred and lethal swordstress Katana. The animated series is currently airing Saturday nights at 3:00am (ET/PT) as part of the Toonami programming block on Adult Swim, recently returning to air after an extended broadcast hiatus.

Sales numbers for all six issues of the series can be found below.

After the standard second issue drop, where comic titles tend to drop between 30 – 60% of initial sales, the series fell an average of 12% per issue until its final month. Please note these numbers do not take digital or newsstand sales into account.

For comparison, the final issue of the Young Justice comic series finished with just over 7,000 units sold for issue #25. The Green Lantern: The Animated Series comic finished below 5,000 with issue #14.

Cartoon Network has announced Teen Titans Go! will move to a new night and time starting in June 2014. The action-comedy series will now air Thursdays at 6:00pm (ET/PT) starting June 5th, 2014. Teen Titans Go!, a half-hour comedy/adventure series comprised of two back-to-back 15-minute episodes, follows the hilarious antics of the teenage superhero team as they deal with what happens between major battles.

The DC Comics-inspired cartoon will air as part of the new two-hour “Fresh New Thursdays” programming block, airing every week from 6:00pm – 8:00pm (ET/PT). Other series in the block include The Amazing World of Gumball, Adventure Time and Regular Show.

To mark the wide home video release of JLA Adventures: Trapped In Time, Warner Bros. Home Entertainment has issued a new video clip for the direct-to-video original movie. The acclaimed all-ages animated movie is now available to own on DVD and HD Digital Download, and can be purchased from all retail and online outlets. JLA Adventures: Trapped In Time – a co-production between Warner Bros. Home Entertainment, DC Entertainment, and Warner Bros. Animation – features the greatest heroes of DC Comics squaring off against their most challenging and classic foes. The animated feature has received positive reviews from both fans and critics, citing a fun original story and quality animation.

Continue to the player below to view a new clip from the film.

The JLA Adventures: Trapped In Time all-ages animated feature – a co-production between Warner Bros. Home Entertainment, DC Entertainment, and Warner Bros. Animation – is now available to own on DVD and HD Digital Download at retail and digital outlets everywhere.

To discuss the original animated feature, or its DVD home entertainment release, please click on the links provided below.

Stay tuned for additional updates and details right here at The World’s Finest.

ORDER “SON OF BATMAN: LIMITED EDITION” on 6/20 starting at 12pm (PST) at www.lalalandrecords.com and get yours autographed by composer Frederik Wiedmann at no additional charge. Autographs are available while supplies last and are NOT guaranteed.

La-La Land Records and Warner Bros. Animation proudly present the original score to the all-new DC Universe Animated Movie SON OF BATMAN. Acclaimed composer Frederik Wiedmann (GREEN LANTERN THE ANIMATED SERIES, JUSTICE LEAGUE: THE FLASHPOINT PARADOX) finds the perfect pitch for the Caped Crusader with a vigorous orchestral score that chronicles Batman’s fight against Gotham crime with his son Damian (the new Robin). Wiedmann expertly mines both sides of Batman, musically capturing the complex character’s heroic feats as well as his dark, conflicted psyche. Produced by the composer and MV Gerhard, and mastered by James Nelson, this limited edition of 1500 units contains two exclusive tracks not available on the digital download version. The CD booklet is infused with great pics and includes brief comments from the composer and the film’s animation director. The Gotham-infused art design is by Dan Goldwasser.

Stay tuned to The World’s Finest for a new interview with Weidmann discussing his work on Son of Batman and other projects.

Additional soundtrack releases based on animated series inspired by DC Comics characters are expected to be released later this year, including Batman: The Animated Series – Volume Three coming Summer 2014 from La-La Land Records. Details will be available soon.

Further details and content for Son of Batman, including exclusive content and more, are also available at the The World’s Finest Son of Batman subsite. Click on the links below to discuss both the new Son of Batman animated feature, its respective home video releases, and other related discussions.

Discuss the Son of Batman soundtrack on The DC Animation Forum!