Aquaman: King of Atlantis begins with Aquaman starting his first day on the job as king of Atlantis – and he’s got a lot of catching up to do. Luckily, he has his two royal advisors to back him up: the scholar Vulko, and Mera, the water controlling warrior princess. Between dealing with unscrupulous surface dwellers, elder evils from beyond time and his own half-brother who wants to overthrow him, Aquaman must rise to the challenge and prove to his subjects – and to himself – that he’s the true heir to the throne, and holder of the trident!

Aquaman: King of Atlantis isn’t the Aquaman-centric cartoon that fans were likely asking for but, if you’re willing to go into with an open mind, prepare to have a total blast! Fun and entertaining, Aquaman: King of Atlantis builds off it’s movie-inspired roots for a surprising and sharply cast animated adventure that should work for fans of all ages.

Aquaman finds himself as the ruler of the seas in Aquaman: King of Atlantis, but it’s not the easiest job! The fate of Aquaman’s people, his home, and the entire world is in his hands. With monstrous creatures, devious foes, and epic battles, get ready for this underwater adventure!

Out of the gate, it’s clear to see this show hearkens to the recent James Wan Aquaman movie by basically picking things up roughly where the movie’s plot ends. Here our hero is still dealing with the Ocean Master and his upbringing – being raised by Tom Curry at Amnesty Bay  – all the while learning to be a new ruler for an ancient civilization. Everything here just seems more heightened and exaggerated than what we’re used to when it comes to an animated super hero series, but it’s still entertaining, even if this show’s brand of humor can be a bit of an adjustment. It does grow on you, though.

And yes, we get the “talking to fish” jokes, too (they even make it a song out of it)!

The casting is sharp, too. Cooper Andres as Aquaman brings a lot of heft to the role, and is having a blast, clearly, plus he happens to sound surprisingly similar to Jason Momoa. Dana Snyder cast as Ocean Master is hilarious, giving the character an annoying edge that’s successfully played up for laughs. Gillian Jacobs’ excitable, go-getter tough take on Mera also ends up being the perfect foil to the more diplomatic Aquaman here.

While this show is a comedy through-and-through, it doesn’t lack for action nor for good character work. There’s some surprisingly nuanced moments to be found here and there, buried under the cartoon’s amplified antics. Also, the cartoon manages to surprise in other ways, such as turning what could’ve been a major power move by the Ocean Master into more of a comedic moment, and it works! 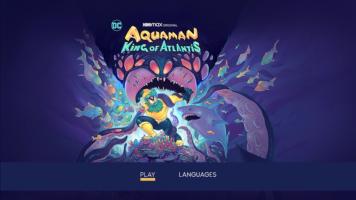 Speaking of, there’s a host of great visual and background gags throughout the show, ranging from humorous background characters to running gags, like how uncomfortable the throne of Atlantis is (though that joke is more a metaphor for Arthur’s difficulty in fitting into the role of king). Still, that leads to even more great comedic bits, like how the throne becomes an almost revolving door and how constantly fickle Atlanteans are with their ruler. In fact, the citizens of Atlantis are a consistent source of comedy throughout (and them not believing space is real is a hilarious and smart bit of writing).

On top of the smart gags and strong bits of character work, Aquaman: King of Atlantis does pull off some nifty surprises for long-time fans, too. There are more than a few great callbacks and some nice pulls from the character’s comic history, including foes like the Fisherman popping up (here given an eerie twist). There’s even a new foe named Primordeus causes a few waves for Aquaman and his crew.

It’s likely nowhere near what most expected or wanted from an Aquaman animated series, but the end product here ends up being a blast partly because of the risky approach they take to the series. A goofy action-comedy? Given how fickle fans can be about their favorite characters, it’s a bold risk, but it’s a risk that ultimately works and will very likely catch on with a lot of younger viewers, given how similar it is to some of Cartoon Network’s recent output. While many likely won’t give it a spin based solely on the show’s visuals alone, it’s worth taking a chance on.

What’s on the DVD? Well, just Aquaman: King of Atlantis and that’s it. No special features. No trailers, no anything else, it’s as bare bones as possible. For a standard definition release, Aquaman: King of Atlantis looks and sounds good, but it’s disappointing knowing there should be a better physical edition available to match with the high-definition digital release.

An unconventional take on the classic DC Comics hero, and a fun spin off of said character’s recent live-action movie, Aquaman: King of Atlantis is a weird and wacky blast, but one that might not appeal to all of the Aquatic Ace’s fans. In the end, it’s still worth checking out and will probably end up winning over more than a few thanks to his charm and humor. However, it’s a shame that Aquaman: King of Atlantis is getting just a DVD physical media release and no Blu-ray. For those interested in the best possible presentation, pick up the digital release or catch it on HBO Max. Recommended, but with reservations.

Thanks to Matthew Woodley for contributing to this review!

Please note a DVD copy of Aquaman: King of Atlantis was provided by Warner Bros. Home Entertainment for the purpose of this review.