Description: Step back into the Gotham of Tim Burton’s seminal Batman movies! Batman ’89 brings in screenwriter Sam Hamm (Batman, Batman Returns) and artist Joe Quinones (Dial H for Hero) to pull on a number of threads left dangling by the prolific director!

Gotham becomes torn in two as citizens dressed as Batman and The Joker duke it out in the streets. As D.A. Harvey Dent tries to keep the city together, he targets the one problem tearing it apart: Batman! But what happens next has dark ramifications for not just the Dark Knight, but Harvey Dent himself. Bruce Wayne embarks on a crusade to better Gotham as both himself and the Batman, but a young new hero on the scene stands in his way, claiming his mission is shortsighted. Meanwhile, Harvey Dent starts down a path leading to nothing but ruin. The fate of Gotham hangs in the balance as these two sides of the same coin do battle. But when the coin finally flips, on which side will it fall? 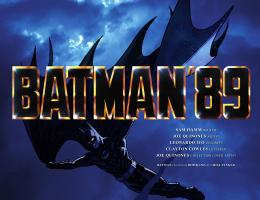 Successfully capturing the distinct look and feel of director Tim Burton’s iconic Batman movies, Batman ’89 is not only a welcome return to that beloved cinematic world, but also a beautifully-rendered one which takes these characters down some unexpected avenues. Taking place after Batman and Batman Returns, Gotham City finds itself again going through tough times, and D.A. Harvey Dent aims to solve the burg’s woes. Unfortunately, things go sideways pretty fast, as they tend to, and the result is a legitimate albeit imperfect page-turner that fans should find ultimately satisfying.

Batman ’89 brings back Batman and Batman Returns screenwriter Sam Hamm, partnering him with the exceptionally talented Joe Quinones and essentially picking things up where he left off over thirty years ago. Gotham City is in chaos, with citizens dressed as Batman and the Joker waging war in the streets. To further complicate matters, a young new red-breasted hero starts popping up on the scene, along with whispers that a certain feline felon has returned. As Batman and Dent both set out to fix their beloved city, neither man can predict how their respective plans will change Gotham forever.

Out of the gate, however you thought Burton’s third Batman movie would’ve played out, it’s nothing like what you’ll find in Batman ’89. Hamm makes a wealth of surprising choices that takes this world in some pretty unexpected directions, though one that still feels on point for this take on the Dark Knight (with the debatable exception of Catwoman). While we do get to see Burton’s Harvey Dent –  “played” again here by Billy Dee Williams as he was in Batman – head down that familiar tragic path, the circumstances this time out are pretty novel, and his motivation ultimately redemptive, giving this take a little more grey and depth than expected (though that makes sense given how Burton’s film’s focused more on the “villains”). Dent’s tale here also serves as an interesting counterpoint to Bruce Wayne’s, here now questioning his effectiveness as Batman given Gotham’s decaying state and considering his next move.

While Batman ’89 continues to lean on the “dark fantasy” tone from Burton’s two Batman films, and picking up a plot thread or two from those movies, it also attempts to tackle some pretty big issues. Racism and bigotry, political corruption and the importance of social justice are all themes explored here, though it’s occasionally a little ham-fisted. The respective storylines for Harvey Dent, Robin and Catwoman all touch upon these themes, with Batman similarly impacted. Dent finds his political beliefs in turmoil, Robin struggles on how to help his community, and even Catwoman draws attention to the growing divide between the rich and the poor. It’s an interesting approach by Hamm that, save for the odd bit of clumsiness, he manages to pull off quite well, though the comic’s six-issue run seems a tad too short to adequately dive into every topic he wants to cover.

Hamm’s script also tends to be a little dialogue-heavy at times, which can occasionally slow down some of the book’s biggest moments and drag out others. He still nails the “voice” of these characters almost 30 years later, for the most part, they’re just a little more verbose than what we’ve seen in Batman and Batman Returns.

Along those lines, Batman ’89 occasionally struggles with a problem that’s unfortunately none of its own doing. While the comic book does an excellent job at returning the reader back to Burton’s world, the 30-year gap between Batman Returns and Batman ’89 brings about some fresh perspectives and subject matter that wouldn’t have been present if this story was actually written and released around the same time as Burton’s two films (ie: the mid-1990s). As a result, there’s occasional bits of dialogue, locations or plot devices that feel a little jarring, out of place, or just ring false to the world established in Batman. For example, Burnside is a recent addition to Gotham City’s map, created in 2014 and over 20 years after Batman Returns, but it’s central to Batman ’89‘s plot. Yes, this is an extremely specific and weird nitpick, but it still sticks out, especially for those knowledgeable of Batman’s comic book history. Again, a very specific nitpick.

And, to step back and look at it, Batman ’89 is definitely a bit more “serious” when compared to Batman and Batman Returns, but that’s not a bad thing. These moments add some much-needed substance to this flashy tale and help some of the more disparate elements of the script click into place. There’s still plenty of action and humor here, including some great jaw-dropping set pieces and laugh out loud jokes, which keeps things playful amidst the heavy subject matter and dark tone.

Helping Hamm on this return trip to Burton’s Gotham City is acclaimed artist Joe Quinones, who successfully revives the gothic look of Batman and Batman Returns while adding a few touches of his own. Characters legitimately look as though they’ve stepped off the big screen, but with slight changes and tweaks, usually for plot-related purposes. Bruce Wayne appropriately resembles actor Michael Keaton, and so on and so forth for most of the cast, though there’s clearly a character or two here where exact- or near-likenesses to their respective actors were not allowed.

Quinones’ style also adds a bit of an “animated” touch to Tim Burton’s Batman design sensibilities. Clearly a fan of Batman: The Animated Series, backgrounds occasionally look like a mish-mash of Burton and Bruce Timm’s respective styles, combining gothic with dark deco and coming out absolutely gorgeous. It’s not an exact reproduction of the movie’s aesthetics here, but it’s still respectful to and resembles the source material. In fact, this book is packed with nods to not just the animated series, but Batman’s long comic history as well (such as Batman’s infamous giant penny, among others). Action scenes in Batman ’89 are also especially kinetic under Quinones pencils, adding a little extra flare and style to the fisticuffs, but quieter moments also manage to hit their mark. Quinones’ love for these characters is apparent in every panel.

Batman ’89 also adds a few new characters to the world of Burton’s Batman. On top of the introduction of Robin, here a resident of Burnside named Drake Winston, Harvey Bullock and Barbara Gordon are among the new faces in Gotham City. Barbara plays a key role in Batman ’89‘s story, here as a police sergeant who’s also dating Dent. Quinones’ skilled design work makes every new character fit effortlessly in Burton’s playground. And if it’s not clear yet, yes, Batman ’89 ignores Batman Forever and Batman & Robin.

Still, there are plenty of Easter Eggs to Batman’s assorted media history here in Batman ’89, and it’s not limited to just Burton’s movies. Keep an eye out for a wealth of great background gags and cameos peppered throughout, as well as some great smile-inducing homages. It’s also worth noting there’s an absolutely awesome Easter Egg under the hardcover collection’s dust-jacket that’s easily one of the coolest things DC Comics’ ever done (images below). This especially cool treat can also be found in the Superman ’78 hardcover collection.

Overall, Batman ’89 is an ambitious and ultimately successful return to Tim Burton’s Gotham City. It’s an extremely well thought-out story that advances this world in some pretty exciting ways, even if some aspects of Hamm’s plot and writing fall a little flat. Thankfully, the sharp artwork by Quinones helps wash over some of those shortcomings and even keeps things rolling through some of the book’s slower moments. This may not be the story fans expect, but Batman ’89 never-the-less delivers a worthy successor to Batman and Batman Returns.

Batman ’89 is well worth the wait, and keeps the twists and surprises coming fast, even if the story occasionally hits a bump or two along the way. Still, the lush art and interesting developments help pave over any of the story’s cracks, resulting in a thoroughly fun, enjoyable and satisfying read that fans should definitely seek out. It might not be what every fan’s expecting, but it’s a welcome addition to the mythos and, ideally, it’s just the beginning. Batman ’89 comes Highly Recommended!

Batman ’89 is available now for purchase in both print and digital formats, available as six single issues or as a collected edition, all from DC Comics. Discuss this review here!