Batman: Death In The Family

WHICH PATH TO JUSTICE WILL YOU CHOOSE?

The interactive Blu-ray presentation offers many different ways for viewers to tell the Batman: Death in the Family story, with numerous twists and turns in the middle, and several possible endings. The choices along the way put greater weight on the viewers’ decisions and result in even stronger stories. Viewers can also choose to allow the story to tell itself, as there is an option to let the Blu-ray decide its own path. Packed with Easter Eggs, the centerpiece short’s story – with its foundation grounded in the original Batman: A Death in the Family comic run, and the acclaimed Batman: Under the Red Hood animated film – balances a number of integral themes within its entertainment, including fatherhood, mental health, death, rebirth, revenge and redemption. Along the route, viewers encounter new, surprising looks at some classic DC characters.

“From the very first navigation card, we wanted to give the audience an impression of what they’re getting into, but then also give them something unexpected – maybe even something they’ll regret, so they have to think twice about every future choice they make,” Vietti explains. “Branched storytelling has to be stronger than just the gimmick of the choices – it has to be rewarding and offer new and worthwhile insights into the characters. It needs to involve you, and keep you searching for the next twist. So we sought to subvert expectations and do something very different.”inment Senior Vice President, Originals, Animation and Family Marketing. “This incredible thrill-ride takes us to the edge of the DC universe and sets the stage for an exciting new chapter.”

Want to know how this all started? 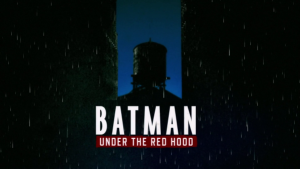