Batman: The Definitive History of the Dark Knight in Comics, Film, and Beyond

THE WORLD’S FINEST – RELEASES & REVIEWS – FORUM
Batman: The Definitive History of the Dark Knight in Comics, Film, and Beyond
Publisher: Insight Editions
Release Date – Oct. 29, 2019
Since his 1939 debut in the pages of Detective Comics, Batman has become an icon, instantly recognizable the world over. Through the years, Gotham City’s guardian has been interpreted in so many radically different ways that we all now have our own Batman. To some, he’s the colorful Caped Crusader who dispatches villains with a POW! To others, he’s the grim Dark Knight hell-bent on avenging the death of his parents. And to others still he’s made of LEGO, has great abs and likes to eat lobster thermidor!

In celebration of the Dark Knight’s 80th Anniversary, this deluxe volume tells the complete story of Batman and the many forms he’s taken across comics, TV, animation, film, video games and beyond, to present a compelling portrait of one of the most recognizable and versatile characters in the history of fiction. Covering the complete history of Batman in vivid detail, the book features exclusive commentary from the key creatives who have been instrumental in building the Dark Knight’s ongoing legacy, including Neal Adams, Tim Burton, Paul Dini, Steve Englehart, Mark Hamill, Grant Morrison, Julie Newmar, Christopher Nolan, Denny O’Neil, Joel Schumacher, Scott Snyder and Zack Snyder.

Along with taking readers on an unparalleled journey into the creation of the most memorable Batman moments in the character’s eighty-year history—from the “Knightfall” comics arc to Tim Burton’s films and the Arkham video game series—the book offers incomparable access to the DC and Warner Bros. archives to deliver an avalanche of never-before-seen visual treasures that are guaranteed to blow the minds of Batman fans everywhere.

This book contains new writing and never-before-seen content, including a foreword by Michael Keaton, a preface from Dennis O’Neil, an introduction by Kevin Conroy, never-before-seen photography and concept art, along with sketches, animation cels, storyboards and much more! Filled with exclusive insert items, Batman: The Definitive History of the Dark Knight in Comics, Film, and Beyond, is the ultimate exploration of a true legend whose impact on our culture has no limits.

Batman: The Definitive History of the Dark Knight in Comics, Film, and Beyond
By James Harvey

Written by Andrew Farago and Gina McYntir, Batman: The Definitive History of The Dark Knight In Comics, Film & Beyond not only delivers on the lofty premise of its title, but actually exceeds expectations. Not every era or iteration gets the same amount of coverage, but the authors offer up an commendable balance of the bigger events coupled with some of the more lesser-known happenings of the Caped Crusader. The book is split into chapters covering either a specific spin or time period of The Dark Knight, and is laid out in a mostly chronological order, though some chapters focusing on a specific aspect of Batman’s history cause the book to slightly jump around (the Tim Burton/Joel Schumacher content, for example). There’s a wealth of knowledge on display here, and it’s a safe bet most readers will be hit with a fair amount of new details from Batman’s assorted multi-media career.

While the book does cover the different cowls Batman has worn over the decades, the character’s four-color origins remain the base for this tome, which serves as a nice connective tissue throughout. Even though the book does end on some of the character’s more recent interpretations (Gotham, the DC Extended Universe), Batman: The Definitive History of The Dark Knight In Comics, Film & Beyond never forgets where this all began. What’s impressive about this book is how, given the 80 years covered here, not only is the coverage balanced, but it’s easy to digest and never over-whelming. There’s a clear appreciation for the character here, so the book never feels like a history lesson but instead a testament to the icon’s incredible cultural impact. It’s an engaging read no matter how familiar one may be with Batman, which is commendable given the 400-ish page count.

Every era of Batman, on the page or otherwise, is given its proper due here. Whether it’s the dark avenger from the 1930s, the upbeat super-hero from the 1960s, the established vigilante of the 1980s and 1990s, up to the refreshed, rebirth-ed armored crime-fighter of today, all of the character’s different portrayals are laid out and, especially in the context of a book such as this, it’s fascinating to see how the character has evolved over the years. His assorted comics over the decades – Batman and Detective Comics, along with his assorted spin-off books and team titles – get plenty of ink, as do key storylines from throughout the years (think “Death in the Family,” “Knightfall,” “The Court of Owls,” “The Dark Knight Returns,” “The Killing Joke,”No Man’s Land,” and so on). Looking at all these events captured and broken down in one book makes you appreciate just how many changes and events Batman has endured during his publishing history. Naturally, given how big some of these events are, be it in terms of storytelling or the impact on Batman’s pop culture status, some do get dedicated chapters (like The Dark Knight Returns), while other are grouped together primarily on their placement in the timeline (Tim Burton’s Batman gets a chapter to itself, for example, and rightfully so, as does Batman: The Animated Series). 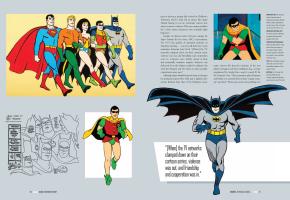 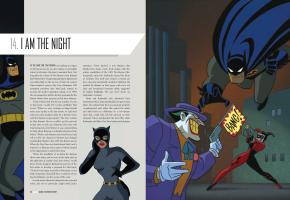 That said, there’s a notable lack of coverage concerning all the action figures and similar collectibles that Batman has inspired over the year. An odd oversight, but by no means is it a major blow to the book, just unfortunate (though likely with a legitimate reason why).

For what’s included, nearly all of it is supported with a wealth of supplemental materials and inserts. Batman’s introductory story in Detective Comics #27 is reprinted here in a slightly larger than standard comic trim size insert, and it looks great. To offer a small taste, the book also offers up the 1950s Batmobile schematics, select storyboards from the Batman-centric The Super Powers Team: Galactic Guardians episode “The Fear,” Batman: Year One script pages, character designs from the movies, and much more. There’s behind-the-scenes photos, character and costume designs, storyboards, sketches and much much more. There’s one particular insert at the very end of the book that is cool, so neat, that I don’t want to spoil it here. And all of this is on top of a cool foreword by Michael Keaton, a history-laden preface by Dennis O’Neil and a wonderful introduction by Kevin Conroy (coupled with a fantastic full-page splash of the Dark Knight from Batman: The Animated Series). They’re all extremely well-written and the perfect way to set the tone of this massive tome.

All this incredible content is housed in an attractive, and surprisingly heavy, oversized package. It’s a big, weighty book, make no mistake, but it’s thankfully binded in a way that doesn’t make it cumbersome or awkward to read. It lays out flat and is easy to flip through. The overall design of the book too is attractive, with simple, themed page layouts and some fantastic cover artwork by John Guydos that succinctly encapsulates the Dark Knight’s history across page and screen. The comic book version of Batman appropriately looms over all the different media interpretations that have sprung forth since Detective Comics #27. It’s admittedly cool to see all these different versions of Batman share the same cover.

Like the cover, the book essentially tells Batman’s story throughout the decades both on the page and in the real world. Batman: The Definitive History of The Dark Knight In Comics, Film & Beyond takes us from his early, scrappy beginnings to his current status as an icon known around the world, and it makes for an interesting and at-times fascinating read. To watch the character evolve throughout the decades is engaging and, even if we know where this journey may (hopefully) never end, it’s still a page-turner. There’s a level of respect on display here by the authors, who make sure that nearly every aspect of the character’s legacy is given it’s due. Even some of the lesser moments are given their due in a way that isn’t disrespectful or mocking, which is a testament to Farago and McYntir’s thoughtful approach to the material.

A massive love letter to Batman’s 80-year history, both on and off the page,Batman: The Definitive History of The Dark Knight In Comics, Film & Beyond is an impressive release from Insight Editions. Everything about this book, from the content within to its overall design and presentation, is top-notch. Not only is it a book that every Batman fan should add to their collection, but for those new to the character, it’s an incredible summation of the Dark Knight’s first 80 years. And, equally important, it’s just as well-written as it is meticulously researched. There’s an undeniable flow from paragraph to paragraph that makes this book nearly impossible to put it down, even with it clocking in at around 400 pages. Even at the suggested retail price of $75, this book is worth every penny (and it’s the ideal gift for yourself or for the Bat-fan in your life). No question about it, this is a book needs to be in your collection. Batman: The Definitive History of The Dark Knight In Comics, Film & Beyond is a Must Own! 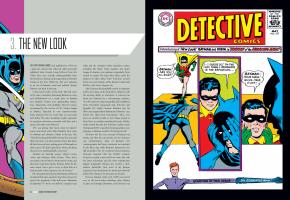 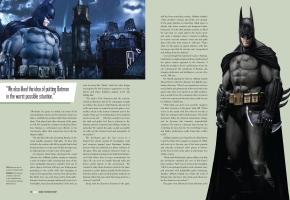 Please note that while Insight Editions provided a copy of this book for review, that did not impact or influence the product’s final assessment.