Batman vs. Teenage Mutant Ninja Turtles Enhanced Content
Ultra HD Blu-ray Combo Pack, Blu-ray Combo Pack and Digital
-Cowabunga, Batman! When Comic Worlds Collide (Featurette)– Super hero crossovers have inspired some of the most unique comics of all time. Explore the concept of the crossover, and see the creativity that ensues when the worlds of Batman and the Teenage Mutant Ninja Turtles meet.
-Fight Night in Gotham (Featurette) – DC animated movies have continued to push the realism of hand-to-hand combat on-screen. Take an exciting look at both Batman’s and the Ninja Turtles’ fighting styles, and how the creators make it feel like you’re in the fight!
-A Sneak Peek at the next DC Universe Movie, Batman: Hush – An advance look at the next animated film in the popular DC Universe Movies collection. 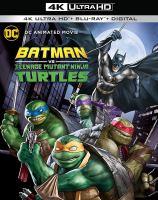 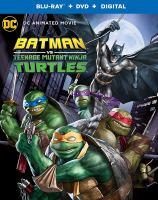 Warner Bros. Home Entertainment has rolled out Batman vs. Teenage Mutant Ninja Turtles in a wealth of home media formats, including Digital and 4K UltraHD Blu-ray, Blu-ray and DVD. Please note that Walmart will exclusively sell the DVD release of the DC Animated Movie. With a solid audio and video presentation and some added bonus featurettes, it’s another worthwhile package that doesn’t exceed really exceed expectations, but that’s not a bad thing.

Looking at the audio and video presentation, Warner Bros. Home Entertainment once again manages to deliver the goods, even if they’re not entirely perfect. The video transfer on the 4K Ultra HD Blu-ray edition is fantastic. The colors pop and the blacks are deep as deep as you’d expect for an Ultra HD title. Everything is vivid and distinct, with only a minimal amount of color banding and artifacting noticeable, though this issue seems to be due to the source and not the actual presentation. All told, the movie looks fantastic and sounds equally excellent. The 5.1 DTS-HD audio transfer sounds great, though it doesn’t really go beyond being adequate. That said, the action sequences tend to have a little extra bass to them to give them an extra punch. Quieter moments and dialogue is crystal clear from start to finish, making for a nicely balanced presentation.

Moving on to the special features, Batman vs. Teenage Mutant Ninja Turtles includes two new featurettes. The first, “Cowabunga, Batman! When Comic Worlds Collide,” runs around 12 minutes and features the creative talent discussing their fondness for Batman and the Ninja Turtles, why the two worlds work together and sprinkle in little tidbits of information about the film’s production (Director Jake Castorena also mentions the epic Batman vs. Predator 1990s comic mini-series, which now has me hoping for an animated adaption somewhere down the road). The creative team was clearly passionate about this movie and it shows. The other featurette, “Fight Night in Gotham,” dives into the choreography of the film’s action sequences and where the creative team drew inspiration from. Everything from 1970s martial arts movies to films from the 1980s to Shaw Brothers Studios features and YouTube videos were used to give each action scene an extra punch. The roughly 18-minute featurette offers up a heavy helping of production art and storyboards, too. It’s a very, very cool featurette that is well worth your time.

Overall, Warner Bros. Home Entertainment has put together a solid release for Batman vs. Teenage Mutant Ninja Turtles, though one that doesn’t offer up any real surprises. Keep in mind, this isn’t a bad thing. The featurettes, while amounting to just over 30 minutes of new content, are informative, enjoyable and well worth a watch. The studio also deserves credit for giving the Turtles just as much attention here as they do The Caped Crusader, especially considering the Half-Shell heroes are owned by Nickelodeon. Fans of either properties won’t be disappointed by the extras, and the same can be said about the film’s overall presentation. The 4K Ultra HD Blu-ray is easily the superior edition, but the regular Blu-ray and iTunes also serve as suitable alternatives. Recommended to Own!

[ Continue on to the Batman vs. Teenage Mutant Ninja Turtles Feature review ]