Birds of Prey (and the Fantabulous Emancipation of One Harley Quinn)

BIRDS OF PREY (AND THE FANTABULOUS EMANCIPATION OF ONE HARLEY QUINN)

Description: You ever hear the one about the cop, the songbird, the psycho and the mafia princess? Birds of Prey (And the Fantabulous Emancipation of One Harley Quinn) is a twisted tale told by Harley herself, as only Harley can tell it. When Gotham’s most nefariously narcissistic villain, Roman Sionis, and his zealous right-hand, Zsasz, put a target on a young girl named Cass, the city is turned upside down looking for her. Harley, Huntress, Black Canary and Renee Montoya’s paths collide, and the unlikely foursome have no choice but to team up to take Roman down.

Directed by Cathy Yan (Dead Pigs) from a script by Christina Hodson (Bumblebee), the film is based on characters from DC. Robbie also produced, alongside Bryan Unkeless and Sue Kroll. The film’s executive producers are Walter Hamada, Galen Vaisman, Geoff Johns, Hans Ritter and David Ayer.

Joining Yan behind the scenes was a creative team comprised of director of photography Matthew Libatique (A Star Is Born, Venom); production designer K.K. Barrett (Her); editor Jay Cassidy (American Hustle, Silver Linings Playbook) and editor Evan Schiff (John Wick Chapters 2 & 3); and costume designer Erin Benach (A Star Is Born). The music is by Daniel Pemberton (Spider-Man: Into the Spider-Verse). 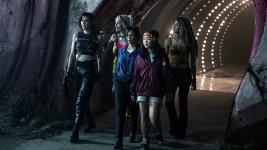 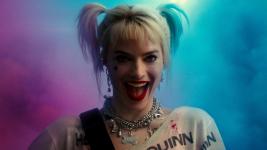 What’s the plot? Well, it’s open season on Harley Quinn (Margot Robbie, reprising her Suicide Squad role) after she publicly declares that she and The Joker are over. The Maid of Mischief quickly finds herself the target of nearly every person she’s ever wronged, including Black Mask (Ewan McGregor), who also happens to be after a data-encoded diamond to expand his criminal empire in Gotham City. As a result, Harley eventually finds herself teaming up with the likes of Black Canary, The Huntress and Detective Renee Montoya to put an end to Mask.

The story, with Harley herself serving as narrator, is fairly straightforward, but how the film tells its tale is anything but. Birds of Prey is a visual sugar rush, and every frame of feels true to how Harley would recount her tale of breaking free from The Clown Prince of Crime. Littered with slick set pieces, Birds of Prey jumps around from story beat to story beat, sometimes out of order, all the while the screen is filled with eye-popping colors, a wealth of glitter and hilarious info dumps. This is all preceded by the film’s beautifully animated opening sequence, which features the work of artist Shane Glines (Justice League Action, Beware The Batman). It’s a riot of a roller coaster ride, with the film’s 109 minute runtime zipping by at a brisk pace.

Heavily influenced by Amanda Conner and Jimmy Palmiotti’s acclaimed run on the Harley Quinn comic series, along with a dash of Batman: The Animated Series for good measure, Birds Of Prey offers a layered and surprisingly complex portrayal of Gotham’s Queenpin of Crime. Superbly guided by director Cathy Yan, the script by Christina Hudson shows us a Harley Quinn relatably yearning to strike out and create her own identity, which Robbie expertly conveys. Her care for the character is apparent, and that bleeds into her performance. There’s a lot of subtly and character work in Robbie’s portrayal that’s easy to overlook – especially given the loud, wacky tone of the movie – but it’s all there. Outside of the DC Animated Universe from whence she came, Birds of Prey gives us arguably one of the most nuanced depictions of the Maid of Mischief. It’s a compelling look at a character striving (in the best way she knows how) to find herself, she just happens to have a few personal obstacles (and a wealth of murderous crooks on her tail) to overcome first.

As she slips deeper and deeper into trouble, Harley brings together a band of misfits (mostly by happenstance) to take a final stand against Black Mask’s and his goons. This makeshift band of heroes consists of characters that regular comic readers should be quite familiar with, including Black Canary (Jurnee Smollett-Bell), Det. Renee Montoya (Rosie Perez), and Huntress (Mary Elizabeth Winstead), all of whom are superbly cast and work off each other beautifully. Out of the gate, Winstead’s Huntress is an absolute scene-stealer, despite her limited screen time (give Huntress a movie A.S.A.P., please), but her fellow crime-busting companions are no slouches, either. Smollett-Bell gives Black Canary a cool, bad-ass edge, while Perez’s Montoya struggles to be the effective crime-fighter than her job as a police detective keeps denying her. These characters grow on you so quickly that you’ll wish Birds of Prey leaned a little more on its undeniable group chemistry (one of the film’s sweetest moments is a mid-fight hair-tie exchange between Harley and Canary). That said, it’s ultimately the right choice to hold off on getting the gang together, as it makes that actual moment later in the film much more crowd-pleasing. 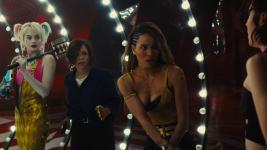 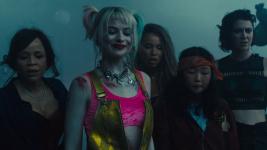 Now, that moment in question comes as our motley crew finally faces off against Roman Sionis, aka Black Mask. Played by McGregor (of Star Wars fame), the actor is clearly a ball playing the film’s hypnotically twisted and volatile antagonist, chewing every last bit of scenery with such commitment that you can’t help but be little charmed. There’s a sense of danger about Black Mask that, even during his most ridiculous moments, he still feels like a viable threat. He comes off as an unpredictably terrifying foe, toying and manipulating those around him with ease, but quickly lashing out when someone steps even the slightest out of line. And by his side is loyal henchmen/maybe boyfriend Victor Zsasz, played by Chris Messina, who’s single-minded drive and devotion to his boss creates this sense of dread and unease that’s impossible to shake, regardless of the scene. These two together make for a legitimately nightmarish threat.

While this is Harley’s story through and through, the film’s plot is primarily driven by one Cassandra Cain (Ella Jay Basco), who’s in possession of the previously mentioned data-encoded diamond. Birds of Prey‘s take on Cain strays quite a bit from the source material but, honestly, it works for what the movie sets out to do. She ends up being a great sidekick/apprentice to Harley, and the two make for a delightful duo, which allows for some solid character work and development between the two. Still, it’s understandable to be let down by Cain’s depiction here, given her background as a mute assassin-turned-Batgirl in the four-color source material.

Despite a deviation or two made when adapting the material from page to screen, Birds of Prey does the source material justice. With the exception of Cain (again, not necessarily a bad thing here), the characters here feel true to their respective four-color counterparts. It’s obvious the film’s creative team took great strides to ensure that, whether it’s on the big screen or on the printed page, they’re still cut from the same cloth. That effort pays off especially handsome for Black Canary and Huntress, as some of their key emotional beats hit that much harder if you’re familiar with their respective comic book origins.

Birds of Prey‘s fight choreography, costuming and score also deserve some recognition. The action is gritty, visceral and considerably down-to-earth when compared to most other comic book-based features, giving them that extra punch (pun intended) and absolutely earning the film’s R-rating. The film’s use of props, along with practical stunts and in-frame action, also add a bit of a kick (ditto). Black Canary gets to show off her slick moves while saving Harley from some ne’er-do-wells in one of the movie’s best beats. These sequences are supported not only by some creative costuming and set design work, especially during the film’s brilliantly designed climactic set piece, but also the movie’s fantastic score, provided by Daniel Pemberton (Spider-Man: Into the Spider-Verse). Pemberton not only gives each character an appropriate theme, but litters the score with inventive and brilliant little motifs that ties the even the most disparate elements together in a surprisingly effective way.

The film’s only real misstep is its pacing, which is the result of how Birds of Prey presents its narrative. It’s a simple, straight-forward story, yes, but it’s told in an intentionally jumbled fashion. And that creative decision makes sense, given it’s Harley acting as the film’s narrator. There are numerous times when she needs to double back to moments we’ve already seen so she can fill in back-story or add some much-needed context. Still, this occasionally over-complicates and stops the movie cold, but those moments are thankfully very few and fleeting. Besides, it’s an understandable misstep, which one could argue ultimately matches the film’s overall tone and approach given the character who’s recounting these events.

It’s worth noting that since Birds of Prey is considered a spin-off of the 2016 blockbuster Suicide Squad, there are a few nods to that much-maligned misfire to pop up along the way. Also, those already familiar with these characters, be it from comics or cartoons, etc., should be able to catch some of the hilarious background gags riddled throughout the movie.

Genuinely fresh, uniquely and joyfully feminist, and riddled with eye-popping spectacle, Birds of Prey is a rough and tumble zany time with some the toughest, craziest personalities Gotham City has to offer. This deliriously manic movie not only embraces some of the more kookier aspects of Harley Quinn and her off-kilter compatriots and foes, and rightfully so, but does so in a way that never feels superfluous, unnecessary or disrespectful, nor is it ever at the expense of the film’s story. A lot of care clearly went into crafting this movie, down to the smallest, tiniest detail, and it’s evident in the final product. Sure, the movie may stumble once or twice, but you can’t deny that Birds of Prey is a total blast from start to finish. Like Harley Quinn herself, there’s nothing else quite like it out there. Highly Recommended!

Check out The World’s Finest review for the DC Universe Harley Quinn animated series!
Did you know there was a Birds of Prey live-action TV series? Get more details here!