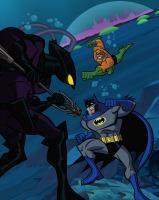 Building on the iconic character of Batman, this interpretation of the classic Batman franchise finds Batman teaming up with heroes from across the DC Comics Universe, delivering non-stop action and adventure with a touch of comic relief in this stylish animated series. Best of all, Batman isn’t going at it alone! Blue Beetle, Green Arrow, Aquaman and countless others will get a chance to uphold justice alongside him. Though still based in Gotham City, the Caped Crusader will frequently find himself outside city limits, facing situations that are both unfamiliar and exhilarating. With formidable foes around every corner, Batman will still rely on his stealth, resourcefulness and limitless supply of cool gadgets to bring justice home!

Green Lantern: The Animated Series
Airs Saturdays at 9:30 a.m. ET/PT
Starting September 2nd, 2013 on Cartoon Network Canada
As Earth’s Green Lantern, Hal Jordan is used to being in dangerous situations — but he’s never faced anything like this! Set at the farthest reaches of deep space, Green Lantern: The Animated Series finds Hal on the Guardian Frontier, where he must face down an invasion by the Red Lantern Corps. Powered by pure rage, the evil Red Lanterns have sworn to destroy the Green Lantern Corps and everything they stand for. Dispatched on the experimental spacecraft The Interceptor, Hal is soon joined by an all-new group of heroes on a mission to protect Guardian Space — and the Green Lantern Corps itself!

Young Justice
Airs Saturdays at 8:00 p.m. ET/PT
Starting September 2nd, 2013 on Cartoon Network Canada
In Young Justice, being a teenager means proving yourself over and over – to peers, parents, teachers, mentors and, ultimately, to yourself. But what if you’re not just a normal teenager? What if you’re a teenage super hero? Are you ready to join the ranks of the great heroes and prove you’re worthy of the Justice League? That’s exactly what the members of Young Justice – Robin, Aqualad, Kid Flash, Superboy, Miss Martian and Artemis – will find out, whether they have what it takes to be a proven hero.

Green Lantern: The Animated Series #14, the final issue of the bi-monthly DC Comics title based on the acclaimed animated series of the same name, arrives in comic book and hobby stores today. A digital copy will also be available through ComiXology and DC Comics. The Green Lantern: The Animated Series comic title featured stories which took place in continuity with the animated series’ source material. Official details for this issue are available below.

Written by: Ivan Cohen
Art by: Dario Brizuela
Final Issue! While battling a rogue Manhunter, Aya is infected by a virus, and Hal and Razer shrink themselves to microscopic size to see if they can fix her … and find Kilg%re! Can they win such a small battle against such large odds?

Additional details on the Green Lantern: The Animated Series comic series can be found here. Stay tuned for further updates here soon at The World’s Finest 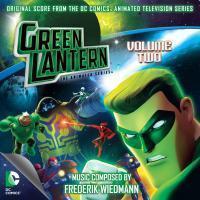 ORDER “GREEN LANTERN: THE ANIMATED SERIES – VOL 2: LIMITED EDITION” starting July 2nd at 12pm PST at www.lalalandrecords.com and get your CD booklet autographed by composer Frederik Widemann at no additional charge. Autographs are available while supplies last and are NOT guaranteed.

Complete details on this soundtrack release are available at The World’s Finest Green Lantern: The Animated Series subsite.

“This soundtrack for Green Lantern: The Animated Series is full of the best moments of this [second] season,” said Wiedmann. “You’ll get plenty of epic adrenalin loaded action, but also the key emotional moments of Aya and Razer’s complex relationship.”

“I hope you enjoy this variety of Green Lantern: The Animated Series music as much as I enjoyed writing it!,” he added.

La-La Land Records and Warner Bros Animation are excited to announce the release of VOLUME 2 to the Green Lantern: The Animated Series. This jam packed cd features over 75 minutes of the very best music as heard in the 2nd half (or second season) from the animated series. If you liked Volume one, you will love Volume two!

Complete details on this soundtrack release are available at The World’s Finest Green Lantern: The Animated Series subsite.

The final thirteen episodes of the acclaimed cartoon Green Lantern: The Animated Series, which recently finished its run as part of the DC Nation programming block on Cartoon Network, are now available on home video in a new two-disc DVD release. Green Lantern: The Animated Series – Season One, Part Two: Manhunter Menace brings the last thirteen episodes of the CGI-animated series to home video for the first time. The episodes included feature the ongoing plot of the Green Lanterns preparing to do battle with the robotic terror The Manhunters. The new release is now available on shelves for the suggested retail price of $19.97, and can be found in most retail and online vendors. Click on the thumbnails below for a closer look at the package artwork, with the official product description following.

Synopsis:
The groundbreaking CGI animated series returns. After saving the Guardians of the Universe from a Red Lantern invasion, Hal Jordan and his fellow Green Lanterns Kilowog, Tomar-Re and Aya discover an even greater evil that threatens to extinguish all life! Follow the Lanterns back on board the Interceptor in an interstellar race to destroy the murderous, mechanical Manhunters, aid Saint Walker and his new Blue Lanterns and stop the planet-eating Anti-Monitor. Along the way they again encounter the Star Sapphires, meet the DC fan favorite Guy Gardner, Sinestro, Larfleeze and more. Pick up this exciting double-disc set to see if Green Lantern’s light can defeat these powerful new enemies! If not, the universe will fall into darkness!

Green Lantern: The Animated Series – Season One, Part Two: Manhunter Menace is now available to own at most online and retail outlets for the suggested retail price of $19.97.

Additionally, La-La Land Records provided The World’s Finest with an exclusive first look at the second Green Lantern: The Animated Series soundtrack CD release, set for release on Tuesday, July 2nd, 2013. Details on this release, including availability and content, can be found here and here.