While the Legion of Super Heroes in the 31st Century comic series, based on the fan-beloved Legion of Super Heroes animated series, may now be a thing of the past like the animated series that inspired it, its impact on the fan community remains solid. The World’s Finest caught up with Jack Briglio, one of the writers on the comic series, to discuss his time on the short-lived series.

The World’s Finest: To kick things off, care to give us a quick run down of yourself and your works for those who may not be familiar?

Jack Briglio: Ive written issues of Scooby Doo and Legion of Super-Heroes in the 31st Century for DC Comics. Before that, I wrote an indy all-ages fantasy series called Growing Up Enchanted with artist Alex Szewczuk that was well received – the series received an Eisner nomination in 2003 for Best Title Aimed at a Younger Audience.

WF: Now, to get right into it, what attracted you to the Legion of Super Heroes in the 31st Century comic series? Did you watch the series the comic is based upon?

JB: Well, it didnt take too much to attract me to either the show or the comic book series – Ive been a fan of the comic and its diverse cast of characters since I was a kid writing and drawing my own version of their stories as the League of Super-Heroes! Catchy title, I know. So, being a long time fan, I was excited to finally see them get a shot as an animated series and I jumped at the chance to write some of their adventures for the comic book series.

WF: Any thoughts on the series and how, according to both fans and the crew of the series, the animated series was mishandled?

JB: Its too bad that the Legion series didnt get the chance to go five seasons like its predecessors. I thought the first season was excellent and set up their world well. The Subs, Ultra Boy & introducing Mekt, and the Sun-Eater story were some of the highlights for me. The second season was mainly forgettable, though we did get to see the origin retold and there were some nice touches here and there. I agree that it was a disappointment in comparison to what I thought was a good start in the first season. What was most disappointing was cancelling the series, though. They barely scratched the surface of the cast and the whole Legion universe – thats whats so frustrating to the fans, I imagine.

WF: You wrote the final issue of Legion of Super Heroes in the 31st Century. Were you hoping to give the series a nice, simple send off? Did youknow your issue would be the final Legion animated tale, ordid that happen after the fact?

JB: It was after the fact. My story wasnt originally planned as the finale so when I was told it was going to be the last issue, I had to rewrite it to give the series a proper send-off. I think (and I hope) that having the 1959 Legion appear at the end of the story watching over the animated Legion, just as animated Brainy was doing in his dimensional portal earlier in the issue, was a nice, simple send-off and a surprise. I wanted to celebrate the Legions 50th Anniversary as well and what better way than with the Legion mantra – “Long Live the Legion?”

WF: Do you have any favorite mainstream Legion moments or characters you worked into your Legion of Super Heroes in the 31st Century issues? Are there any that you would have liked to found a way to squeeze into one of your issues?

JB: Telling Element Lads story in issue 14 and having Bouncing Boy and Triplicate Girl go out on a date in issue 8 fighting Starfinger – those were tips of the hat to the Legion canon, definitely. Brainys visions in the dimensional portal in issue 20 as well – I was able to reference some nice bits of Legion and Superman history. And, actually, had the series lasted longer, I had a few stories pitched stemming from both issue 14 and 20. An Element Lad sequel where he faces off against Roxxas, Luthor, and the Legion of Super-Villains. And that vision of seeing the Legions destruction with strewn bits of kryptonite everywhere? That was definitely a set-up for a future issue. Alas and alack. L I would have liked to have squeezed in Ultra Boy, Mon-el, and Ferro Lad as well but it was not meant to be, I guess.

WF: Youve also done work on DCs Scooby-Doo comic series, which I imagine is a completely different writing process. How do you approach such projects as Scooby-Doo differently than Legion?

JB: Scoobys stories are strictly mysteries and shorter in length (10-12 pages max) so setting up mysteries in less than 20 pages can be a challenge. Their stories do allow you to run loose with humour so its a lot of fun to tell the crazy antics and slapstick humour that Shaggy & Scooby bring to every mystery!

WF:You were interviewed in 2007 by the Canadian network CTV for your comic work. Was it surreal to be interviewed on one of your passions? And did it help with getting your name out there a little further?

JB: Definitely. I was shocked to get the call asking to be interviewed. They had seen an article in the Ottawa Citizen about me so it was totally unexpected. It was nice to get the exposure and interest. The interviewer was a comic book fan so that probably helped! I did get a lot of attention locally (friends, family, co-workers etc.) but other than that and the extra copies sold locally, Im not sure what effect it had in getting my name out there.

WF: As we wrap this up, care to let us in on future projects you have coming down the pipe-line? Where will we be seeing your name next?

JB: I have some more Scooby pitches in the pipeline and Im also in discussion with DC and a couple of other companies about new projects. Nothing solid that can be reported yet but hopefully will know more after I come back from the New York Comic Con next week.

The World’s Finest would like to thank Jack Briglio for taking the time to speak to us!

Legion of Super Heroes in the 31st Century came to an end with issue #20 in November 2008. Stay tuned for further updates on the DC Comics animated comic line, including news and interviews!

Below are the total estimated sales numbers for the animated comics that shipped in October 2008.

The Batman Strikes experienced a slight dip with the release of its fiftieth and final issue. The Batman Strikes #50, the last of the series, featured Batman teaming up with The Demon in a Halloween-themed tale. 2008 saw the cancellation of every major animated titles printed by DC Comics. Justice League Unlimited and Teen Titans Go! were both cancelled earlier this year by DC Comics, releasing their respective final issues within weeks of each other, and the final issue of Legion of Super Heroes In The 31st Century was released in November 2008. DC Comics has no plans to currently revisit these titles in the near future, with the exception of possible collection releases in 2009.

The next animated-inspired comic title, Batman: The Brave and The Bold, will hit shelves in January 2009.

Below is the official solicitation information for the new issue.

THE LEGION OF SUPER-HEROES IN THE 31st CENTURY #20

Metallo journeys to the future for the ultimate power source: Kryptonite! But if he destroys Superman, will the Legions fate unravel, as well? Dont miss the exciting conclusion to this amazing series!

The final issue of Legion Of Super Heroes In The 31st Century went on sale last week. Batman: The Brave and The Bold, the latest animated comic from DC Comics which is based on the new animated series with the same name, premieres in January 2009.

Tucker Discusses “Batman: The Brave And The Bold,” “Legion Of Super Heroes,” More

To view this new interview, click on the links provided below. 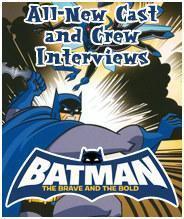