Catwoman: Hunted Special Features
—When The Hunter Becomes The Hunted (New Featurette) – When does the hunter become the hunted? In this case it’s when Selina Kyle steals the “Cat’s Eye” emerald and Batwoman informs her, “Congratulations, Selina, you just became Leviathan’s No. 1 target.” Those targeting Catwoman include wave after wave of assassins, ninjas, and Super-Villains – from Tobias Whale, Black Mask, Cheshire and Nosferata to Solomon Grundy, Talia al Ghul and Cheetah. In this all-new featurette, our experts break down the backstory of each integral villain.
—Catwoman: The Feline Femme Fatale – Watch the documentary on Catwoman’s history. 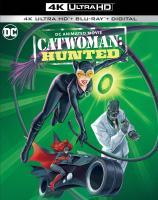 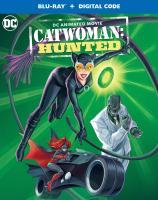 Available on 4K Ultra HD Blu-ray, Blu-ray and digital media, Warner Bros. Home Entertainment dishes out a solid audio/video presentation for Catwoman: Hunted along with some modest but still-engaging bonus content. While the consumer will need to ultimately decide which edition to get, the 4K Ultra HD release remains, as usual, the cream of the crop.

Digging into the movie’s audio and video quality first, Warner Bros. delivers another reliably solid presentation for Catwoman: Hunted across the board. Starting with video, the 2K upscaled transfer shines brightest on the 4K Ultra HD Blu-ray release, with banding and compression issues essentially non-existent. Colors are vibrant and unblemished, while blacks are deep and dark. There is a noticeable uptick in visual quality when compared to the regular 1080p transfer on the packed-in standard Blu-ray disc.

For audio, the DTS-HD 5.1 Master Audio mix offers solid range and crisp sound, through it appears a little reined in toward the center channel. Action beats hit the mark, dialogue is crisp and the score, while occasionally overpowering at times, sounds full. The audio quality is essentially the same across all editions, but the 4K boost gives the Ultra HD release a definite leg up.

In terms of bonus content, it’s another exercise in quality over quantity. The main bonus feature is the nearly 40-minute long “Catwoman: The Feline Femme Fatale” documentary feature, which essentially covers Catwoman’s history on page and screen. Narrated by Tara Strong, it’s a legitimately absorbing look back at how the character has evolved over the years. Through a mix of new and archival interview footage, Julie Newmar, Michelle Pfeiffer, Eartha Kitt, Frank Miller, Dan Didio, Bob Kane and others pop up frequently throughout this journey across Catwoman’s many lives.

Also part of the package is “When The Hunter Becomes The Hunted,” which covers the cast of foes Catwoman faces off against in Catwoman: Hunted along with the feisty feline herself. Running 19 minutes, the extra offers up some basic details on Black Mask, Tobias Whale, Cheshire, Cheetah, Talia Al Ghul, but understandably goes a little deeper into Catwoman and her abilities and relationships. Catwoman: Hunted writer Greg Weisman, producer Ethan Spaulding, and casting/voice director Jamie Thomason all offer their two cents, along with other notable entertainment and comic creatives.

Outside of a digital code and a standard Blu-ray copy of Catwoman: Hunted, there is no other additional content.

Warner Bros. Home Entertainment has put together a good home release for Catwoman: Hunted, coupling the entertaining main feature with some informative extras. For those interested in the superior presentation, the 4K Ultra HD Blu-ray release is the way to go thanks to a noticeably better video transfer. It’s also hard not to miss the stacked home releases studios used to put out, but Warner Bros. Home Entertainment still manages to pump out some quality special features here, even if the quantity is not what it once was.

It’s also worth noting that, with the same bonus content being offered across all available formats, both the Blu-ray and digital HD editions make for fine alternatives to the Catwoman: Hunted 4K release, even if they can’t match the latter’s overall quality. Whichever way you choose, you can’t really go wrong. Recommended!

[ Continue on to the Catwoman: Hunted animated feature review ]