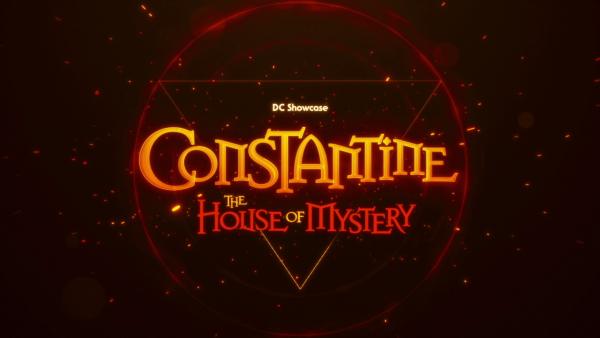 Featuring a collection of short stories spotlighting Constantine, Kamandi, The Losers, and Blue Beetle, DC Showcase – Constantine: The House of Mystery travels across the DC Universe to showcase some of DC Comics most beloved (and perhaps lesser-known) characters. And at the center of it all? The Hellblazer himself – John Constantine!

Matt Ryan (Constantine, Legends of Tomorrow) reprises his live-action and animated role as the Hellblazer himself in Constantine – The House of Mystery. In the all-new short, John Constantine wakes up in the eerie House of Mystery with no recollection of how he got there. Fortunately, Zatanna and his friends are all there. Unfortunately, they have a bad habit of turning into demons and ripping him to shreds, over and over again! Camilla Luddington (Grey’s Anatomy) and Ray Chase (Licorice Pizza) reprise their roles from Justice League Dark: Apokolips War as Zatanna and Jason Blood/Etrigan, respectively, while Robin Atkin Downes (The Strain) and Damian O’Hare (Pirates of the Caribbean: The Curse of the Black Pearl) reprise their roles from Constantine: City of Demons as Negral and Chas, respectively. In addition, Grey Griffin (Scooby-Doo franchise) and Lou Diamond Phillips (La Bamba, Longmire, Young Guns) join the cast of the short, which is directed by Matt Peters (Injustice) from a script by Ernie Altbacker (Batman: Hush).

For mysteries starring John Constantine, check outJustice League Dark,Constantine: City of Demons, and Justice League Dark: Apokolips War!
Special Coverage: DC Showcase Takes Us to Some of the Wilder Corners of the DC Universe
Share your thoughts on social media via The World’s Finest Twitter and Facebook pages!