In DC League of Super-Pets, Krypto the Super-Dog and Superman are inseparable best friends, sharing the same superpowers and fighting crime in Metropolis side by side. When Superman and the rest of the Justice League are kidnapped, Krypto must convince a rag-tag shelter pack—Ace the hound, PB the potbellied pig, Merton the turtle and Chip the squirrel—to master their own newfound powers and help him rescue the Super Heroes. 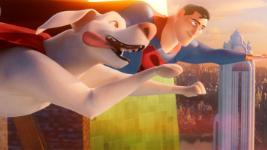 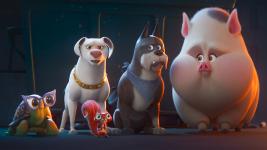 Superman’s best friend, Krypto the Superdog, puts together a league of crime-fighting pets in the fairly enjoyable DC League of Super-Pets, starring Dwayne Johnson as the superpowered canine and Kevin Hart as the hound, Ace! A wholesome romp suitable for the entire family, though unknowing parents may find themselves occasionally checking their watches, DC League of Super-Pets is packed with nods and jokes for long-time fans and kids, but the film’s ho-hum plot finds itself stretched mighty thin by the time the credits roll.

Following with a nifty flashback to Krypton’s destruction, DC League of Super-Pets finds Krypto the Super‐Dog and Superman (John Krasinski) as inseparable best friends, sharing the same superpowers and fighting crime in Metropolis side by side. Krypto’s a little jealous of Superman’s girlfriend, Lois Lane (Olivia Wilde) but, for the most part, it’s a good life for Metropolis’ heroes. However, when Superman and the rest of the Justice League are kidnapped, Krypto must convince a pack of shelter pets – Ace the hound (Hart), PB the potbellied pig (Vanessa Bayer), Merton the turtle (Natasha Lyonne) and Chip the squirrel (Diego Luna) – to master their own newfound powers and rescue the superheroes from Lex Luthor (Marc Maron).

Firmly directed at a younger audience, DC League of Super-Pets offers up a deceptively smart concept (basically, what if family pets had super powers?) that’s peppered with great comedic bits and jokes, but ultimately doesn’t reach the full potential it should, despite the admirable efforts of the film’s cast. We’re introduced to the film’s cast of “super pets” when Superman takes Krypto to an animal shelter to find the powerful pup a new friend. The meet-and-greet goes predictably poorly, though it elicits some of the film’s best laughs, and shortly afterwards the mostly good-natured shelter animals are exposed to some orange-colored Kryptonite with each gaining superpowers. Naturally, more gags and the inevitable team-up ensue.

Mashing together the standard conventions of the comic book blockbuster and the kid-friendly western-animated movie, DC League of Super-Pets is loud, brash and full of action, laced with a snarky, irreverent tone (and has clearly nothing to do with the 2005 Krypto the Superdog animated series). There’s some good-natured ribbing at the four-colored source material, and it does scramble up some laughs, though most of the jokes have been covered before (i.e.: Superman’s glasses). There will be plenty of jokes that the younger set will enjoy, some of it a little low-brow but nothing out of the ordinary for modern animated theatrical features.

DC League of Super-Pets does make a legitimate effort to toss in some humor for the adults and parents in the audience, but most end up as misfires. There’s a running “The Great British Bake-Off” joke that repeatedly falls flat and a nod to “The Warriors” that’s great in concept but bewildering in execution, for example.

The cast of DC League of Super-Pets does admirable work in bringing the film together. Lyonne as Merton (the turtle) and Bayer as PB (the pot-bellied pig) nab some of the film’s best laughs, especially the film’s running gag of bleeping Merton’s curse words, and Kate McKinnon steals the show as Lulu, an evil, narcissistic guinea pig who believes she belongs by Luthor’s side. Keanu Reeves will also definitely draw some guffaws as the comically-tortured contrarian Batman. Johnson and Hart also continue to work their chemistry here and, while it’s not their best material, it’s still another notable outing for the duo. 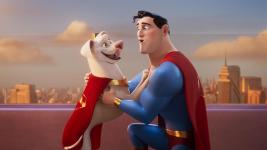 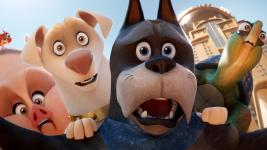 Despite the best efforts of the film’s impressively talented cast, DC League of Super-Pets‘ story is a little too simplistic and can’t justify its 100-minute runtime. Krypto amassing his super-team, and learning the odd lesson or two, just isn’t a hefty enough story. Eye-catching action beats and self-referential jokes help pass the time, but the slight plot drags the movie to the finish line. Joking about the cliches we see in nearly every superhero movie can’t hide a barely-there story. And while the film’s overall premise is fun, there’s still a sense of “been there, done that” that can’t be shook. In the end, DC League of Super-Pets is just another origin story. More could’ve been done with the premise, but DC League of Super-Pets sticks with the same tropes we’ve seen time and time again in superhero movies, only this time with some animal puns sprinkled in.

DC League of Super-Pets also lacks an emotional hook. There’s heart there, and the movie does occasionally tug at the strings – especially when it comes to the respective backstories of the film’s central shelter pets – but it’s messaging ends up a little muddled. What begins as a pretty fun story about Krypto making new friends and learning to play with others ends up awkwardly turning into a story apparently about pairing the pets with super-heroes owners. The film’s story just doesn’t have the needed substance to string these two ideas together, but it’s still a good-natured attempt.

The mixed quality of the film’s story also unfortunately translates over to the animation quality. DC League of Super-Pets is serviceably animated, but it falls well below recent ground-breaking efforts like The Lego Batman Movie, Spider-Man: Into the Spider-Verse and The Mitchells vs. The Machines. While those films pushed the create limits of 3D animation, DC League of Super-Pets does enough to get by and look visually pleasing most of the time. As with the script, there are some really impressive moments, but the overall quality is merely acceptable. That said, there are some fantasy sequences here that are really gorgeous, but they’re unfortunately fleeting. Character designs, however, are fantastic. They’re fresh and respectful to the DC Comics source material without being slavish.

DC League of Super-Pets is a commendable if formulaic effort overall, but it’s held back by the shortcomings of its paper-thin plot. It’s a good diversion for families as kids will undoubtedly enjoy the animal antics while adults chuckle at most of the jokes, pens and superhero banter. It may not soar like it’s central super-canine character, but DC League of Super-Pets still gets off the ground.

It’s not the strongest effort to come from Warner Bros. in terms of the studio’s superhero and animated output, but DC League of Super-Pets is still a mostly satisfying product, even though it feels like it should’ve been better. Despite issues with its story and the mostly pedestrian animation, the movie doesn’t really overstay its welcome, but it can be a struggle to finish. Bolstered by a great voice cast, coupled with flashes of brilliance and strong action, DC League of Super-Pets may not hit the heights it should, but it’ll still fetch some smiles from the younger set (and probably most adults). DC League of Super-Pets comes Recommended, but with reservations.

Please note Warner Bros. Home Entertainment provided The World’s Finest with a copy of this title to review. 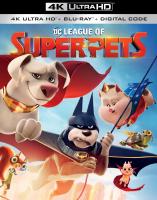 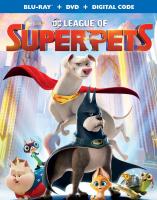 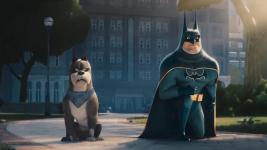 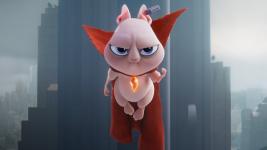