Description:Deathstroke: Knights & Dragons offers a new take on the Deathstroke legacy. Mercenary and master assassin Slade Wilson leads two lives: one as the relentless killer known as Deathstroke, and the other as a dedicated family man. When these worlds collide, forced together by the vicious terror group known as H.I.V.E., it is the killer in Slade who must fight to save his loved ones, as well as what remains of himself. With his soul torn apart and his young son held captive, Deathstroke will have to atone for the sins of his past to fuel the battles of his future! 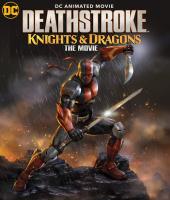 Deathstroke: Knights & Dragons Home Media Special Features
Blu-ray Combo Pack and Digital
-Deathstroke: One-Man Death Machine (New Featurette) – Some think he’s a villain. To others, he’s an unsung hero of secret wars fought all over the world. One thing’s for certain: When you see the orange-and-black mask, Deathstroke is coming!

One of DC Comics’ most popular characters, Deathstroke finally headlines his own animated movies and fans of the anti-hero (for lack of a better descriptor) will not be disappointed. A thorough dive into his past, Deathstroke: Knights & Dragons finds dark secrets bubbling to the surface, forcing Deathstroke (aka Slade Wilson) to set right a life he’s left in tatters. With great casting, a visually stunning animation style and a compelling story, Warner Bros. Animation, Blue Ribbon Content and DC have put together a solid animated outing that works well for any follower of The Terminator.

Foregoing earth-shattering fisticuffs with the likes of the Justice League or the Teen Titans, Deathstroke: Knights & Dragons focuses inward, and makes Slade Wilson’s fight an intimate one, and all for the better. While Slade is a great opponent for some of DC Comics’ biggest hitters, his biggest foes are his own worst impulses, and this DC Animated Movie title leans hard into just that. His work, his complicated family life, those who stand in his way, Slade is at the center of an intriguing story of consequence, and the movie – though not perfectly – explores that mess thoroughly. Everything that happens in this movie is, essentially, the result of choices Slade has made in his past, and it makes for an engrossing watch.

The script, by J.M. DeMatteis, gets right to the core of Deathstroke’s character, laying out all of the character’s many strong points and flaws, with both explored thoroughly during the course of the story. His failings have consequences, and they might not be enough for him to overcome. Whether it’s his failed relationships, his secret double-life, or just the bad decisions he’s made along the way, it all comes crashing down in a climactic (and disastrous) family reunion. Given his extensive history with both DC and Marvel comics, plus the nifty tale he’s put together for Deathstroke: Knights & Dragons, DeMatteis clearly knows what makes Slade tick. His script is clearly influenced by the character’s earlier four-color comic book years, which gives Deathstroke: Knights & Dragons an old-school vibe like something out of a 1980s action flick.

DeMatteis’ script is superbly supported by both slick directing and a cool visual aesthetic clearly influenced from the medium that gave us Deathstroke in the first place. Director Sung Jin Ahn – whose previous credits include Niko and the Sword of Light and Teenage Mutant Ninja Turtles (2012), among a host of other really cool projects – guides the gritty-yet-colorful tone of the film with ease, ably balancing attention-demanding action beats and the quieter moments needed to the film’s characters a moment to connect and collect. The character designs, led by Chris George, work perfectly with the film’s clear intent to offer a look that’s unique and stands out in the crowd. Designs are simple but hit all the visual cues we’re familiar with – or are homages to the more colorful source material costumes – when it comes to these characters.

The animation by Titmouse (with additional services by REVE Animation) is stellar though occasionally inconsistent, resulting in the odd moment of noticeably underwhelming animation here and there. Even with that, Deathstroke: Knights & Dragons‘ striking – and very different – visual style really helps to separate it from DC Comics’ wealth of animated offerings. Action sequences are especially a treat, usually moving with a quick, dynamic flow and letting the beats really hit hard when they need to. Blood splatters across the screen, bones break and limbs are lost, all with panache! The film’s first two major action beats are possibly the film’s best, but the climactic battle is also noteworthy for its scale and execution. The creators behind the film know that seeing Deathstroke and company in action, with no drawbacks or limits, is a major selling point for this title, and they don’t disappoint. 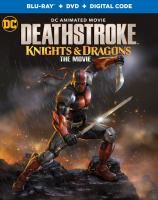 As with basically every DC Comics-based animated project that’s come before, casting is solid. Michael Chiklis as Deathstroke/Slade Wilson is undeniably pitch-perfect in the role, bringing a sense of world-weariness and cynicism to the character, and Sasha Alexander pulls off a great performance as Slade’s wife, forced to come to terms with and deal with the fallout of a life-time of lies. Performances among the cast range from adequate to good, with no real weak link or distractingly bad turns, though Faye Mata and Griffin Puatu, as Jade and Jericho, respectively, get some really excellent moments towards the film’s climax.

It’s worth noting the film’s score by Kevin Riepl is available to own digitally via WaterTower Music. It’s an invigorating, pulsing score that’s well worth a listen as its own unique offering. The film’s score really helps in connecting the emotional drive of the story with the action, and it ranks as one of the best to come from an animated DC Comics offering this year.

In terms of any shortcomings, Deathstroke: Knights & Dragons only has a couple minor issues against it. First and most notably, some scenes do linger a little longer than it feels like they should. While it does offer a breather, the extra few moments are a drag on the film’s momentum. And the finale, though satisfying, does wrap things up perhaps a little too quickly and easily. There are also a couple character choices, tied to the finale, that aren’t entirely earned and could’ve used more flushing out.

Turning to Deathstroke: Knights & Dragons‘ home media presentation, Warner Bros. Home Entertainment has given the animated feature an adequate release both on physical and digital media. In terms of physical presentation, the Blu-ray includes an excellent audio and video transfer, with the movie sounding superb with its DTS 5.1 Master Audio HD mix and looking excellent with a great-but-flawed visual presentation. Some macroblocking and compression is noticeable but not distracting. Outside of trailers, the Blu-ray sole bonus feature, a brief featurette called “Deathstroke: One-Man Death Machine,” offers a good look at the character’s overall history, impact and enduring popularity over the years since his creation. It also covers different media adaptations of Slade, and features appearances by Chiklis, Marv Wolfman, and Manu Bennett, among others.

The bonus featurette is also included on Deathstroke: Knights & Dragons‘ digital release, along with a 4K transfer that looks incredible. The film’s colorful, comic book-inspired visual design looks stunning with the brighter colors and deeper blacks. While the Blu-ray/DVD Combo Pack release of the movie serves its purpose admirably, especially for those who still prefer physical media, the digital release looks especially impressive. Ultimately, either option works for those interested in purchasing the movie, but the digital release is the higher quality release between the two options.

While not perfect (much like the title character himself), Deathstroke: Knights & Dragons is nonetheless an interesting dissection of DC’s famed anti-hero mercenary, and the movie’s cool visual style gives it a hypnotic flair that’s hard to look away from. Slade’s story is genuinely interesting, especially here as he attempts to dig himself out of some rather deep holes, and this movie manages to hit some pretty impressive highs the lower Slade falls. That, coupled with some impressively directed and boarded action sequences, really drive the film’s narrative momentum, though some uneven pacing and a too-tidy finale cause a couple stumbles along the way. Regardless, Deathstroke: Knights & Dragons serves as both a great first step into the larger world of Slade Wilson, but it’s also a gratifying reminder for long-time fans of what makes The Terminator one of the most popular, and feared, characters in the DC Comics universe. Recommended! 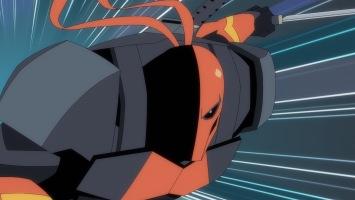 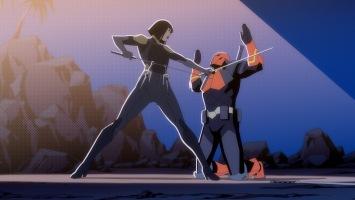 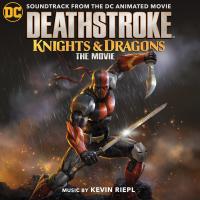