Description: Based on the popular videogame franchise, Mortal Kombat Legends: Scorpion’s Revenge, brings the game to life in a feature-length animated film produced by Warner Bros. Animation in coordination with NeatherRealm Studios and Warner Bros. Interactive Entertainment. Mortal Kombat Legends: Scorpion’s Revenge, spotlights the once-in-a-generation tournament between the champions of Outworld and Earthrealm – a competition that will ultimately determine the fate of Earth and all its citizens. Lord Raiden, protector of Earthrealm, must gather the greatest fighters of his realm to defend it from the evil Shang Tsung in the battle to end all battles – Mortal Kombat! 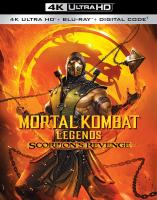 4K Ultra HD Blu-ray Combo Pack, Blu-ray Combo Pack and Digital
-From Epic Game to Extreme Animation – Mortal Kombat co-creator Ed Boon and the filmmakers reveal the creative process behind adapting the best-selling game to an all-new animated film.
The Weapons, Wardrobe and World of Mortal Kombat Legends – The artists reveal the design challenges of animating the world of Mortal Kombat, from authentic armor to wildly imaginative weapons and fantasy settings.
-The Savage Sound Design of Mortal Kombat Legends – This hard-hitting audio exploration reveals the art of designing the sonic language of the fight scenes.
-Mortal Kombatants – Dive deep inside the cast of characters to reveal their unique abilities, signature moves and backstories.
-Filmmaker Commentary – Producer Rick Morales and screenwriter Jeremy Adams sit down for an insightful audio commentary that reveals the process of creating a compelling animated film based on one of today’s most popular fighting games.

Arguably the best Mortal Kombat movie to date, Mortal Kombat Legends: Scorpion’s Revenge is an action-packed, blood-soaked animated adventure that is not only a solid feature in its own right, but also does well by the beloved video game franchise. Skulls are cracked, limbs are broken and body parts go flying in this gleefully over-the-top and unexpectedly fun outing which is both accessible to new audiences and unquestionably required viewing for long-time fans.

Right from the get-go, Mortal Kombat Legends: Scorpion’s Revenge is a clear love-letter to the beloved video game franchise and its long-time fans. Plus, for new viewers, it admirably positions itself as a wildly entertaining introduction into the world of Mortal Kombat and its eclectic cast of characters. Even if they’ve only played Mortal Kombat vs. DC Universe, or have just a passing knowledge of this particular realm, viewers shouldn’t be lost as this movie dives deep into the game’s surprisingly elaborate mythos and lays everything out as clear as can be, delivering info through great story beats, wicked action sequences and courtesy of the film’s fun characters.

The story doesn’t cover too much new ground for those familiar with the tournament, but it still presents everything in a way that feels novel and fresh. Mortal Kombat Legends: Scorpion’s Revenge once again brings us to the fabled once-in-a-generation tournament between the champions of Outworld and Earthrealm, a competition that will ultimately determine the fate of Earth and all its citizens. As Lord Raiden gathers his forces to defend the realm, one fighter in particular is looking to settle a score and will stop at nothing to get it. The fighter? Scorpion. And he’ll kill who he has to to get what he wants.

Using Scorpion, one of Mortal Kombat‘s most popular characters, and his tragic back-story to both kick-start the movie and serve as a gateway into this brutal, over-the-top world of ancient gods and brutal fisticuffs, is an effective way to connect the viewer to the larger-than-life madness that awaits. His backstory proves both tragic and compelling, and there’s genuine interest to see how his path will intersect with the larger story. Plus, using an established character over some random new creation gets us just that much closer to understanding the world these characters inhabit. When Scorpion’s path takes him to the fabled title tournament, not only do we get to watch his story play out, but we’re also introduced to a wealth of Mortal Kombat’s most prolific fighters. While the Mortal Kombat saga’s backstory is arguably unnecessarily convoluted at times, and maybe even confusing, Scorpion’s story provides the focus that helps every other aspect of this movie click into place, even if the transition between character focus can be a little clunky.

Other familiar faces joining Scorpion on this animated slugfest include Johnny Cage, Sonya Blade, Liu Kang, Raiden, Goro, Jax and many more. Whenever the film gives Scorpion a breather, it’s usually Cage, Blade and Kang who tap in to keep the story rolling and the journey undeniably entertaining. Cage is especially a stand-out, giving Mortal Kombat Legends: Scorpion’s Revenge both some of its biggest laughs and slickest action beats. And considering the movie, that’s saying something. This movie is not only packed with plenty of nods and Easter eggs for fans of the franchise, but there’s plenty of callbacks to classic action films from over the years, including Enter the Dragon among many others. Unquestionably, director Ethan Spaulding (Batman: Hush) and writer Jeremy Adams (Teen Titans Go! vs Teen Titans) are fans of the fabled tournament, and there’s a clear love of the source material from the movie’s cast and crew, and that comes out in spades through the film’s runtime.

While shifting between the larger-than-life theatrics of the actual Mortal Kombat tournament and Scorpion’s personal mission of revenge can be a little awkward at times, Mortal Kombat Legends: Scorpion’s Revenge is able to juggle both with fairly well. The film’s only major shortcoming is that some important details are skipped over, particularly when it comes to the power set of some of the cast and how those abilities came to be and are used (though that’s possibly held over for future Mortal Kombat Legends movies), but that’s a minor complaint at best (and maybe not at all, given the history of the franchise). The rest of the expected beats and tropes are handled with flair and usually accompanied by buckets of blood.

As you can likely guess, this movie holds nothing back when it comes to the furious fisticuffs that unfold throughout. Every punch, every kick, it’s all on screen in all it’s blood-drenched glory. You want spines ripped, skulls smash and bones broken? It’s all here. As with the rest of the film’s creative team, the animation studio jumps in head first and doesn’t look back. Action scenes, for the most part, are riveting and each blow is depicted in glorious, gruesome detail. The animation may slip here and there, with the odd bit of stiff or jumpy character movements, but overall the movie looks fantastic.

The overall look of Mortal Kombat Legends, in terms of production and character design, is undeniably slick. The characters look especially cool, with sharp and stylized designs that capture the feel of their respective video game counterparts while adding a dash of style. Bringing these designs to life is the film’s strong voice cast, with Joel McHale and Jennifer Carpenter leading the pack as Cage and Blade, respectively. Both share some excellent scenes together, with McHale’s comedic chops in full swing. Patrick Seitz and Steve Blum, as Scorpion and Sub-Zero, also deserve a nod for handling some of the more dramatic, meatier aspects of the film’s story. Voice and casting director Wes Gleason assembles a strong overall cast and pulls out plenty of fun performances.

Despite a little clunky story-telling, Mortal Kombat Legends: Scorpion’s Revenge is a fun, thrilling adventure that does right by the long-running franchise. With its strong take on the source material coupled with enjoyable animation, and plenty of excellent action beats and fight scenes, there’s plenty for fans to take in. Plus, it’s definitely friendly to new viewers, too, though the film’s multitude of homages and nods may be lost on them. Given the pedigree behind this movie, made up of regular contributors to the DC Universe Movie and DC Animated Movie lines, it’s no surprise they’ve churned out probably the best Mortal Kombat movie to date.

Be it a fresh viewer or long-time fan, the bonus materials included with the movie should also be of interest. The extra content includes “From Epic Game to Extreme Animation,” “The Weapons, Wardrobe and World of Mortal Kombat Legends,” “Mortal Kombatants,” “The Savage Sound Design of Mortal Kombat Legends,” an audio commentary and an assortment of trailers. Each featurette covers assorted aspects of Mortal Kombat Legends: Scorpion’s Revenge‘s production, and are worth watching for fans of the movies and of the franchise. The audio commentary is a top-notch listen, and is well worth listening too. It’s informative, funny, and is packed with great stories and anecdotes. Available in multiple formats, for the best presentation, the 4K Ultra HD release is the one to beat.

An excellent animated feature, packaged with some enjoyable bonus features and a fantastic high-definition audio/video presentation, Mortal Kombat Legends: Scorpion’s Revenge is a surprising and invigorating jaunt to the biggest tournament around. Long-time Mortal Kombat fans will surely enjoy this, plus it offers an easy-access point for those new to the realm. Touching upon so much of what makes this classic video game franchise so great, in addition to the never-ending supply of surprises and nods throughout, it’s bone-crunching tour-de force that is absolutely worth checking out. Highly Recommended!