The World’s Finest recently approached and asked Young Justice comic artist Christopher Jones to discuss his thoughts and provide commentary on his stint on the acclaimed comic title based on the fan-favorite animated series. Jones joined as regular artist for Young Justice as of issue #5 and provided artwork up to the final issue with #25, save for the odd fill-in issue. Below, Jones provides a series of commentary and production artwork from his time on Young Justice. Continue below for much more!

How time flies can you’re having fun. It’s hard to believe that issue #25, the final issue of our Young Justice comic is out, as it seems like just a couple of months ago that I drew issue #5, my first on the title as penciler.

I don’t think I’ve ever worked on another project in comics that I feel as proud of as this run. I love these characters, and got to draw some iconic moments and fantastic stories.

I think the character designs from the TV show are brilliant so it was no hardship to follow them, but I was delighted to be giving the chance to design the Young Justice versions of characters like Talia al Ghul, Grodd, Deadshot, and Brainiac.

And I couldn’t have asked to have better partners in this series:

It’s hard for my to pick a favorite issue or story from the run, as one of the pleasures of it was the many characters and storylines that were constantly changing and rotating through, making it impossible for me to get bored. But I can probably site some favorite moments… 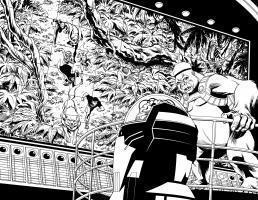