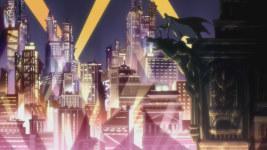 DC Universe original animated movies are created by a unique collaboration between four diverse units within the Warner Bros. family Warner Premiere, Warner Home Video, Warner Bros Animation and, the source of the characters and many of the stories, DC Comics. Leading the charge for the latter group is Gregory Noveck, Senior Vice President, Creative Affairs for the iconic comics company, and credited as Executive in Charge of Production for DC Comics on all of the DC Universe films.

Noveck was instrumental in launching Batman: Gotham Knight into production, guiding the team toward its original concept and recruiting an amazing array of writing talent for the project. It proved to be a most interesting production at every turn including diverging from many of the traditional processes to bridge the creativity between the writers, the production team at Warner Bros. Animation and the directors and animators at three individual studios in Japan.

As Noveck says, the end result is even more intriguing, inspiring and visually stimulating and he looks forward to witnessing the reaction of Batman fans across the planet. His first opportunity will come at Wizard World Chicago on June 28 when he moderates the panel following the world premiere of Batman: Gotham Knight.

Batman: Gotham Knight will arrive July 8, 2008 on DVD and Blu-Ray disc, and will also be available that day On Demand via digital cable and for download through broadband sites.

Noveck explained the origins of Batman: Gotham Knight, his sentiments on the movie, and his thoughts on how it will be received by fans in a short interview this week.