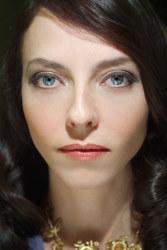 Actress Juliet Landau, a fanboy favorite from her devious appearances on Buffy: The Vampire Slayer and Angel, easily glides into the voice of sultry alien Labella in Green Lantern: First Flight, the next DC Universe animated original PG-13 movie coming to DVD on July 28, 2009.

Warner Premiere, DC Comics and Warner Bros. Animation are set to release the all-new Green Lantern: First Flight on July 28, 2009. The Blu-ray Hi-Def edition, the special edition 2-disc DVD, and a single disc DVD will be distributed by Warner Home Video. The action-packed movie will also be available OnDemand and Pay-Per-View as well as available for download day and date, July 28, 2009.

Turning her attention behind the camera, Landau has received notable praise for her initial pair of directing gigs. She helmed Take Flight, a documentary centering on the creative process of actor/director Gary Oldman, which drew rave reviews at a recent advance screening. Her co-direction of the Godhead music video, “Hero,” is garnering widespread Internet acclaim. She also has been busy at the keyboard, co-writing the Drusilla story line for the Angel comic books as well as scripting Its Raining Cats and Cats, a short film in which she intends to play seven different roles.

Christopher Meloni provides the voice of Hal Jordan, the alter ego of the title character in Green Lantern: First Flight. The cast includes Victor Garber, Tricia Helfer and Michael Madsen. Landau offers a Cajun-style vocal performance for Labella, a mistress of the seedier side of the universe in which the Green Lantern Corps patrol.

Landau and Meloni have worked closely together in the past, starring as brother and sister in the 1999 award-winning independent film Carlos Wake. Landau is also another member of the growing legion of Whedonverse actors to figure prominently in a DC Universe film. Among Whedon/DCU alums are Nathan Fillion, Adam Baldwin, James Marsters and David Boreanaz, with a few more on the DCU horizon.

Fortunately for the masses, Landau carved a few minutes out of her busy schedule to chat about voiceover work, the development of her Green Lantern: First Flight character, and the ability to grow and create in the entertainment business. So sit back and enjoy an intriguing Q&A with Juliet Landau

QUESTION: What is the enticement of voiceover for animation?

JULIET LANDAU: It is so much fun! You get to sit with a bunch of actors and play. Really play! Theres no hair and make-up, no primping just absolute, uninhibited creativity. Thats the real joy of acting. And it doesnt get any better than working with Bruce Timm and Andrea Romano.

QUESTION: Do you have a preference for the type of characters you play?

JULIET LANDAU: I like playing all different kinds of characters. Each one is its own little puzzle. Aliens are fun because you have a lot of freedom. The voice of Labella just came to me when I read the pages in a kind of organic in a way. I immediately felt like she had to sound the way I played her. When I came in for looping (pick up sound work) Andrea Romano described my Labella sound as honey-voiced. I think that really captures it. 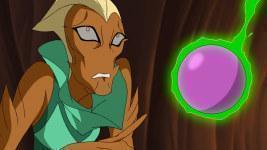 QUESTION: Tell us about Labella?

JULIET LANDAU: There was a lot of room for invention in this character, especially with the device they use with her. I dont want to give it away, but she does go through a bit of torture and it causes a rift between Sinestro and Hal. I really liked the sexuality and the flirtatiousness of the character. Shes very different from any of the characters Ive voiced on Justice League Unlimited or Ben 10: Alien Force shes a completely unique character.

QUESTION: You spent some time acting alongside Christopher Meloni as brother and sister in Carlos Wake. Do you have any good tales to tell about our Hal Jordan?

JULIET LANDAU:Carlos Wake revolved around a big Italian family gathering together at the patriarchs funeral. The immediate Torello family rehearsed at my house prior to shooting. I remember working on this funny scene where (Chris Melonis character) Benny tells me about his existential crisis while out on the fishing boats catching tuna. With despondency, he asks something like, What is it all for? And my character Anna, who was not the sharpest tool in the shed, says something akin to I thought it was sos we could have tuna salad sandwiches

Chris was flown to New York while we were shooting to meet with Garry Marshall about Runaway Bride. Upon returning, he came into the make-up room and told us about the meeting and we were all saying, It sounds like youre gonna get this! And indeed, he did.

QUESTION: When did you start comics writing, and whats the attraction of the written word?

JULIET LANDAU: My first foray into comics is a two-issue arc about Drusilla for Angel: After the Fall. I am co-writing with Brian Lynch and enjoying it immensely. The first issue will be out in July, the second in August. I have been working with 3 different artists on some of the imagery and cover art as well. I also wrote a short film called Its Raining Cats and Cats, which I will co-direct. Exploring these different facets of creativity has been truly inspiring. As an actor, youre a component; but when youre writing and directing, it is your vision of the whole project, which is very appealing. Take Flight has been an amazing experience. Gary Oldman directed a music video shot entirely on Nokia cell phones. Initially he asked me to direct the Making Of. But what started out solely as a behind-the-scenes Making Of, bloomed into a short documentary film about Garys creative process. He loves the movie because it shows him in a light hes never been seen. 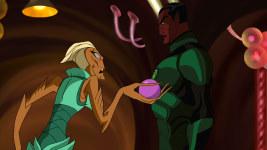 labella ball3.jpg
Labella fears the power of the purple sphere and what Sinestro intends to do with it in a telling scene from Green Lantern: First Flight, an all-new DC Universe animated original movie set for distribution July 28, 2009 by Warner Home Video. Actress Juliet Landau (Buffy: The Vampire Slayer, Angel) provides the voice of Labella.