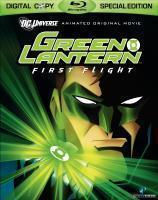 Above is the cover art for all three separate home video releases for the direct-to-video Green Lantern: First Flight animated feature. Further information on this latest DC Universe Animated Original Movie title can be found by clicking the images above. Click on the links below to discuss both the new Green Lantern: First Flight animated feature and the DVD and Blu-ray releases.

In related news, Robert Kral, composer for Green Lantern: First Flight, has confirmed for The World’s Finest that the newly-released direct-to-video animated feature will get an official soundtrack release. The soundtrack is scheduled for release in early September 2009. According to Kral, the Green Lantern: First Flight score soundtrack will see a limited edition CD release from La La Land Records and an iTunes download from New Line Records. Stay tuned for official details, expected as early as later this week. Also stay tuned for an exclusive interview with Kral, coming soon to The World’s Finest.

In continuing Green Lantern: First Flight-related news, the home video release for the new animated feature also includes a look at the next DC Universe Animated Original Movie title, Superman/Batman: Public Enemies. Click on the thumbnails below to view a selection of images from the “Superman/Batman: Public Enemies – First Look” featurette available on the Green Lantern: First Flight DVD and Blu-ray releases.