The track listing for the upcoming Superman/Batman: Public Enemies soundtrack download release from New Line Records, featuring the score from the direct-to-video animated feature of the same name, has been made available through iTunes. The soundtrack to the upcoming direct-to-video Superman/Batman: Public Enemies animated feature is currently available for pre-order on iTunes, with the expected release listed as tomorrow, September 29th, 2009. Please note both the release date and tracking listing content is subject to change. 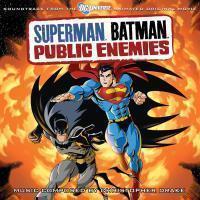 The purchase price for the entire Superman/Batman: Public Enemies soundtrack album-only download on iTunes is $9.99.

Verified details on the CD release for the Superman/Batman: Public Enemies score soundtrack from New Line Records are expected very soon. Continuing, La-La-Land Records has current plans to release the soundtracks to other DC Universe Animated Original Movie features, including the official soundtrack release for Green Lantern: First Flight next Tuesday, October 6th, 2009, with more tentatively in the works. A downloadable version of the Green Lantern: First Flight soundtrack is currently available on iTunes, through the New Line Records label.