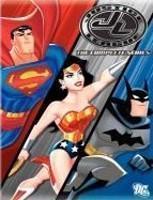 The Justice League comes together for the first time in one DVD collection as Warner Home Video and DC Comics release Justice League: The Complete Series on November 10, 2009 for $99.98 SRP. The giant 15-disc collectors DVD set includes all 91 action-packed episodes from the popular Justice League animated series and is loaded with exciting bonus features making it the perfect gift for this holiday season.

From the smash hit TV series, these triumphant tales of seven heroes united to become the Justice League will enthrall and inspire fans with over 35 hours of crime-fighting action from Justice League Season One and Two as well as Justice League Unlimited Season One and Two. Our favorite DC Super Heroes Superman, Batman, Wonder Woman, The Flash, Green Lantern, Martian Manhunter, and Hawkgirl join forces to fight evil across the galaxy inflicted by villains such as Lex Luthor, Vandal Savage and sorceress Morgaine Le Fey. Acts of justice include saving Aquaman from a coup and clearing Green Lantern’s name in a charge of genocide.

Warner Home Video is very excited to announce the release of Justice League: The Complete Series just in time for the holidays, said Amit Desai, WHV Vice President of Family, Animation & Partner Brands Marketing. The Justice League DVD box set is jam-packed with exciting episodes and hours of content which will be a wonderful addition to any fans collection and make a great holiday gift.

Justice League, and especially Justice League Unlimited, offered us a very fun, creative format in terms of the stories we could tell and the characters we could feature, said producer, Bruce Timm. We did smaller, more intimate tales and epic, cast-anybody-from-DC stories, and thematically we went everywhere from supernatural episodes to science fiction to straight-up heroic themes. It was our first series where we deliberately planned the character arc development from the start with long-term ideas, and were able to let the characters go where they would naturally and sometimes they surprised us. And because we had this huge cast to choose from, all of the characters stayed fresh because we had that much more room to experiment and expand. It kept the series from ever falling into a formula. I think this complete series package will be fun for fans to be able to see how the series rolled out from beginning to end, and get a true sense of the total scope of the show.

Justice League and all related characters and elements are trademarks of and DC Comics.(s09)

About Warner Bros. Animation:
Warner Bros. Animation (WBA) has been producing award-winning original animation since 1930, when it released its first cartoon, Sinkin’ in the Bathtub. Since then, WBAs characters have set the standard for innovative, quality animation. Producing for network and cable television, online, home entertainment and feature films both domestically and internationally, WBA is highly respected for its creative and technical excellence, as well as for maintaining the studios rich cartoon heritage. WBA also oversees the creative use and production of animated programming based on classic cartoon characters from the Hanna-Barbera and DC Comics libraries. WBA is one of the most-honored animation studios in history, garnering a grand total of six Academy Awards, 35 Emmy Awards, the George Foster Peabody Award, the HUMANITAS prize, two Prism Awards and 20 Annie Awards.