The new DVD collection Superman: The Complete Animated Series is now available to own. Stay tuned to The World’s Finest and The DC Animation Forum for further updates, including exclusive content and details.

Warner Home Video has officially released details on Justice League: Crisis on Two Earths, the next release under the direct-to-video DC Universe Animated Original Movie banner, along with details on the animated short DC Showcase: The Spectre. Further details are available in the press release below, along with a new image and the full-length trailer. 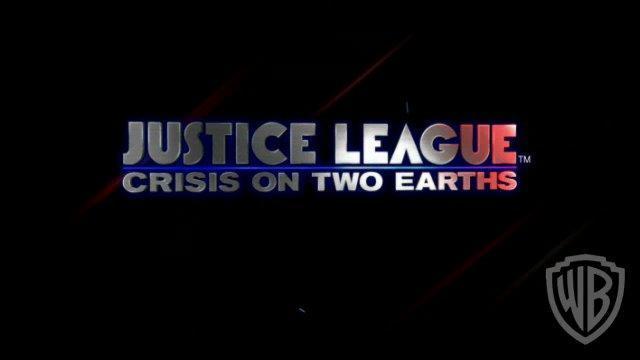 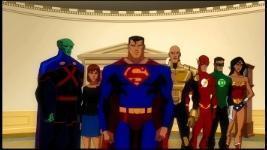 To save our world and all those like it, Superman, Batman and their caped colleagues must go toe-to-toe with their evil mirror images in Justice League: Crisis on Two Earths, the seventh entry in the successful ongoing series of DC Universe Animated Original PG-13 Movies coming February 23, 2010 from Warner Premiere, DC Comics and Warner Bros. Animation. The full-length animated film will be distributed by Warner Home Video as a Special Edition 2-disc version on DVD and Blu-Ray Hi-Def for $24.98 (SRP) and $29.99 (SRP), respectively, as well as single disc DVD for $19.98 (SRP). The film will also be available On Demand and Download.

In Justice League: Crisis on Two Earths, a good Lex Luthor arrives from an alternate universe to recruit the Justice League to help save his Earth from the Crime Syndicate, a gang of villainous characters with virtually identical super powers to the Justice League. What ensues is the ultimate battle of good versus evil in a war that threatens both planets and, through a diabolical plan launched by Owlman, puts the balance of all existence in peril.

–DC Showcase: The Spectre – The first animated short in the all-new DC Showcase series focuses on a detective story with an ethereal twist, featuring the otherworldly character originally introduced by DC Comics in 1940. The short is written by Steve Niles (30 Days of Night), and the voice cast includes Gary Cole (Entourage) and Alyssa Milano (Charmed).

-Featurette The New World: From Identity Crisis forward, DC Comics raised the stakes with talent writers, editors and artists pushing the boundaries of what it means to be a modern day Super Hero. This documentary covers the riveting and often harrowing tale of New York Times bestselling author Brad Meltzers Identity Crisis, and why this story struck the right chord with the comic book audience. The story is a personal one for the creator, as well as the DC Comics executives fortunate enough to have been a part of this mature comic book publication. While revealing the strategy and sentiments behind this comic book, the documentary film goes a step further to explore the continuing and recent publications of Infinite Crisis and Final Crisis, while crafted with the narration of The Dark Knight Executive Producer Michael Uslan. The tension is high, the story is personal, and the stakes have been raised!

Justice League: Crisis on Two Earths Blu-Ray versions will have more than three hours of bonus materials, including all the great extras from the 2-disc Special Edition and two additional episodes from Justice League Unlimited, both personally selected by fan-favorite Bruce Timm, plus television pilot episodes from the DC live-action shows: Wonder Woman, and Aquaman.

Were very excited to present an original story from renowned writer Dwayne McDuffie that takes the Justice League mythology and spins it on its ear with parallel worlds echoed in so many classic DC Crisis tales, said Gregory Noveck, Senior VP Creative Affairs, DC Comics. This is a thinking mans hero movie with a set of villains determined to succeed and one focused on complete intergalactic annihilation so just as the stakes are that much higher, so is the intensity of the action with these legendary characters.

The co-direction of Lauren Montgomery and Sam Liu merges the best of the last three DC Universe films with a fine balance of intelligence, emotion and more action than even two Earths can handle, said Sam Register, Executive Vice President, Warner Bros. Animation.

DC SUPER HEROES and all related characters and elements are trademarks of and DC Comics.(s09)

Click on the thumbnail images below to view clips from the recent Justice League: The Complete Series and upcoming Superman: The Complete Animated Series DVD collections. Please note both clips require Quicktime to play.

A selection of images from the recent Justice League: The Complete Series DVD collection release are available below, including a look at the package art, menu system and art for the bonus disc exclusive to this title. This new DVD collection encompasses every episode from both Justice League and Justice League Unlimited into one package. Click on the thumbnails for a closer look.