hosted by popgeeks.com | Ada Wong was originally going to be in Resident evil VILLAGE *Spoilers* The Next Epic Spell Wars Of The Battle Wizards Product Is Coming
Batman: Under the Red Hood Blu-ray/DVD/Digital DC Universe Animated Original Movie

Click on the thumbnails below to view images of the back cover artwork for the upcoming Two-Disc Special Edition DVD and Blu-ray releases of the direct-to-video Batman: Under the Red Hood animated feature. Batman: Under the Red Hood is the latest title under the popular DC Universe Animated Original Movie direct-to-video line released by Warner Home Video. 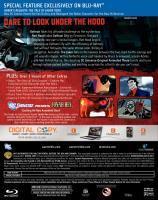