The World’s Finest presents an all-new studio-conducted interview, provided by Warner Home Video, for the Batman Beyond: The Complete Series DVD collection release, available to own on Tuesday, November 23rd, 2010 for a limited time. Continue reading below for an interview featuring Will Friedle, the voice of Batman in the acclaimed Batman Beyond animated series.

Will Friedle chats about his time in the Batcave;
Batman Beyond: The Complete Series on DVD Tuesday, November 23
Will Friedle took a futuristic Dark Knight in altogether new directions as the voice of Terry McGinnis in Warner Bros. Animations breakthrough 1999 series Batman Beyond. 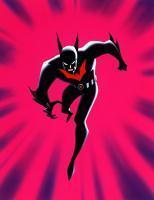 The popular voiceover actor took time last week to speak about his days as the new Caped Crusader in preparation for the Tuesday, November 23 release of Batman Beyond: The Complete Series, a nine-disc limited edition DVD set that presents nearly 20 hours of animated action spread over 52 episodes, as well as including all-new bonus featurettes and a 24-page, 8x 12 collectible booklet.

Batman Beyond: The Complete Series centers on Terry McGinnis, an ordinary teenager … until his father is mysteriously murdered. Suspecting foul play at his father’s company, Wayne/Powers Corporation, Terry meets Bruce Wayne and learns of a secret identity hidden for decades. Now too old to don the cape and cowl as Batman, Wayne refuses to help so Terry does what any brash young kid would do: steal the Bat-suit and take matters into his own hands! Vowing to avenge his father’s death, Terry dons the high-tech suit tricked out with jetpacks, a supersensitive microphone and even camouflage capabilities in search of his father’s assassin.

Friedle made his mark in live-action television and film from the time he turned 10, starring in hit series like Boy Meets World and Dont Just Sit There. He gradually shifted his attention to voiceover work, taking the lead in Batman Beyond and co-starring in Disneys Kim Possible to name but a few. Today, he primarily stays behind the microphone, voicing such notable roles as Doyle on The Secret Saturdays and Blue Beetle on Batman: The Brave and the Bold.

QUESTION: When you think back on all those Batman Beyond sessions, what are your favorite memories of recording the series?

WILL FRIEDLE: This sounds like a cheesy answer, but working with Andrea (Romano) is just the greatest experience. Every week you go in and its amazing and fun. You just never knew who the guest cast would be. My favorite was recording Return of the Joker. Sitting between Kevin Conroy and Mark Hamill for five days was pretty incredible. I learned more about being a voiceover actor in those five days than I did in the five months before that. Just watching the two of them work how Mark got so into the character, completely losing himself in that role. And then theres Kevin with that deep, booming voice, always sitting with his back straight and working perfectly with the microphone. It was an education.

QUESTION: Do you have a favorite Batman Beyond episode?

WILL FRIEDLE: There was an episode called Out of the Past where its Bruce Waynes birthday and as a birthday present Terry takes Bruce to see a new play, Batman: The Musical. So theres Bruce sitting in the audience, watching these people in costume jumping on stage, singing about the Dark Knight, and Terrys right behind him humming the songs. And Bruce just hates it. Seeing Bruce Wayne watching Batman: The Musical was pretty funny. 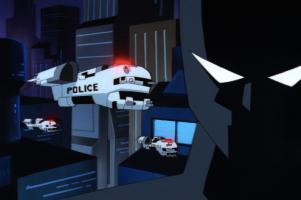 QUESTION: Were you a fan of Batman: The Animated Series before you were cast for Batman Beyond?

WILL FRIEDLE: I have been an animation fan my whole life. Love cartoons, always have. But I thought Batman: The Animated Series changed the whole ballgame. Every generation thinks they grew up with the best cartoons I had Thundercats and Transformers, shows like that. Very bright, and the acting was very big. But then Batman came out and there was nothing cartoony about it. The acting was very real and the overall feel of the show was dark. It was like nothing youd seen before, and I was a huge fan of the show. This was pre-Tivo, so this was one of those shows where you had to see it every day. You didnt want to miss an episode. So when I got a call to be the voice of a new Batman, and the series was being made with the entire team that did Batman: The Animated Series, well, that was huge.

QUESTION: You spent a lot of time with Kevin Conroy over the course of the series. What was that experience like for you?

WILL FRIEDLE: First of all, Kevin is a classically trained actor. Hes very professional. Ive had the good fortune of working with several characters like that, but Id never done an animated series before, and I was kind of slumped in my chair saying my lines. And Kevin started giving me tips. Simple things, but things that really make a difference. For example, he had me sit up straight, and showed me how that helps open your diaphragm naturally. Little things you look for in an actor of his caliber like the right ways to play to the page, the right ways to not pop your Ps. He was nice enough to take me under his wing and teach me, and Ill never forget him for that.

QUESTION: What set Batman Beyond apart?

WILL FRIEDLE: To me, it always goes back to the writing. Batman Beyond was so strong that you couldnt wait to get the script for the next week. The character development was outstanding from the new villains theyd invent to the way they brought back the old villains. And the way they treated Terry and Bruce, and their relationship. The casting was phenomenal, but even the greatest actors cant make bad writing good so it all comes down to what was on the page, and thats where Batman Beyond became a great show.

QUESTION: How important are super heroes to you?

WILL FRIEDLE: I love super heroes, and Batman was always my favorite. I was never a huge Superman fan. I like the idea that Batman was just a man. He doesnt have super powers. As youre reading comics or watching animated series, I think you normally gravitate toward one or the other. But for me, it came down to this: Superman had to come from another planet to save us. Batman said Look what we can do for ourselves with our heart and mind and soul, we can save each other.

QUESTION: Why are super heroes important to society?

WILL FRIEDLE: I love to read. Im a voracious reader. I think the super hero genre is really our modern day Greek mythology, These are our gods; this is Homer writing the Iliad. Weve got super heroes; they had gods. From a literary standpoint, this is the next generation of mythology. From a fan standpoint, with authors like Robert Jordan and Brandon Sanderson and even the Harry Potter series, a great fantasy book just takes you away. You can disappear into an entire world where you can forget what is going on in your world. For kids, I think it teaches a sense of right and wrong. For the most part, these stories are tales of good vs. evil. Thats important for kids to see what is good and bad, and how it can be fought without violence. And just for the fun of it all, who doesnt want to get lost in a great book or series? 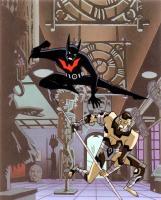 QUESTION: So now youre back in the super hero realm and Batmans universe on Batman: The Brave and The Bold. How do you like your role as Blue Beetle?

WILL FRIEDLE: Blue Beetle is a ton of fun to play. I wasnt totally familiar with the character, but I studied up for the role quickly. Its been tricky because we wanted to make sure that we played to Jaime Reyes heritage as he is the first real Latino super hero but we didnt want to do a cartoony Latino voice. But at the same time, you also have to make him Hispanic. So there was more riding on this role. Terry could be created in any way, shape or form. Jaime had already been established. Its not a heavy character, but theres more of a history. So to step into a world thats already established was more difficult than creating a character from the beginning.

QUESTION: Youve been solely focused on voiceover roles for several years. Are you no longer interested in on-camera acting?

WILL FRIEDLE: I retired from on-camera work at 30. Plain and simple. I started acting on camera when I was 10, so it had been 20 years. I really enjoyed it, but the on-camera side of the industry isnt as fun anymore its definitely not the same as when I started. Im now more established in the voiceover world, and I get to do it in a far more fun, more fulfilling way. I think I went out on a high note. I was still doing films and television series and I thought Id rather walk away when it was my choice. I know youre never supposed to say never, but I can pretty much say never to on-camera again.

QUESTION: Whats the best thing about playing a super hero?

WILL FRIEDLE: At the time we were doing Batman Beyond, I thought the coolest thing was telling my nephews I was Batman and not being lying to them. One time, my oldest nephew Huck came out from Brooklyn. He pulled me aside and said Look uncle Will, I want you to know Im six now. I think Im old enough to see the Batcave. He actually thought I was Batman, which is very cool. It cant get much better for an uncle.

A review for the upcoming Batman Beyond: The Complete Series home video collection release can be found at The World’s Finest Batman Beyond subsite, with additional to exclusive images and content also available to view. Further details on the Batman Beyond animated series are also available at the aforementioned links.