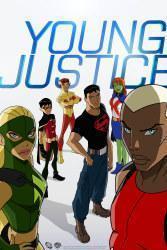 A new brief synopsis for two-part opener has been released:

Teenage superheroes Robin, Aqualad, Kid Flash, Superboy, Miss Martian and Artemis test their true potential as heroes in the pilot episode of this animated series based on characters from the DC Comics universe.

“In Young Justice, being a teenager means proving yourself over and over — to peers, parents, teachers, mentors and, ultimately, to yourself. But what if you’re not just a normal teenager? What if you’re a teenage super hero? Are you ready to join the ranks of the great heroes and prove you’re worthy of the Justice League? Thats exactly what the members of Young Justice Robin (aka Dick Grayson), Aqualad (aka Kaldur’ahm), Kid Flash (aka Wally West), Superboy (aka Conner Kent), Miss Martian (aka M’gann M’orzz) and Artemis will find out, whether they have what it takes to be a proven hero.”

The two-part Young Justice episode event “Independence Day” is scheduled for Friday, November 26th, 2010 at 7:00pm (ET). Following this special airing, Young Justice is then slated to become a regular fixture to the Cartoon Network Friday-night programming block beginning in January 2011. Please note that Batman: The Brave and The Bold, a regular Friday night fixture on Cartoon Network, will be pre-empted on Friday, November 26th, 2010 due to this special programming event.

Stay tuned for further Young Justice updates here soon at The World’s Finest, including exclusive content and much more.

Follow The World’s Finest on Twitter and Facebook!
“Batman: The Brave And The Bold” Producer James Tucker Exclusive Interview Closer Look At “Batman Beyond: The Complete Series” Home Video Collection